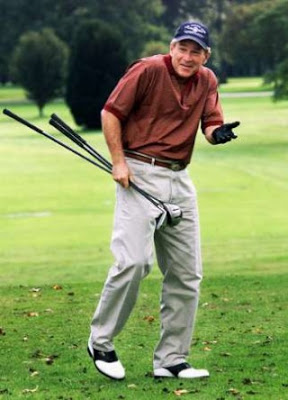 WASHINGTON — US President George W. Bush said in an interview out Tuesday that he quit playing golf in 2003 out of respect for the families of US soldiers killed in the conflict in Iraq, now in its sixth year.

“I think playing golf during a war just sends the wrong signal,” he said in an interview for Yahoo! News and Politico magazine.

“I don’t want some mom whose son may have recently died to see the commander-in-chief playing golf,” he said. “I feel I owe it to the families to be in solidarity as best as I can with them.”

The US president traced his decision to the August 19, 2003 bombing of UN headquarters in Baghdad, which killed the world body’s top official in Iraq, Sergio Vieira de Mello.

“I remember when de Mello, who was at the UN, got killed in Baghdad as a result of these murderers taking this good man’s life. And I was playing golf — I think I was in central Texas — and they pulled me off the golf course and I said, it’s just not worth it anymore to do,” said Bush.

Bush’s last round of golf as president dates back to October 13, 2003, according to meticulous records kept by CBS news.

On the day of the bombing two months earlier, he had cut short his golf game at the 12th hole and returned to his ranch in tiny Crawford, Texas.

This entry was posted in RagBlog and tagged Bush, Iraq, Sports. Bookmark the permalink.