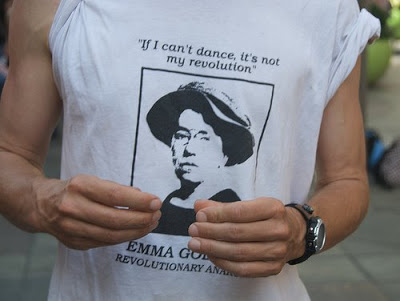 ‘Where is your independence Sen. Obama, where are the names of Joseph Stiglitz or Paul Krugman who for months have been warning of the present economic meltdown?’
By Dr. S.R. Keister / The Rag Blog / November 8, 2008

John Reed and Emma Goldman where are you when we need you? Milton Friedman smiles in his grave. President elect Obama is considering “economists” for financial advisors and for the Treasury Department, Wall Street insiders, that were adherents to the doctrine of unfettered Capitalism and have brought us to the brink. Where is your independence Sen. Obama, where are the names of Joseph Stiglitz or Paul Krugman who for months have been warning of the present economic meltdown?

As one who believed in, and worked for, your election, am I now to believe that this will be Washington as usual, favoring your Wall Street contributors rather than those millions of small folks who gave out of hope and belief? Is it time for a Camille Desmoulins to leap upon a table and reenact the events of July14, 1887? If so, recall The Place de la Concorde of 1793!

One would have hoped that a new White House advisor would not be an adherent of AIPAC and a product of the 1990s. One would trust that one does not see the followers of Leo Strauss appointed to positions in the Defense and State Departments. One would hope for complete clarity as to why we have squandered nearly eight years in Iraq. Not only do we need a plan for withdrawal, but the American people deserve a full explanation of the geopolitical reasons for the neocon/oil company ploy that underlay the invasion.

Was the war predicated on territorial control or merely oil company profits? Why the continued American presence in Afghanistan? No rational person can believe that Bin Laden, a child of privilege and wealth, has been sitting in a cave for eight years, if indeed he is still alive. Karzi is of course impotent and realistically can never head a ‘democratic government.” The Afghans have resisted outside domination for centuries, Alexander the Great, the Mongols, the British in the 19th Century, and the Russians of late; hence, why is the United States there? Are we protecting oil pipelines or has it to do with sharing in the narcotics trade?

Is it time for a Nuremberg-like tribunal to look at the malfeasance of such folks as Phil Gramm, Alan Greenspan, Chris Cox and Henry Paulson? It is time for inspiring Congress to immediately revise the pre-election, multibillion bailout package for the Wall Street firms and big banks, to reward the taxpayer, and stop the funds from being funneled to the institutions that caused this financial mess, being used for executive rewards, stock-holder dividends, and acquisitions. We need independent government observers to oversee the distribution of these funds? The Europeans have government observers in place in their institutions.

It is time to consider a realistic single payer, universal health care program, as per HR 676, and Physicians For A National Health Program. It is time to rid our country of the insurance industry that sucks up the health care dollars as profit. Were these insurance companies campaign contributors? We in the United States should not rank 26th in the world on health care delivery. We should not have nearly 50 million citizens without adequate health care. We deserve the excellence of health care that is available in the Western European countries. Let us see members of PNHP within the upper levels of the Obama administration. This is not a time to punt and knuckle under to the insurance and pharmaceutical lobbies.

Finally, it is way past time for an INDEPENDENT investigation of the tragedies of 9/11. In no other time in the history of our nation has an episode of this magnitude been swept under the rug. At no other time would the naive citizens of this nation have stood by and ignored the lack of such an investigation.

At the same time it should be a priority to challenge the need for the United States to be an Empire with over 700 overseas military bases, many with 18-hole golf courses. Do we need a military budget equaling that of all the world’s other nations combined? Would not aggressive diplomacy reduce the need for such military spending and free funds for care of our citizens at home re: health carte, education, public health, infrastructure repair, and providing decent rail transport as within the E.U. or Japan?

One hopes that our country does not experience the events of St. Petersburg in 1919; however, inaction, procrastination, misrepresentation, and placement of the perpetrators of our impending financial meltdown in the government very well could produce such an event. We are close to falling into the abyss. Look at your IRA or your savings plan, and realize that the day of total collapse may be nearby.

It is time for a native Mirabeau to step forth.

This entry was posted in Rag Bloggers and tagged Economic Recovery, Obama Presidency, Progressive Movement, The Left. Bookmark the permalink.