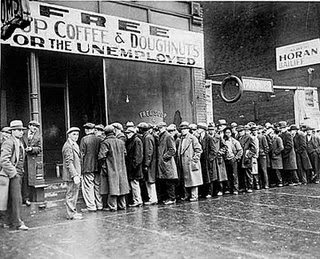 It has been like a long Christmas morning since the evening of the November 4th Democratic victory. Tens of millions of us basked in a new feeling of peace on earth and good will toward men. But by now we have already taken off almost all the political ornaments, tinsel and flashing lights from our early stand-in Christmas tree, and have packed them away for another four years.

Don’t expect pretty incentive packages under America’s real Christmas trees this year. This New Year’s day, millions of households will face post-holiday blues not felt in more than half a century. Frigid winter’s increasing chill will punctuate our deep economic crisis. We are slowly realizing that no immediate rescue is in sight. We are stuck with Bush and company till late January next year. The new Obama administration will require time to get effective plans underway. “Maybe some mortgage relief in a few months,” say the hopeful. Meanwhile we watch the daily terrifying cycle of vanishing credit, no one spending leading to layoffs and store closures, leading to a dimmer and dimmer future.

Imagine an early TV broadcast of June Evelyn Bronson Cleaver, of all people, having to tell Beaver and Wally that it will be one present Christmas. Ward still has his job, but he had to take a steep cut in pay and his company pension fund is dwindling daily. Already more than half of the Cleaver’s neighbors have packed up and left as the foreclosure signs went up. June’s spinster aunt, Martha, has had to divide her prescription drug medicines to every other day because there is just not enough money, even living alone. It is the last show of their season and we don’t get to see the ending.

For today’s real families there is no way to leave it to Beaver. Millions of Americans are slowly being reduced to the basics of just having enough to eat, and trying to stay warm. Crime rates are predicted to climb as many normally law abiding people resort to doing what they think it takes to feed their families. As dark times of scarcity face us it is imperative we not lose that newly rekindled sense of hope seen across our nation on the evening of November 4th.

“Yes We Can” requires that we all work together as a connected string of individual bright lights that refuse to burn out as a new Obama administration tackles the huge stack of problems that face us. All Americans regardless of political stripe must find that inner energy, powered by our pride and hope, to keep that essential string of lights burning to fight the darkness we face. Decades of unregulated financial dealings that led to today’s economic nightmare will take a long time to clean up and repair. Bad habits in Washington will have to be broken, and lots of sticky fingers and downward pointing thumbs on Capitol Hill should get broken as well.

The brightest light of all for America would come from a vigorous effort to bring criminal charges against the Bush administration and the neo-conservative, Constitution-trampling knot-heads who need to pay for the serious damage they have done to our great country. For them to ignore subpoenas, wait out the clock, smugly return to their super wealthy protected enclaves as though nothing culpable had happened is not right.

Actually charge and prosecute the powerful? Yes We Can.