The Explosion at the Shrine of Rahman Baba 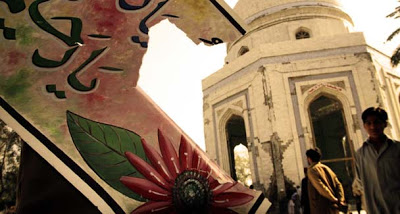 Some time before dawn on the 5th of this month, there was an explosion in the main building at the ziyarat, or shrine, of ‘Abd-ur-Rahman in Hazar Khwani village, North-west Frontier Province, Pakistan. While explosions have become despairingly common in this general region, with Taliban-inspired networks proliferating among the majority Pashtun ethnic group, this particular explosion shocked many commentators. It did so not only because the village was located in a fairly secure area, but also because Rahman Baba, as the saint was better known, was something of a symbol of peace in the Pashtun regions of Pakistan and Afghanistan, and his poetry continues to be one of the sturdiest foundations of Pashtun cultural heritage.

Since the bombing a variety of commentators – some in Pakistan and especially western observers – have read this event as a war between two cosmically separate factions of Islam. In a piece in The Observer on March 8th, William Dalrymple’s headline claimed that “Wahhabi radicals are determined to destroy a gentler, kinder Islam.” The article argued that a wholesale Saudi-funded importation of “madrasa student” ideology threatens a somehow more authentic Pakistani Islam based on a tolerant Sufism.

I disagree with both the reifications of pundits such as Dalrymple and those of certain sections of the critical Pakistani intelligentsia, at least in part. In my recent experience living in and around Peshawar and the NWFP, I sensed that one major social fault line in Frontier Islam is something more basic. In many cases, working-class and service-industry people belonging to the Deobandi school of thought, which casual commentators often conflate with “radical Wahhabism,” proved to be among the gentlest and most generous people I met in Pakistan. In my extended interactions with certain such people, even though they belonged to proselytizing groups such as the Tablighi Jama‘at this membership did not color their interactions with me as a person.

I noticed, instead, a split between those who focused on the social role of their Islam as an analytical and activist tool to create social movements; and those for whom Islam was a humanist experience. Simply put, it was abstracted social-centric Islam versus concrete people-centric Islam. Social-centric Islams of all stripes, moderate or radical; their largely middle-class propagandists, and their populist adherents tend to say a similar thing. That is, they hold that reform of superstitious customs – including shrine pilgrimage – will help poor people better their material lives and create a more just social order. In seeking to forcibly enable an abstract vision of purist religious and social reform for people in a highly unjust political and economic environment, paradoxically the radical faction responsible for this blast probably never stopped to think about actual people.

This for me is the real tragedy of the symbolic attack – for there was little real damage – on Rahman Baba’s ziyarat. For me, an American Muslim academic who has studied the Pashto language, it was my favorite place in Pakistan exactly because of its people-centrism.

One of the Masters students in the Pakistan Studies program at Peshawar University lives in Hazar Khwani village where the tomb is, and in 2005 he invited me to visit his family there. I’d prefer not to mention his name, since association with Americans is no longer something that people would wish others to know about. After several languorous hours of the legendary Pashtun hospitality, a sizable group of us went to the shrine to say a fatiha prayer for Rahman Baba.

One reason I love the shrine is the personality of Rahman Baba himself, as reflected in his poetic work. A couple of lines that illustrate well a social religion grounded on a genuine love for individuals and personalized devotion are the following. The version sung by Qamar Gula, an Afghan woman singer in the 1970s, is my favorite:

Who ever heard of two lovers like this / Where one cursed the other; while the other prayed for the first

The following lines may be among the most widely known bits of Pashto poetry anywhere. A fair number of Pashtuns I have met know this passage by heart:

Plant flowers where you live, so that your region is a flower garden / Don’t plant thorns or they will stick in your feet

The shrine is located where Rahman Baba and his disciples used to meet. And whether or not he planted the garden himself, Rahman Baba’s shrine complex sits in a grove of deciduous trees – sycamore, poplar, and eucalyptus – interspersed throughout an ancient graveyard. Rahman Baba purportedly had the ability to communicate with animals due to his gentleness, and even now, when people have birds that are suffering from any form of ailment, they bring them to Rahman Baba’s forest to recuperate. There is a special very large aviary constructed in and among the trees for this purpose. I imagine these innocent creatures were spared on the dawn of the 5th. There were a few buildings in between the aviary and the main mausoleum which might have sheltered them from the blast. 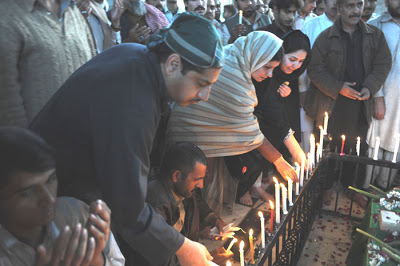 Rahman Baba’s shrine complex had none of the ostentation of most South Asian shrines. The sober austerity struck me as very “Pashtun” – not at all like the stereotype of a sensuous, mystical “Sufi Islam” as opposed to some other essentialized “strict Islam”. The shrine complex consists of a number of small cube-shaped whitewashed buildings, and a large marble mausoleum structure sponsored by the Saudi government in 2001 or 2002. If there was much beauty, it was mainly located in the trees and the sunlight filtering through, and in non-visual adornments granted not by wealthy donors but by the participation of everyday visitors.

Instead of visual ostentation, the main decoration was verbal. Much like the Persian poet Hafiz of Shiraz, Rahman Baba of Hazar Khwani wrote poetry that is still used daily by people today for inspiration in coping with their problems. People do a niyat – meditate on their problem – and then open Rahman Baba’s diwan, or poetry collection, to find a couplet at random. Almost invariably it helps (and the couplets above give only the most rudimentary sense of the gentle sorts of “advice from beyond” that the diwan contains). I myself have kept a copy in my office. It got me through a difficult year of teaching full time and advising students for the first time. In any case, after this exercise, if the couplet has been helpful, supplicants often visit the shrine complex and commission that couplet to be painted in green lettering on the whitewashed walls of the small boxlike buildings there.

My inlaws from the lowlands of the (ethnically very different) Punjab province sometimes gently poked fun at me, a historian, visiting the NWFP for research. I remember one asking incredulously, “What are you going to see there? There’s nothing but Pashtuns!” His point was that unlike the Punjabi city of Lahore, for example, Peshawar and the surroundings offer little in the way of glorious monuments or iconic cityscapes (with a few notable exceptions). For him, and for too many others, those things are what history is all about. Ergo, in this view, Pashtuns have no history. But personally, I draw the most inspiration in my work from reflecting on various modalities of verbal culture. And there are few societies on earth that have produced the sort of oral-historical, poetic patrimony that Pashtun society has – language-based monuments so socially intimate that most outsiders will never appreciate them, or even see them. “Wildflowers blooming, ignored, in the wasteland” is the analogy used in the title of a mid 1980s poetic anthology, as well as a paraphrase of words that the legendary peace activist Khan ‘Abd-ul-Ghaffar Khan once used to describe his people. For this other reason the shrine struck me as a very “Pashtun” monument, stripped of everything but those beautiful green words on white, words which meant the world to someone in an hour of need. It is this people-centric Islam that was under attack, an Islam that cuts across sectarian divides and invites Wahhabis and all other Muslims alike to imagine each other as fellow humans above all else, complex and unique. Though this was not true of everyone, many so-called ‘Wahhabis’ I knew answered that invitation with a soft and understated “yes”, and coexisted with the more socially marginal figures who managed this space full-time.

After our group paid our respects in the mausoleum, we met a large group of malangs, or ascetics/hermits. They were chopping wood at the time, in preparation to cook lentil soup for the evening charity kitchen. There was already a fire going, and I detected hashish fumes mixing with the mesquite smoke. The malangs put down what they were doing and made us some milky tea, without any request on our part. It was the first time I’d ever had a substantive discussion with malangs. It mainly pivoted on my telling one of the malangs that even in the US, some of us study the poetry of Rahman Baba. The malang I was speaking to – in true ego-denying form, he never offered his name – was not surprised. He said, “Of course, he is a great friend of God. Even in America he must be famous.”

One photo I took of the main mausoleum is my favorite among all those I took in my entire time in Pakistan. Quite by chance, I hit the camera button at the exact moment when two friends were greeting each other in an embrace, which is exactly the feeling I get when I open Rahman Baba’s diwan. Looking even more closely one notices two women in brown burqas, mostly obscured by shadows, between two flags off to the left. This almost unnoticeable presence is part of what so outraged the new crop of ‘religious students’, the literal meaning of the word ‘taliban’. Superstition and saint veneration was objectionable enough; but according to what I’ve read of the event, the thought of women engaging in these activities, in public, appears to have been the trigger for this bombing. The act, therefore, consisted of two parts. The perpetrators viewed women as a social category to be reformed, not as individual people with individualized spiritual needs; and they viewed individualized Islam, grounded in actually-existing people, to be beside the point. In attempting to destroy this shrine, or to discourage attendance at it, they saw no value in the relationships expressed here.

For me at least, Rahman Baba the man is not the object of veneration; Rahman Baba the tradition is. To me Rahman Baba was a geographic focal point which communicated all the individual desires and hopes that passed through society. The saint is immortal because of his words; and his words are immortal partly because their presence in that concrete physical space engenders a personal connection to other individuals regardless of sectarian or socioeconomic or even temporal boundaries. For this reason, an attack on Rahman Baba’s ziyarat hit me especially hard. Despite all the distance between my life and that of Hazar Khwani village, I felt that I had added my own presence to that of countless other specific individuals. When I saw the news of this bombing, I felt as if I was seeing the participatory history of unique people, with individual pains and individual dreams, being replaced by dogmatic abstraction. For this reason, it would be a true shame in my eyes if popular and critical analyses of this, and other such, events also replicated a typology-based worldview, with ideological labels like “Deobandi” or “Barelvi” or “Wahhabi – not actual people – at their core.

[James Caron is in the Ph.D. Program of S. Asia Studies at the Univ. of Pennsylvania.]

This entry was posted in RagBlog and tagged Islam, Pakistan, Religion, Taliban, Terrorism. Bookmark the permalink.