The Meaningful Way to Combat Terrorism 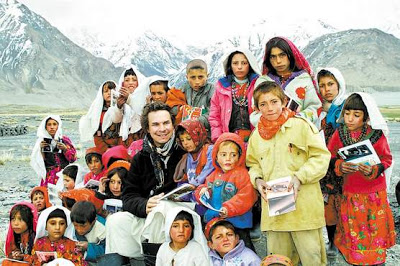 Greg Mortenson, shown with students from the Sitara School he established in northeast Afghanistan in 2005, says education is the best ammunition against misogynistic terrorist regimes like the Taliban. Photo: Greg Mortenson.
Build relationships, author tells cadets
By Alexa James

WEST POINT — Author and activist Greg Mortenson introduced himself to an auditorium of Army cadets, then told them how to win in Afghanistan:

Mortenson met with students in West Point’s Counterinsurgency Operations class on Tuesday to discuss his humanitarian work in Central Asia and his best-selling book, “Three Cups of Tea.”

The Army veteran explained: “First cup you’re a stranger, the second cup a guest. On the third cup you become family.”

“That doesn’t mean you just go around drinking tea and having peace and freedom in the world,” he said. “What it means is, you have to build relationships.”

Mortenson, 50, has spent the last 16 years establishing schools in volatile regions of Afghanistan and Pakistan. He’s been kidnapped by feuding tribes, questioned by the CIA and lambasted by foreigners and Americans alike. But through his nonprofit Central Asia Institute, he established nearly 80 schools for some 28,000 boys and girls.

Education, he says, is the best ammunition against misogynistic terrorist regimes like the Taliban. “We can drop bombs or hand out condoms or build roads,” he said, “but if we don’t educate the girls, nothing is going to change.”

Mortenson is not alone in this thinking. He works closely with U.S. commanders on counter-insurgency strategies that consider local customs. On a large screen in the auditorium Tuesday, he talked the cadets through slides approved by the Pentagon specifically for the West Point lecture. The diagrams outlined the complex overlay of tribal and ethnic allegiances in Afghanistan and Pakistan and the ways the Taliban extorts the system to build new allegiances.

Combating that societal shift, Mortenson said, will force American leaders to adjust their policies, too. “Sometimes things seem very unconventional, they seem very risky, like talking with the Taliban. Often, those are where the solutions are.”

Mortenson criticized Secretary of State Hillary Rodham Clinton for ignoring Pakistan and Afghanistan on her recent visit to Asia. He also disparaged the previous administration for refusing to talk with enemies.

And in turn, some of the cadets challenged Mortenson’s approach, pushing him to account for well-educated terrorists, such as those who hijacked the airplanes on September 11.

Intense debates over social and military doctrines are the bread-and-butter of this counterinsurgency course. Maj. James Spies, a Special Forces soldier-turned-professor, encourages his students to question everything and expect change. “What applies this week in Iraq,” he said, “definitely doesn’t apply this week in Afghanistan.”

And it won’t apply to sophomore Tim Clark, 22, when he graduates from West Point. Relying on expertise from those inside and outside the Army’s circles is “vitally important,” he said. “I think Mr. Mortenson is dead on in saying that you need to build relationships.”

Thanks to Rebecca Jehn / The Rag Blog

This entry was posted in RagBlog and tagged Education, Peace, Taliban, Terrorism. Bookmark the permalink.

2 Responses to The Meaningful Way to Combat Terrorism