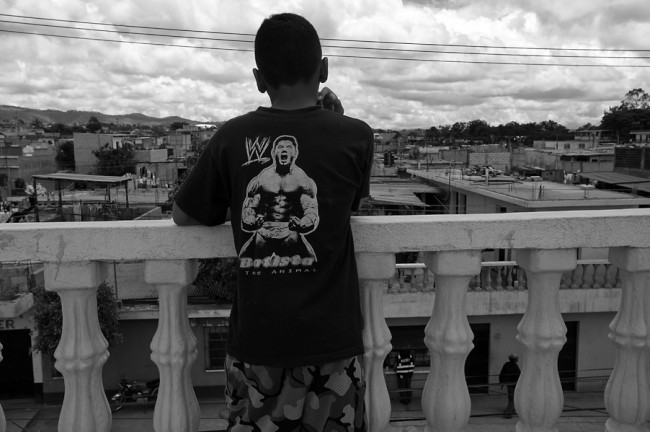 De Novo illustrates the experience of an undocumented immigrant youth.

AUSTIN —  De Novo, a documentary play on immigration, will be performed at 7 p.m., Friday, October 16, 2015, at the Utopia Theater in the UT-Austin School of Social Work, 1925 San Jacinto.

De Novo, a documentary theater piece written by Jeffrey Solomon and produced by Houses on the Moon Theater Company, was crafted from immigration court transcripts, letters, and interviews conducted by the theater company with so-called “alien” children (and their advocates) in immigration proceedings in New York, Arizona, Colorado, and Los Angeles.

The play illustrates the experience of an undocumented immigrant youth who fled from Guatemala to the United States in order to escape gang violence and find his mother. The play is performed by bilingual actors in English and partly in Spanish.

Patrick Maley wrote in Stage Magazine that, “From the gangland to the courtroom to the stage…, the story of young Edgar Chocoy proves treacherous, pitiable, and… at all times gripping… Insightful, enlightening, and often riveting, De Novo forces us to reconsider the nameless faces of gang violence, the forces behind the waves of illegal child migration from Central America, and above all the notion of ‘choice.'”

The performance features the images of Donna DeCesare, a UT-Austin journalism professor and an award-winning photojournalist known for her groundbreaking coverage of the spread of Los Angeles gangs in Central America.

The play, hosted by the Teresa Lozano Long Institute of Latin American Studies, will be followed by a talkback with actors and immigration advocates.

For more information, go here, and check out the Facebook page here. Watch a YouTube clip from DeNovo here.

For information on the use of this play in high school and college curriculum, and to reserve seating for class groups, contact Lindsey Engelman at lengelman@austin.utexas.edu.