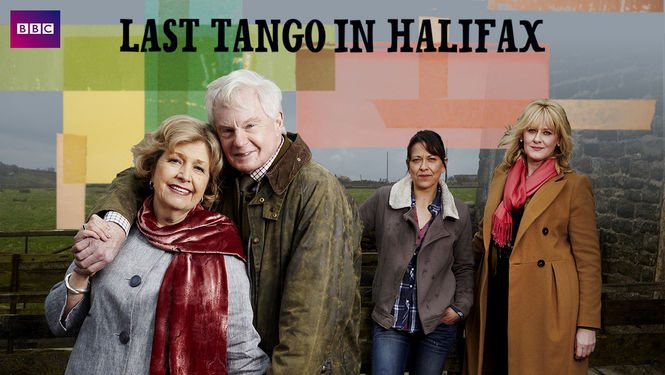 Last Tango in Halifax is television of rare quality.

Last Tango in Halifax is television of rare quality — funny, moving, engaging and utterly charming — so naturally it is British. In it, childhood sweethearts Alan and Celia, both widowed and in their 70s, fall for each other all over again when they are reunited over the Internet after nearly 60 years. As their lives collide for a second time, the couple laments what might have been.

Let me confess from the outset, however, that while I found the first six-episode season priceless and enthralling, I thought Season 2, while still cute, largely descended into soap opera, dealing with the couple’s daughters and their unfortunate amours. Two seasons of Last Tango are available on Netflix and Netflix Instant streaming, and all three seasons are on YouTube. Here is the first episode.

Celia Dawson (Anne Reid) and Alan Buttershaw (Sir Derek Jacobi, BAFTA Best Actor for I, Claudius), both widowed and lonely, are reunited after being persuaded to join Facebook by their respective grandchildren. In the 1950s they were attracted to each other but never expressed their feelings and Celia moved away with her parents. Alan has loved Celia since he was 16 years old, while Celia is “unfulfilled,” having been unhappily married to a man she grew to hate.

After their reunion, Alan and Celia discover that they still feel as passionately for each other as they did when they were teenagers. Their story is described as a testament of the “uplifting power of love at any age.”

Alan and Celia’s romance is depicted alongside the troubles of their grown-up daughters. Alan’s Gillian (Nicola Walker) and Celia’s Caroline (Sarah Lancashire) are complete opposites: widowed Gillian runs a farm and works part-time in a supermarket, and Oxford-educated Caroline is headmistress of a successful school.

Their parents’ engagement alters both daughters’ lives. Gillian wonders how she and her son will cope without her father around to help on their farm, while Caroline, struggling with depression and her feelings for a female colleague, believes her mother’s unconventional romance gives her “permission” to finally admit to being who she really is.

Creator Sally Wainwright was inspired by witnessing the happiness her mother’s second marriage brought her late in life. Her mother Dorothy lost contact with a childhood friend, Alec Walker, when she was 15 but reconnected with him on the website Friends Reunited 60 years later. Within six months they were married. Wainwright described this series as “the most personal thing I’ve ever written.”

Of 1,063 viewers voting at imdb.com, 95.3% gave Last Tango thumbs up, and 33% considered it a perfect 10. It was a hit with all demos, but not surprisingly it did best with females and with non-Americans.

The series finale, airing on December 19, 2012, won its time-slot, achieving an overnight series high of 6.3 million viewers (26.6% of the available audience).

Critical response in the U.S. was largely positive after PBS picked up the series. My friend Mary McNamara of the Los Angeles Times labeled the series as “the best new show of the fall” describing it as “a rapturous mix of absurdly fairy-tale-romance and frantic modern complications, set in the picturesque drear of Yorkshire and brought to life by masterfully shaded performances.” She declared that Reid and Jacobi “are capable of doing more with a startled look or careful smile … than most actors can do in seven pages of dialogue.”

Jacobi enjoyed the chance to play a character completely different from the 133 he had previously limned. He was pleased that the series provided a chance to depict a “love story between two older characters that isn’t patronizing or stereotyped in any way.” [By the way, Jacobi is absolutely brilliant and hilarious, but very different, in PBS’s Vicious, now airing.]

In Season 2, Gillian has a drunken one-night stand with Caroline’s abusive ex, Caroline’s lesbian lover moves into and then exits the house, Alan and Celia marry quietly but then need to repeat it because Gillian is furious about not being invited, her young son’s girlfriend turns up pregnant, etc., etc. etc. Get the picture? It’s like wading through soap suds. A third series of Last Tango has aired in the U.K, but I haven’t seen it yet. It is on YouTube.

In October 2013, news outlets reported that American actress/screenwriter/ producer Diane Keaton had acquired the rights to remake Last Tango in Halifax for American audiences on HBO, but the project was delayed when PBS ran the second series. In 2014, it was announced that the series would be remade for French TV.

Sir Derek Jacobi is one of England’s leading classical actors and has won 15 major awards and 11 other nominations for works including Dead Again, Gosford Park, Little Dorrit, and The King’s Speech. Anne Reid’s 108 film and TV credits include Bleak House, Dinnerladies, A Bit of Fry and Laurie, and Coronation Street.

Nicola Walker’s 40 credits include Four Weddings and a Funeral, Scott & Bailey, MI-5 and Touching Evil. Sarah Lancashire won six awards and earned eight other noms for works including Happy Valley, Seeing Red, and Coronation Street. Sally Wainwright has 14 awards and nominations for six of the 19 series she has created and/or written for, including Happy Valley, At Home With the Braithwaites, Canterbury Tales, and Unforgiven, plus five for Last Tango in Halifax and four for Scott & Bailey.

NOTE: Derek Jacobi and Sir Ian McKellen were magnificently hilarious in the series Vicious which is now airing a second season on PBS and which is also available at YouTube and Netflix. The wonderful Australian series Miss Fisher’s Murder Mysteries now has a third season on Netflix and YouTube.