The Surge Has Worked? Right. 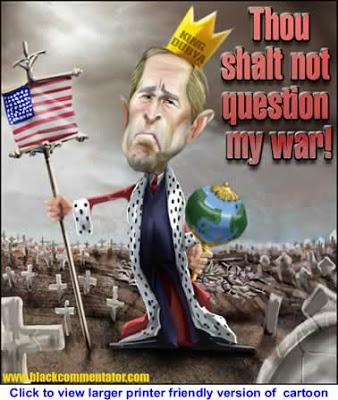 Back in the good old days of the Vietnam War General Westmoreland, Lyndon Johnson and Bob McNamara kept sending more troops into battle, calling it “escalation.” It was a term fraught with negative meaning, but capitalizing on the horrible public relations experience of that war, George Bush has since hired PR experts who have given it a new name, i.e., “surge.” It sounds much better, and despite the horrors of what’s happening in Iraq, Bush and his political clone, John McCain, are chanting the mantra, “the surge is working,” meaning the escalation is working. Sen. McCain has come out for victory and against surrender in Iraq.

What Sen. McCain means by “the surge is working,” is that he sees America as winning the war in Iraq and that we shouldn’t stop what we are doing in order to finalize the victory there. Aside from never explaining what he means by “winning the war” he also hints that American casualties are way down because of the escalation. That chorus is intended to help him win the Presidency this fall.

In January of 2007, when Bush first announced his escalation, U.S. troop levels were at 132,000. By then the government had counted 3044 dead Americans. Iraqi civilian deaths continued to mount.

By March, 2007, U.S. troop strength reached 152,000. On March 27, 2008, Sen. John McCain told CNN’s Wolf Blitzer that “General Petraeus goes out there every day in an unarmed humvee . . .” But he later acknowledged that there is no such thing as an unarmored humvee.

In April, 2007, U.S. troop levels reached 150,000 soldiers, and in June, 2008, the American command acknowledged that they were arming and passing money to Sunni Tribes formerly allied with Al-Qaeda, who, after the money was passed, have promised to fight their former allies alongside their former enemies— the U.S.

In September, 2007, U.S. troop strength reached 168,000, a time when Gen. Petraeus told Congress that the escalation had largely met its military goals. By October of 2007, U.S. military casualties had dropped to levels that were lower than any before it. For example, in October, 37 U.S. soldiers died from combat; in November, 35 died, and in December, 2007, 23 died. From January, 2008, through July, 2008, the U.S. lost 215 American soldiers to combat. That, obviously, is relatively a good thing, compared to the earlier much heavier losses.

No Americans lost would be my preference, which would have been the case had Bush not lied in 2003, and had not invaded Iraq that year.

But what neither McCain nor Bush are adding to the “surge is working” mantra is a series of factors that more accurately explain the drop in casualties, a drop that has little or nothing to do with the escalation. The drop in casualty rates in fact coincided with the near completion of the ethnic cleansing of Sunnis that the Shiite militias had undertaken in Baghdad. In effect, the Sunni minority already had either been killed, or they had fled to other parts of Iraq, or had fled to Syria and to Jordan to save themselves and their families. Syria now has about 1.5 million Iraqis who are refugees from the killing fields in Iraq, and Jordan has about 750,000 of such refugees. (As opposed to less than a thousand Iraqi refugees who have been admitted to the United States).

To simplify the equation, there were very few Sunnis remaining to be killed who were within reach of the Shiite militias.

Adding to this milestone was the outright U.S. bribery of Sunni tribesmen in western Iraq, many of whom once had been allied with Al-Qaeda, and who made up the bulk of the insurgency, but who are now fighting alongside the Americans. The bribing of Sunnis started in 2006 by a fellow named Col. McFarland, and not in 2007 under Petraeus. It continued under Petraeus.

The result of this positive change in strategy has been to drive Al-Qaeda sympathizers into remote corners of Iraq, and away from where U.S. troop strength is concentrated.

While it has fortunately brought down American casualties, bribing these former enemies is itself a danger. No one knows what will happen should someone else come along and offer them more money. The danger is that they may not stay bribed and they may turn on Americans again with the weapons General Petraeus has given them. But hopefully they will stay bribed, and that would also be a good thing. One wishes that General Westmoreland would have thought of that military strategy in Vietnam, provided, that is, only if the Communists were capable of being bribed.

The third factor accounting for the drop in U.S. deaths is the cease-fire called by Moktada Al-Sadr, which has been of great help in saving American lives. One must suppose that the cease fire came about because of the departure of Sunnis from Baghdad—people who were the targets of Al-Sadr’s militia.

Far be it for me to accuse politicians of using wars and casualties to advance themselves politically, but in short, Mr. Bush and Sen. McCain have manufactured the modern myth that escalating troop strength was the correct formula for Iraq, thus giving McCain the words to his song of “Obama was wrong.” In fact, Obama is wrong on a lot of issues, but he was right when he opposed the Iraq War [though he has continued to vote the money to pay for it] and he was not wrong on the escalation.

McCain, however, has tried to turn his deadly mistake of supporting the Iraq War to his advantage by trumpeting that his policy decision has brought down American casualties. But what neither Obama nor McCain are talking about is the 32,000 wounded and maimed Americans, nor do they mention the several hundred thousand Iraqis who have died as a result of Bush’s invasion and who would be alive today had Bush not invaded. It’s as though those dead Iraqis never existed. Supporters of the Iraq war are unable so see the wreckage of Iraqi lives caused by George W. Bush, the former fraternity boy, who has left to someone else the cleaning up of the terrible mess he’s made.

The suffering of the tens of thousands of Iraqis and the killing of hundreds of thousands more is an invisible thing, invisible because of the silence of the mainstream American press as well as the silence of the politicians. That silence, that arrogance, and that refusal to see what has been done to Iraq and to the Middle East allows those people to argue for continuing a debilitating war until we reach some vague “victory,” where someone else suffers, but not them.

James G. Abourezk is a lawyer practicing in South Dakota. He is a former United States senator and the author of two books, Advise and Dissent, and a co-author of Through Different Eyes. Abourezk can be reached at georgepatton@alyajames.net.