The War on Drugs: Humiliating 13-Year-Olds 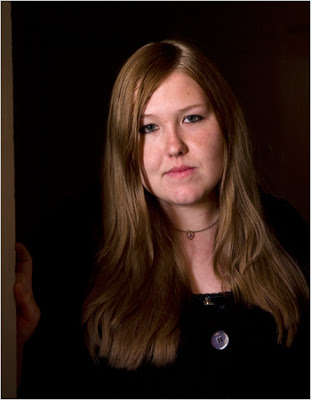 SAFFORD, Ariz. — Savana Redding still remembers the clothes she had on — black stretch pants with butterfly patches and a pink T-shirt — the day school officials here forced her to strip six years ago. She was 13 and in eighth grade.

An assistant principal, enforcing the school’s antidrug policies, suspected her of having brought prescription-strength ibuprofen pills to school. One of the pills is as strong as two Advils.

The search by two female school employees was methodical and humiliating, Ms. Redding said. After she had stripped to her underwear, “they asked me to pull out my bra and move it from side to side,” she said. “They made me open my legs and pull out my underwear.”

Ms. Redding, an honors student, had no pills. But she had a furious mother and a lawyer, and now her case has reached the Supreme Court, which will hear arguments on April 21.

The case will require the justices to consider the thorny question of just how much leeway school officials should have in policing zero-tolerance policies for drugs and violence, and the court is likely to provide important guidance to schools around the nation.

In Ms. Redding’s case, the United States Court of Appeals for the Ninth Circuit, in San Francisco, ruled that school officials had violated the Fourth Amendment’s ban on unreasonable searches. Writing for the majority, Judge Kim McLane Wardlaw said, “It does not require a constitutional scholar to conclude that a nude search of a 13-year-old child is an invasion of constitutional rights.”

“More than that,” Judge Wardlaw added, “it is a violation of any known principle of human dignity.”

Judge Michael Daly Hawkins, dissenting, said the case was in some ways “a close call,” given the “humiliation and degradation” involved. But, Judge Hawkins concluded, “I do not think it was unreasonable for school officials, acting in good faith, to conduct the search in an effort to obviate a potential threat to the health and safety of their students.”

Richard Arum, who teaches sociology and education at New York University, said he would have handled the incident differently. But Professor Arum said the Supreme Court should proceed cautiously.

“Do we really want to encourage cases,” Professor Arum asked, “where students and parents are seeking monetary damages against educators in such school-specific matters where reasonable people can disagree about what is appropriate under the circumstances?”

The Supreme Court’s last major decision on school searches based on individual suspicion — as opposed to systematic drug testing programs — was in 1985, when it allowed school officials to search a student’s purse without a warrant or probable cause as long their suspicions were reasonable. It did not address intimate searches.

In a friend-of-the-court brief in Ms. Redding’s case, the federal government said the search of her was unreasonable because officials had no reason to believe she was “carrying the pills inside her undergarments, attached to her nude body, or anywhere else that a strip search would reveal.”

The government added, though, that the scope of the 1985 case was not well established at the time of the 2003 search, so the assistant principal should not be subject to a lawsuit.

Sitting in her aunt’s house in this bedraggled mining town a two-hour drive northeast of Tucson, Ms. Redding, now 19, described the middle-school cliques and jealousies that she said had led to the search. “There are preppy kids, gothic kids, nerdy types,” she said. “I was in between nerdy and preppy.”

One of her friends since early childhood had moved in another direction. “She started acting weird and wearing black,” Ms. Redding said. “She started being embarrassed by me because I was nerdy.”

When the friend was found with ibuprofen pills, she blamed Ms. Redding, according to court papers.

Kerry Wilson, the assistant principal, ordered the two school employees to search both students. The searches turned up no more pills.

Mr. Wilson declined a request for an interview and referred a reporter to the superintendent of schools, Mark R. Tregaskes. Mr. Tregaskes did not respond to a message left with his assistant.

Lawyers for the school district said in a brief that it was “on the front lines of a decades-long struggle against drug abuse among students.” Abuse of prescription and over-the-counter medications is on the rise among 12- and 13-year-olds, the brief said, citing data from the Office of National Drug Control Policy.

Given that, the school district said, the search was “not excessively intrusive in light of Redding’s age and sex and the nature of her suspected infraction.”

Adam B. Wolf, a lawyer with the American Civil Liberties Union, which represents Ms. Redding, said her experience was “the worst nightmare for any parent.”

“When you send your child off to school every day, you expect them to be in math class or in the choir,” Mr. Wolf said. “You never imagine their being forced to strip naked and expose their genitalia and breasts to their school officials.”

In a sworn statement submitted in the case, Safford Unified School District v. Redding, No. 08-479, Mr. Wilson said he had good reason to suspect Ms. Redding. She and other students had been unusually rowdy at a school dance a couple of months before, and members of the school staff thought they had smelled alcohol. A student also accused Ms. Redding of having served alcohol at a party before the dance, Mr. Wilson said.

Ms. Redding said she had served only soda at the party, adding that her accuser was not there. At the dance, she said, school administrators had confused adolescent rambunctiousness with inebriation. “We’re kids,” she said. “We’re goofy.”

The search was conducted by Peggy Schwallier, the school nurse, and Helen Romero, a secretary. Ms. Redding “never appeared apprehensive or embarrassed,” Ms. Schwallier said in a sworn statement. Ms. Redding said she had kept her head down so the women could not see that she was about to cry.

Ms. Redding said she was never asked if she had pills with her before she was searched. Mr. Wolf, her lawyer, said that was unsurprising.

Ms. Redding did not return to school for months after the search, studying at home. “I never wanted to see the secretary or the nurse ever again,” she said.

In the end, she transferred to another school. The experience left her wary, nervous and distrustful, she said, and she developed stomach ulcers. She is now studying psychology at Eastern Arizona College and hopes to become a counselor.

Ms. Redding said school officials should have taken her background into account before searching her.

The school district does not contest that Ms. Redding had no disciplinary record, but says that is irrelevant.

“Her assertion should not be misread to infer that she never broke school rules,” the district said of Ms. Redding in a brief, “only that she was never caught.”

Ms. Redding grew emotional as she reflected on what she would have done if she had been told as an adult to strip-search a student. Dabbing her eyes with a tissue, she said she would have refused.

“Why would I want to do that to a little girl and ruin her life like that?” Ms. Redding asked.

This entry was posted in RagBlog and tagged Criminal Justice, Drug Laws, War on Drugs. Bookmark the permalink.

4 Responses to The War on Drugs: Humiliating 13-Year-Olds