US Financial Institutions: Corrupt to the Core? 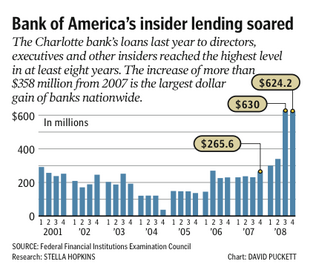 This graphic shows Bank of America’s loans to directors, executives and other insiders since 2001. Graphic by David Puckett, Research by Stella Hopkins.
Secrecy shrouds insider loans
By Stella M.Hopkins / March 23, 2009

Experts see potential conflicts of interest in banks’ $41 billion in insider lending, some during credit crunch and bailout.

Banks nationwide hold $41 billion in loans to directors, top executives and other insiders, a portfolio that experts say should be stripped of secrecy.

Insider lending to directors is particularly troublesome because it could cloud the judgment of people charged with protecting shareholders and overseeing bank management, the experts say.

At Bank of America, those loans more than doubled last year, to $624 million – the biggest dollar jump in the country. The largest of them likely went to three directors or their companies. The surge came during the third quarter as credit markets froze, the government prepared to infuse banks with billions in tax dollars and the board approved the purchase of troubled Merrill Lynch.

Wachovia ended 2008 with $747 million of insider loans, second only to the much larger JPMorgan. All of the loans were held by Wachovia directors or their companies, with just five holding the largest. Last year, the company had to sell itself amid staggering losses in part due to a 2006 deal.

Insider loans, ranging from home mortgages to multi-million-dollar lines of credit for big companies, are legal but largely shrouded from public scrutiny.

Banks don’t have to explain increased insider lending. They don’t have to disclose individual loan amounts or terms for any insiders, including executives. Directors and their businesses, often the largest insider borrowers, are completely shielded. Directors must approve insider loans greater than $500,000, so they sometimes vote on loans for each other or the executives they oversee.

Insider favoritism is against the law. Bankers and regulators say the loans are subject to greater scrutiny to ensure insiders aren’t getting better terms and are creditworthy.

But top corporate governance experts contend that insider lending carries serious potential for conflict of interest among bank officials and must be stripped of secrecy. They argue that lending to directors, the watchdogs of management, must be revealed so shareholders can gauge their independence. And disclosure should be paramount for banks receiving government aid, said Ed Lawrence, a University of Missouri-St. Louis finance professor and co-author of a 1989 study that was a rare look at insider lending.

Seven of the 10 banks with the largest insider loans received a total of more than $50 billion in the banking bailout late last year, according to an Observer analysis of banks’ federal filings.

“It’s good for the public to know…where the money is going,” Lawrence said. “When you start taking public money, we hold them to a much higher standard.”

The majority of the nation’s 8,000-plus banks make insider loans, some very small. At the end of last year, banks had $41billion of insider loans, up 5.7 percent from a year earlier, according to the Observer’s analysis.

Insider loans accounted for less than 2 percent of the banks’ assets, amounts that are generally unlikely to seriously damage banks if the loans go sour. The loans tend to make up a larger percentage of business for smaller banks.

Not all large banks are big insider lenders. Wells Fargo, for example, was about the size of Wachovia before the San Francisco bank swooped up the wounded Charlotte institution late last year. Wells ended last year with $20 million of insider loans, a fraction of Wachovia’s $747 million. Neither bank would discuss the disparity.

Most publicly traded companies were banned from making insider loans in 2002, part of the regulatory rush following the collapse of Enron and other accounting scandals.

But banks were excluded from the ban, partly because they’re in the business of lending and also because the loans have been subject to extensive regulation for more than 25 years.

The loans were blamed for bank problems during the nation’s S&L crisis. Lawrence and others have linked insider lending to bank failures. In December, the chairman of a large Irish bank resigned after revelations he had $109 million of secretive insider loans. In January, the government seized the Dublin bank.

“Studies of bank failures have found that insider abuse, including excessive or poor quality loans made, … is often a contributing factor to the failure,” says the “Insider Activities” handbook from the Comptroller of the Currency, the lead regulator for big national banks.

Banks can be hurt by even the perception of insider favoritism, the guide says.

“We don’t have a difficulty with insider loans when they’re properly written and extended,” said Ray Grace, the N.C. deputy banking commissioner who heads bank supervision for state-chartered firms. “It makes a certain amount of sense that a director or bank officer take that business to their own bank rather than shop it to a competitor.”

A key requirement is that insider loans be on the same terms as those to similar outsiders.

“This is a highly scrutinized area, so usually any problems would be caught early,” said Mindy West, a Federal Deposit Insurance Corp. chief whose job includes crafting instructions for bank examiners.

Large banks, such as Bank of America, have regulatory officials on site. Smaller banks are typically examined every 12 to 18 months. Regulatory officials request insider loan details for review prior to their regular bank examinations, West said. The FDIC has regulatory authority over about 5,100 banks.

New loans and increases in existing loans are especially likely to be scrutinized, West said. And a loan balance that doubled would probably trigger a second look.

Objectivity may be at risk

Longtime governance expert Charles Elson doesn’t advocate banning insider loans, although he was startled the loans can run into hundreds of millions. But, he said, banks need to make full disclosure, revealing names, amounts and terms. He is especially concerned about disclosure for loans to directors and their interests.

“Management, who can dictate the terms of the loan, are being overseen by the director who is a beneficiary,” said Elson, director of the University of Delaware’s Weinberg Center for Corporate Governance. “It compromises the director’s ability to be objective.”

As borrowers, directors might be less rigorous when evaluating the CEO or other executives, he said. They might be unwilling to buck management when approving deals.

Wachovia’s board approved its 2006 acquisition of mortgage lender Golden West Financial, a vote that ultimately helped push the bank near collapse. Shortly before that approval, the bank had $1.47 billion in insider lending. Fifteen borrowers held the largest loans. Banks aren’t required to disclose details of past lending, so there’s no way to identify those borrowers.

At the end of 2008, all of the bank’s $747 million in insider loans was held by directors or their companies, said Julia Bernard, a spokeswoman for Wells Fargo, which bought Wachovia last year. Five borrowers held the largest loans. Bernard said most of the loans were made before 2008.

Wachovia’s former chairman and longtime director, Lanty Smith, did not respond to two calls for comment.

Nell Minow, co-founder of The Corporate Library, said directors should take their business elsewhere if they aren’t comfortable with disclosure.

Thanks to Mike Woods and Mariann Wizard / The Rag Blog