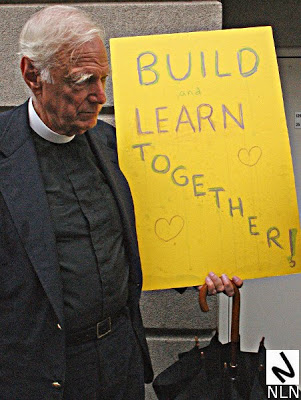 Photo by Bud Korotzer / NLN.
The objectification of Other:
Hatred and healing at Ground Zero

NEW YORK — Sunday was another rainy day in New York City, as two sides of the Ground Zero mosque issue squared off in dueling protests — two sides who are responding to a catastrophe with two mutually exclusive answers: hatred and healing.

If volume validated an argument then the motorcycle contingent bound for Sunday’s anti-mosque protest would win, hands down. With loud pipes and shrill voices, the bikers from out of town who thundered down Broadway en route to the demonstration — apparently going the wrong direction — would have the final word in any debate whose outcome is measured only in decibels.

But it isn’t that simple. And just as the issues surrounding the proposed building of a mosque-slash-community center in the general area of Ground Zero aren’t so simple — it’s too simplistic to write off all of the bikers as stereotypic toughs, incapable of compassion or human emotion

Some of them lost relatives in the September 11, 2001 attack on the Trade Center.

A short time after the loud cavalcade drove past this reporter, several of their number, now dismounted, emerged on a street corner looking confused, vulnerable, and maybe even a little embarrassed. It was hard to deny their humanity. We’ve all been lost before — alone, wandering unfamiliar territory.

To those who see the world from the vantage point of an “us versus them” perspective — there is no middle ground, no room for freedom of religion, no Constitution to defend, no reason to wince at racist epithets hurled at the Other side. To those who embrace an ideology based on interpreting 9/11 as a clash of two cultures, as an apocalyptic harbinger of a holy war — one protester’s angry outburst sums up the world view: “Islam is not a religion, it’s a cult.”

This was the statement one New Yorker hurled at another on Sunday.

And as if this statement was not sufficient to choke off discussion, to demonize and objectify an entire faith, the anti-mosque protester continued: “If you had a Qur’an here, I’d piss on it.”

The objectification of Other as evil incarnate, the demonization of billions of believers, is not a rational construct but it is one that has currency, perhaps because choosing hatred over healing, choosing to adopt bumper sticker slogans over calm dialogue is less threatening, less intimidating than attempting to grasp elusive nuances. There is no doubt that it is easier to hate than to love, to assimilate rather than to accommodate, to shout rather than to listen. This is the sad trajectory of terrorism itself.

The man who uttered that sad statement, who argued that Islam is not a religion, was eventually quieted by a white-shirted NYPD senior officer. The target of the protester’s venom — who had responded angrily — walked off to join the Other demonstration of the day: the group of civil rights activists, peace protesters, and interfaith clerics who support the Muslims looking to build the Cordoba House mosque and community center on 51 Park Place.

From NYC to Oklahoma — and back again

At the anti-Islamophobia rally, Alan Stolzer of the Military Project asked me a question.

“Has anyone built a church near the Oklahoma City bomb site?”

His rhetorical question was pointed: Timothy McVeigh was a blond and blue Christian. A home grown killer. The analogy was not ideal. McVeigh did not profess to kill in the name of his religion. But in our history other Americans have killed in the name of their faith, some acting in concert with other true believers. And yet in these cases, it was the killers who were judged, not the professed faith, not the religion in its entirety. It could not be otherwise. And yet it’s different for Muslims in America.

Somewhere in between the 9/11 ideologues — the Islamophobes and racists who look to burning books as a solution — and the Muslim community left holding a fractured First Amendment are the families of 9/11. Their grief is not ideological in nature but their numbers, their “hearts and minds,” are the perceived prize for those who would market rabid xenophobia disguised as patriotism.

The Sarah Palins and other rank opportunists, none of whom have ever lived in New York, some of whom can’t spell xenophobia — even if they can see it from their back yard — are eager to profit from appeals to hatred and racism. But for those who lost loved ones, healing will have to be accomplished without hate. However this is done, whatever path is chosen, healing involves overcoming hate, not embracing it.

As the rain fell on the protesters who challenge the binary world view, those who want to heal and move beyond Islamophobia and the scourge of racism, as the mainstream media swarmed to get their soundbites from the “pro-mosque protesters” — a man in a priest’s collar quietly held up a sign. It read: “Build and Learn Together.” 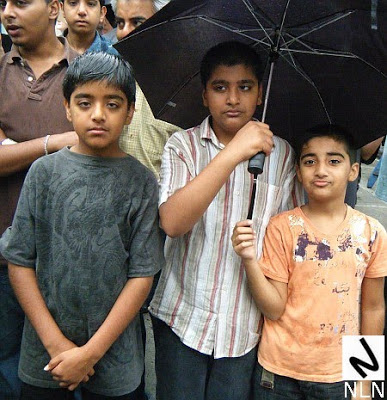 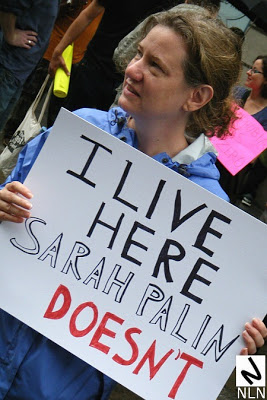 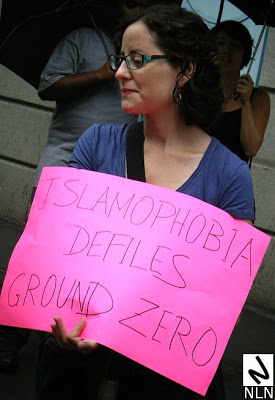 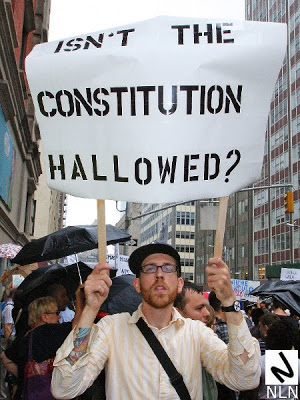 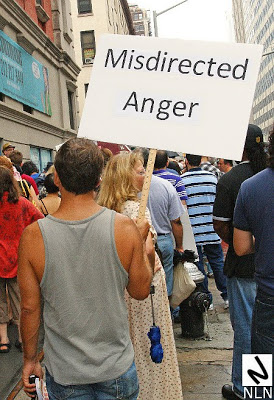 2 Responses to Thomas Good : Hatred and Healing at Ground Zero