Thorne Dreyer :
‘Under the Ground: The Story of Liberation News Service’

Dorothy Dickie has documented a significant and nearly-forgotten chapter of our history. 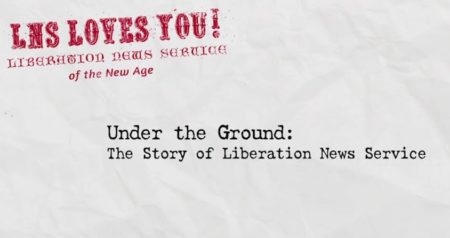 Screenshot from Under the Ground, a documentary by Dorothy Dickie
about Liberation News Service.

AUSTIN — Award-winning Canadian filmmaker Dorothy Dickie is completing production on an exciting 80-minute documentary film called Under the Ground: The Story of Liberation News Service. LNS was an alternative news operation that flourished between 1967 and 1981 in the United States, playing a major – and underrecognized — role in those tumultuous times.

Liberation News Service served underground newspapers, college publications, radio stations — a range of alternative media. They sent out regular packets of news and graphics that provided content otherwise not available to these feisty but often-shoestring alternative publications that sprung up around the anti-war and student power movement and the ‘60s counterculture.

‘It is estimated that the underground papers eventually reached two million readers.’

According to historian and Chicago Seed founder Abe Peck, “The underground press went from five papers in 1966 to literally 1,000 papers by 1970.” It is estimated that they eventually reached two million readers, and most of them carried at least some LNS content. In an essay published by LNS in March 1969, Victoria Smith and I wrote: “In many places, where few radicals exist and journalistic experience is lacking, papers have been made possible primarily because LNS copy has been available to supplement scarce local material.”

Under the Ground begins and ends with clips from Rag Radio – filmed during my November, 9, 2018 interview with populist activist and former Texas Observer editor, Jim Hightower. On the show, Hightower says, “We need an investigative journalism, and we have too little of that. That maverick digging sort of journalism is what matters.” He believes that the Underground Press and LNS “had enormous impact.” Like, “media taking on the Vietnam war, finally.”

I am interviewed in Dickie’s film, as are Austin’s Alice Embree and Jim Retherford. I was a founding editor of The Rag in Austin and Space City! in Houston and was also an editor at LNS in 1968-1969. Alice helped start The Rag and worked with RAT in New York. Jim edited The Spectator in Bloomington, Indiana.

It tells the history of LNS through 30 live interviews and exciting footage.

Under the Ground tells the history of LNS through 30 live interviews with former staffers and other underground (and overground) journalists and activists — and with exciting footage of momentous events including the massive march on the Pentagon in 1967 and the sit-ins and occupation of buildings at Columbia University in 1968, both covered extensively by LNS. 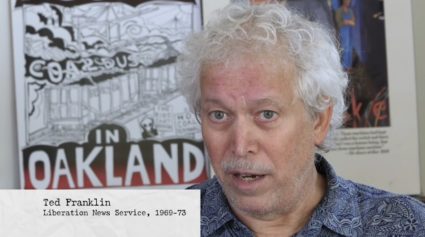 Former LNS staffer Ted Franklin is interviewed in screenshot
from Under the Ground.

According to Abe Peck, “We were the people who went to demonstrations, got hit over the head and the next day read about how we had assaulted the police by running into their billy clubs.” LNS and the underground press believed in “advocacy journalism,” and, as Judy Gumbo Albert points out, “It was okay to write about what you participated in.” The film also includes discussion of the violent repression of many ‘60s underground papers by police, right-wing vigilantes, and the FBI’s COINTELPRO program. Houston’s Space City!, for one, was under prolonged siege from the local Ku Klux Klan.

Women were always an important part of LNS, and in one segment of the movie, staffers talk about the significant – even primary — role that women played in the later days of the group. At that point, the editorial collective consisted of two-thirds women.

The split was highlighted by a daring Sunday morning raid on the New York offices.

The movie’s centerpiece segment covers in great detail the fascinating backstories of LNS founders, Marshall Bloom and Ray Mungo, and the organization’s rocky early history which in 1968 led to a major political, cultural, and personality-fueled schism.

As The Guardian (U.S) reported in a story that was also run by the Los Angeles Free Press, and that featured interviews with me and Bloom:

Accusations of theft, embezzlement and kidnapping are woven into the story behind two separate news packets which the 400-odd subscribers to Liberation News Service are likely to receive this week.

The split was highlighted by a daring Sunday morning raid on the New York offices by a faction led by founders Bloom and Mungo and ally Steve Diamond. The LNS staff had voted to run LNS democratically as a collective, an idea rejected by Bloom and Mungo, who controlled the Board of Directors.

In response, Bloom, Mungo and a handful of others took $12,000 in funds from a benefit film screening and removed the printing press and other LNS equipment to a farm in rural Massachusetts where they intended to set up a competing LNS operation. That, in turn, was followed by a counterraid by representatives of the New York group who were attempting to locate and reclaim the property.

The New York crew was accused of using aggressive tactics and Bloom filed kidnapping charges against a group of 13 people that included George Cavalletto, Sheila Ryan, Dan McCauslin, Victoria Smith, and myself. The charges were lowered to “Breach of the Peace.”

The rural LNS lasted a few months, but the New York operation thrived for many years to come.

Marshall Bloom was a tragic figure: a brilliantly creative but highly eccentric man who reportedly suffered from bipolar disease and, according to Ray Mungo and Allen Young, was a closeted gay man who struggled with his sexuality. Marshall committed suicide in November 1969.

Under the Ground covers these events with riveting eyewitness accounts. 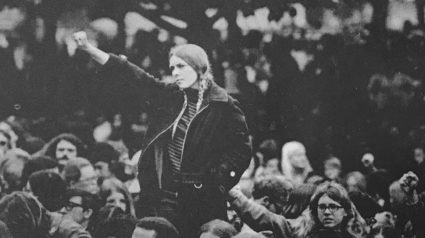 Screenshot from Under the Ground.

‘Organizations like LNS and Truthout are really crucial to the survival of our species.’

Towards the end of the film, there’s an interview with Maya Schenwar, editor of progressive website Truthout, highlighting a discussion about differences and parallels between the ‘60s underground press and today’s social media and progressive blogosphere. Speaking about Truthout, Schenwar says,

Our approach to journalism is that we can’t just be empty vessels through which information travels… We hope our work will both fuel movements and document movements… I see organizations like LNS was, like Truthout is — really crucial to the survival of our species.

Some former staffers spoke to us about the film.

Ted Franklin, who worked at the news service from 1968-’73, saw a cut of the film and believes Under the Ground hits the mark:

Dorothy Dickie has done a great job of bringing to life the heady times in which Liberation News Service became a key source of information and images for underground newspapers across the country. The film captures how our small band of underpaid rebel journalists understood our mission to tell stories that the mainstream media – we called them the “straight press” – were clueless about.

Katya Sabaroff Taylor told us that Under the Ground reflects her own experience with the news service:

Working for LNS felt like having my fingers on the pulse of activist efforts to help end the Vietnam war, racism, and sexism, and to support liberation struggles around the world. But more than that, LNS’ers lived and worked together day in and day out, forming strong bonds that last to this day.

Dorothy Dickie has produced and directed children’s, science, history, cultural, public affairs and documentary programming for broadcasters in Canada and the U.S. for over 20 years. Her work has been recognized with a National Emmy and a Peabody Award. Under the Ground is her first independent feature-length documentary.

Dorothy Dickie is raising funds, including grant money, for completion and distribution of this film. There is a GoFundMe site where people can contribute.

Watch the trailer for Under the Ground.

1 Response to Thorne Dreyer :
‘Under the Ground: The Story of Liberation News Service’