Times are Hard and Tent Cities Are on the Rise 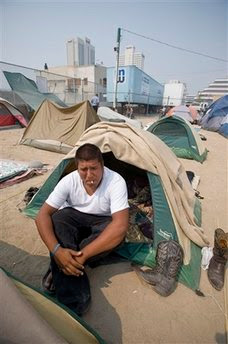 Mack Martinez, 19, of Cedar Rapids, Iowa, smokes in front of his tent at the tent city that sprung up next to the homeless shelter in downtown Reno, Nev., Wednesday, June 25, 2008. Photo by Scott Sady / AP.
‘From Seattle to Athens, Ga., homeless advocacy groups and city agencies are reporting the most visible rise in homeless encampments in a generation’
By Evelyn Nieves / September 18, 2008

A few tents cropped up hard by the railroad tracks, pitched by men left with nowhere to go once the emergency winter shelter closed for the summer.

Then others appeared — people who had lost their jobs to the ailing economy, or newcomers who had moved to Reno for work and discovered no one was hiring.

Within weeks, more than 150 people were living in tents big and small, barely a foot apart in a patch of dirt slated to be a parking lot for a campus of shelters Reno is building for its homeless population. Like many other cities, Reno has found itself with a “tent city” — an encampment of people who had nowhere else to go.

From Seattle to Athens, Ga., homeless advocacy groups and city agencies are reporting the most visible rise in homeless encampments in a generation.

Nearly 61 percent of local and state homeless coalitions say they’ve experienced a rise in homelessness since the foreclosure crisis began in 2007, according to a report by the National Coalition for the Homeless. The group says the problem has worsened since the report’s release in April, with foreclosures mounting, gas and food prices rising and the job market tightening.

“It’s clear that poverty and homelessness have increased,” said Michael Stoops, acting executive director of the coalition. “The economy is in chaos, we’re in an unofficial recession and Americans are worried, from the homeless to the middle class, about their future.”

The phenomenon of encampments has caught advocacy groups somewhat by surprise, largely because of how quickly they have sprung up.

The relatively tony city of Santa Barbara has given over a parking lot to people who sleep in cars and vans. The city of Fresno, Calif., is trying to manage several proliferating tent cities, including an encampment where people have made shelters out of scrap wood. In Portland, Ore., and Seattle, homeless advocacy groups have paired with nonprofits or faith-based groups to manage tent cities as outdoor shelters. Other cities where tent cities have either appeared or expanded include include Chattanooga, Tenn., San Diego, and Columbus, Ohio.

The Department of Housing and Urban Development recently reported a 12 percent drop in homelessness nationally in two years, from about 754,000 in January 2005 to 666,000 in January 2007. But the 2007 numbers omitted people who previously had been considered homeless — such as those staying with relatives or friends or living in campgrounds or motel rooms for more than a week.

In addition, the housing and economic crisis began soon after HUD’s most recent data was compiled.

“The data predates the housing crisis,” said Brian Sullivan, a spokesman for HUD. “From the headlines, it might appear that the report is about yesterday. How is the housing situation affecting homelessness? That’s a great question. We’re still trying to get to that.”

In Seattle, which is experiencing a building boom and an influx of affluent professionals in neighborhoods the working class once owned, homeless encampments have been springing up — in remote places to avoid police sweeps.

Homeless people and their advocates have organized three tent cities at City Hall in recent months to call attention to the homeless and protest the sweeps — acts of militancy, said Harris, “that we really haven’t seen around homeless activism since the early ’90s.”

In Reno, officials decided to let the tent city be because shelters were already filled.

Officials don’t know how many homeless people are in Reno. “But we do know that the soup kitchens are serving hundreds more meals a day and that we have more people who are homeless than we can remember,” said Jodi Royal-Goodwin, the city’s redevelopment agency director.

Those in the tents have to register and are monitored weekly to see what progress they are making in finding jobs or real housing. They are provided times to take showers in the shelter, and told where to go for food and meals.

Sylvia Flynn, 51, came from northern California but lost a job almost immediately and then her apartment.

Since the cheapest motels here charge upward of $200 a week, Flynn ended up at the Reno women’s shelter, which has only 20 beds and a two-week limit on stays.

Out of a dozen people interviewed in the tent city, six had come to Reno from California or elsewhere over the last year, hoping for casino jobs.

“I figured this would be a great place for a job,” said Max Perez, a 19-year-old from Iowa. He couldn’t find one and ended up taking showers at the men’s shelter and sleeping in a pup tent barely big enough to cover his body.

The casinos are actually starting to lay off employees.

“Sometimes I think we need to put out an ad: ‘No, we don’t have any more jobs than you do,'” Royal-Goodwin said.

The city will shut down the tent city as soon as early October because the tents sit on what will be a parking lot for a complex of shelters and services for homeless people. The complex will include a men’s shelter, a women’s shelter, a family shelter and a resource center.

Reno officials aren’t sure whether the construction will eliminate the need for the tent city. The demand, they say, keeps growing.