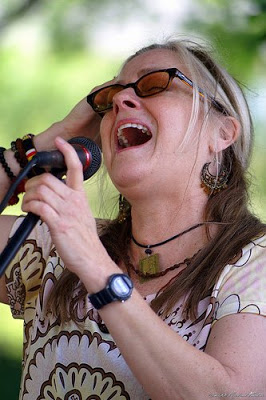 Tina Marsh lived for art, and on Tuesday, June 16, she died for art in her South Austin home surrounded by family and friends. Tina was 55 years young.

A personal reflection on the passing of an extraordinary woman …

I worked with Tina Marsh as graphic designer for the Creative Opportunity Orchestra from the beginning in 1980 for the next dozen years or so. The pay wasn’t good, but the overall artistic rewards were priceless.

Tina’s transcendent musicianship and vocality never failed to astonish me. How could a voice emerging from a place so deep and mysterious belong to a mere mortal? I often could not help but wonder whether — like Sun Ra, another musical explorer who visited and left this planet before her -– she had come from another world, another plane of aural reality.

Tina’s message of peace, love, and community belies a career fraught with struggle, setbacks, and disappointments, both professionally and personally. As I realized after a recent candid conversation with Tina’s longtime friend and collaborator Alex Coke, a dedicated jazz artist in Austin is always about one illness or a couple cancelled gigs from homelessness. Tina’s own hardships seemed to give her musical voice more urgency, more authenticity.

That voice is irreplaceable, but her work and her indomitable spirit can and must prevail.

Heaven has added a shining new voice to the Celestial Choir, and, to honor the occasion, Gabriel is blowing hot triple-tongued riffs blessed by Louis, Dizzy, and Miles while angels arrayed in rainbow raiments dance on ribbons of light. Gene Ramey and Martin Banks sit in beside the Almighty Bandleader, saying “You go, Tina. You go, girl.”

Meanwhile here in Austin and the world, we lost a mostly underappreciated muse, but that’s how it is with our earthbound muses, and the teary-eyed children in and among us will huddle and embrace, humming a Huddie Ledbetter dirge.

Tina Marsh was a jazz adventurer, vocal explorer, orchestra leader and community builder, tireless messenger of harmony and hope. To borrow from one of her far-too-infrequent recordings, a simple pure-voiced rendition of Tosca’s evocative anthem, “Vissi d’arte,” Tina lived for art, and on Tuesday, June 16, she died for art in her South Austin home surrounded by family and friends. Tina was 55 years young.

Marsh was born in Annapolis, MD, in 1954, and arrived in Austin in 1977 after a short-lived East Coast career in musical theatre. Inspired by her friend and mentor, Roscoe Mitchell of the Art Ensemble of Chicago, Tina reached out and embraced the freedom of musical expression called jazz. Inspired by Mitchell’s groundbreaking jazz collective, Chicago’s Association for the Advancement of Creative Musicians (AACM), she then reached out and touched Austin’s struggling jazz community with a bold sense of possibility. In 1980, with co-founder Carl Michel, Marsh launched Austin’s venerable music cooperative of composer-improvisers, the Creative Opportunity Orchestra, and dared to venture into an unknown Texas frontier where avant garde jazz and free-form improvisational music had never stepped before.

When Michel departed for a teaching career in Minnesota after the first season, Marsh, by sheer force of will, kept CO2 moving ahead, writing and securing grants, seeking out and charming local benefactors, scheduling events and venues, coordinating travel and rehearsal schedules for 18-20 musicians (some from as far away as L.A. and NYC), reviewing new scores, composing, performing, teaching, overseeing CO2 community outreach programs to develop an audience for the music, planning promotional and advertising efforts, and all the while raising her two sons, Clay and Diamond Zeke — and for more than a decade battling breast cancer.

Under Marsh’s direction, CO2 also produced model outreach programs for young people throughout Texas. The first, an after-school project at South Austin’s once-struggling Becker Elementary where Marsh was for many years artist-in-education, established classes in percussion, urban dance, simple wind instruments, and more. At the end of the school year, the children, joined by such well-known local musicians and artists as Oliver Rajamani, the late Martin Banks, Nicholas Young, Joel Guzman, and Marsh, staged a gala performance for parents and peers.

More than a decade ago, Marsh used her outreach experience to conceive and produce Circle of Light, an extraordinarily successful multicultural holiday program featuring Austin musicians performing the songs and dances of Christmas, Las Posadas, Hanukkah, Kwanzaa, Diwali, and Ramadan in Austin schools and local venues. For a video feature on the Circle of Light school workshops, click here. For a preview of the film-in-progress about Circle of Light, click here.

Just as the Creative Opportunity Orchestra’s repertoire was not confined to performance, Tina’s creative interests were not confined to the orchestra. She composed, arranged, and performed music for choreographers Deborah Hay, Yacov Sharir and José Luis Bustamante, and her longtime friend Sally Jacques. She has performed and recorded with composer/saxophonist Alex Coke on Alex’s early 1980s gem, “New Visions” (whose album cover I designed), the Leadbelly Legacy Band (1989), the masterful 2002 “New Texas Swing” (featuring a soulful rendering of Leadbelly’s “Go Down Ol’ Hannah”), the powerful 2005 performances and recording of “Iraqnophobia/Wake Up Dead Man” (in collaboration with photographer Alan Pogue), and a recent highly experimental trio called “It’s Possible” (2008).

Marsh was inducted into Texas Music Hall of Fame in 2001 and the Austin Artists Hall of Fame in 2008, but, as noted jazz journalist Howard Mandel understates, “she has received woefully inadequate press attention outside her immediate locale — much less than her music deserves, as it is always warm, penetrating or provocative, and satisfying.”

To call Tina Marsh a musical adventurer is nigh axiomatic. The Austin Chronicle’s Raoul Hernandez once described her as “Billie Holliday meets Diamanda Galas for a drink at the Broken Spoke.” On her MySpace page, Marsh lists Ella Fitzgerald, Sheila Jordan, Yma Sumac, Meredith Monk, and Nancy Wilson as her influences.

Mandel recently called Tina “a pure-voiced vocalist who employs extended techniques in dramatic interpretations of songs… with brilliant control for deep effect but who has also conducted a wild ‘n’ wooly ensemble through open structures to fine result and [has] been described as singing ‘scat to the highest power.’”

Austin American-Statesman writer Brad Buchholtz, in his
excellent tribute on Wednesday, noted that Tina, “as she demonstrated in her treatment of a song such as… Coleman’s ‘Lonely Woman,’ was in equal measure a ‘vocalist’ and ‘singer.'”

“She could scat,” Buchholz wrote, “but her wordless vocal lines were more sophisticated than that. Marsh used her voice as an instrument to convey literal effects — the coo of birds, the flutter of wings — and in other contexts approximate the figurative: turbulence, vastness or longing.”

Tina’s sister, Val, told Buchholz, “I’m no expert. But when I sing and reach a pure note, I feel as close to God as I can get. And I know Tina was doing that all the time. It was like her constant prayer or chant or meditation. But beyond that, she had the genius and capacity to carry an audience with her.”

If there is a heaven, Tina Marsh already is carrying a new audience with her. Gene and Martin are proud.

Tina Marsh’s Memorial Service celebrating her life, will be held this Saturday, June 20, 2009, from 4:30-6:30 p.m. at The One World Theatre, 7701 Bee Cave Rd, Austin, generously donated by proprietors, Nada and Hartt. Tina’s CDs will be available for sale with proceeds going to the family for medical expenses. Donations are welcome as well. The service will be Quaker Style with a designated time for sharing a few words about Tina. There will be a pot luck reception following the ceremony at One World beginning at 6:30. — Donna Menthol

A Tribute to Tina Marsh

Pianist Eddy Hobizal and cellist Terry Muir, the Zeke Zimmerman Band, and past and present participants in Marsh’s Circle of Light project will perform. A suggested donation of $10 will go toward paying Marsh’s medical expenses. Anyone wishing to stay for the 9:15 p .m. performance of “Impermanence,” which is also dedicated to Marsh, may do so for an additional pay-as-you-wish price (suggested $10).

5 Responses to Tina Marsh : Requiem for a Jazz Angel