To Play the VGC Opening for Velvet Underground

This just discovered today, a new Austin e-mag called the Blunderbuss. Randy Kirchhoff is part of the effort, and a fine one it looks to be. Our congratulations to all involved. 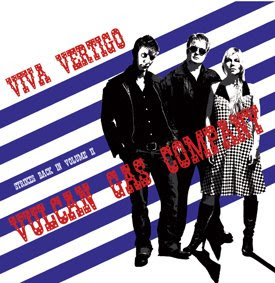 The first time I heard the Copenhagen band Viva Vertigo was pretty stunning. And weird. Not weird in the bad sense but weird in the I am thirteen years old blowing my mind by listening to The Velvet Underground on my headphones weird. In the sense that this is something new, bizarre and captivating.

This record, their second, is titled “Vulcan Gas Company”. It starts out with a clanging symphony of resonating guitars and the exclamation “Finally, it’s here!” In some weird way it reminds me of the intro to the 70’s masterpiece “Maggot Brain” by Funkadelic. The eclectic, sonic party continues with guitar heavy, chunk-a-chunk songs followed by melodic ballads (of sorts) all filled with reverb-rich personality. The last song is a swirl of promises to us that “I will be here ’til the end of the night.” Sounds about right.

I received the disc in the mail from your friend and mine, Don Hyde, founder of The Vulcan. I pulled the disc out of the envelope and noticed the title. Was this a joke? (For those of you who may not know, the Vulcan was a club in downtown Austin, open from 1967 to 1970. Probably the first club that really started freaking out the establishment, paving the way for The Armadillo. But it was so much more than that.) From the first few notes coming from the stereo I realized that this was no joke at all. Not that the record is devoid of humor.

So intrigued was I by this record that I figured an interesting story must be within. Soon, the emails were flying back and forth between myself and founder of Viva Vertigo, Simon Beck. The Blunderbuss reaches out its artist musings across the sea to find that they do know about The Armadillo, The Vulcan, Jim Franklin’s (and others’) posters, and so much more.

Darina Neyret: When did you first hear about the Vulcan Gas Co.?

Simon Beck: I read about the club “The Vulcan Gas Company” on the cover of the green Velvet Underground live album “1969″. Part of the record was recorded there. I think Lou Reed said something about doing one long set “…and pull up your pincushions, or whatever you do to make life palatable here in Texas…” I always imagined a couple of cowboys getting that sentence mid-drink and spitting it out, being upset about witty Lou. Anyways, the name always popped up in my mind. And I finally got to read something about it on the net.

Read all of it here. / The Blunderbuss

This entry was posted in RagBlog and tagged Austin, Music, Sixties. Bookmark the permalink.