Tom Hayden :
BOOKS | A political realignment over climate? A reflection on Naomi Klein

If Klein is half-right, most Democrats may choose climate justice over their irrational ties to corporate and confederate Democrats. 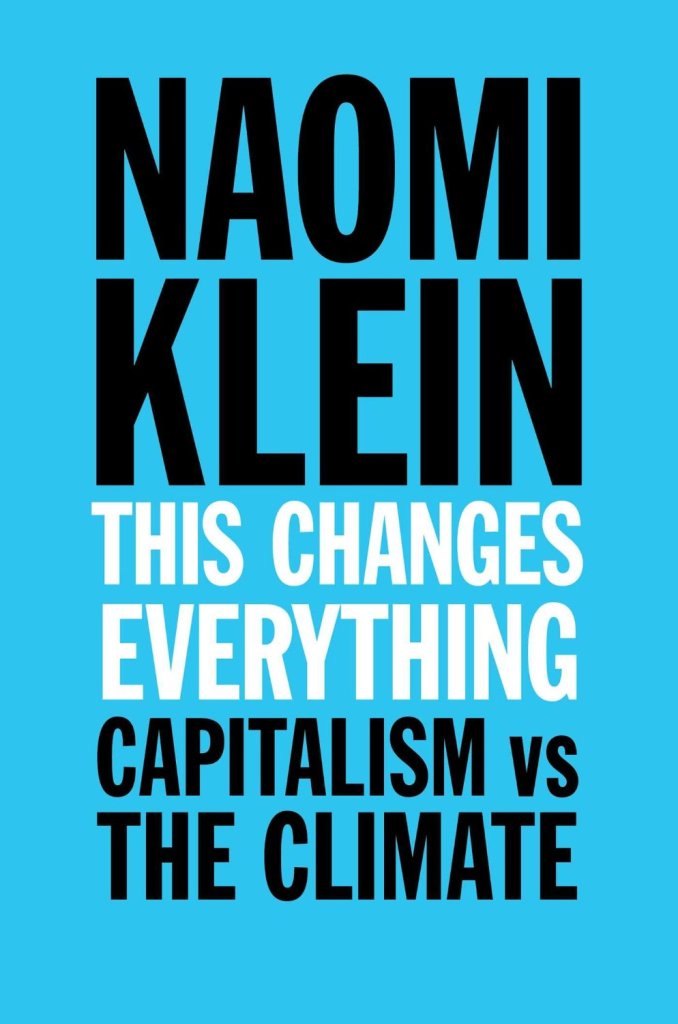 Naomi Klein doesn’t say much about California in her brilliant must-read, This Changes Everything, Capitalism vs. The Climate. Yet California may be the place which indeed “changes everything,” assuming that such a utopian goal is even possible. At the very least California is the laboratory of the solar, renewables, and conservation r/evolution of the last few decades, for better and for worse.

Klein’s main argument is that major environmental groups have sold out to Wall Street, corporate donors, and Democratic Party leaders. She is scathing in her attacks on market-based strategies. She supports a resistance strategy instead, mainly led by native people and youth around the world who are blockading the fossil fuel industry where they can.

The resistance is grouped in what she calls Blockadia, a community whose identity is shaped at the barricades. This same Blockadia, she believes, might well be the unifying thread for the Left’s dream of a progressive society beyond the domination of corporate power. In the end, she hopes for a “Marshall Plan for the Earth” without explaining how that goal can be achieved without passing through the institutions she tends to despise.

Hers is a great antidote to the prevailing approaches of many mainstream environmentalists.

Hers is a great antidote to the prevailing approaches of many mainstream environmentalists and those who believe the crisis can be met with a few adjustments to the prevailing system of capitalism — not minor adjustments, to be sure, but designed to preserve the current system in a cleaner, greener form.

There are two problems with her bold Big Picture. First, there are vast differences between and within the mainstream environmental groups, which she views too monolithically. Without getting into detail, the majority of committed environmental activists have fluid identities which find them one day zip-tied on the ground, another day knocking on doors seeking donations, then bringing court challenges against polluters, and even voting for candidates like Bernie Sanders — an “all of the above” approach which seems internally consistent to most of them.

In addition, there are major differences, often-brutal ones, between different “mainstream” environmental organizations. Lumping them all together as one “Big Green” monopoly results in marginalizing Blockadia from necessary resources of support.

Second, she seems to be arguing that capitalism itself must be changed before the climate crisis abates. That is the plain meaning of her title. But she is too subtle a thinker to go that far. Her own instincts contain an anarchist thread, which is suspicious of the State, seen by socialists as the instrument of social reform or revolution.

She leaves the question open, in favor of a very important formulation that both capitalism and state-sponsored socialism are based on the extraction of natural resources for economic growth. Environmental formulations like “sustainable growth” have been Band-Aids to avoid resolving these contradictions for years. She makes a great contribution to the search for a new theory of political economy.

But what to do about the Green
Billionaire class?

But what to do about the Green Billionaire class, which she correctly says is heavily involved in shaping environmentalism? Should the Sierra Club have rejected the $50 million donated by Billionaire Michael Bloomberg for its campaign to shut down Big Coal? Does the One Percent have any role in solving the climate crisis? Or does the One Percent have to be removed from power first?

It’s a bit like the arguments between socialists and suffragettes decades ago over which should come first, socialism or the vote? In retrospect, it’s hard to believe that serious advocates fought over that question, but today there are many on the Left who place their Left agendas ahead of the climate one. What Klein is arguing is that all ideological positions must be reconstructed to deal with the epic new crisis unfolding. The reconstruction must be spiritual, cultural, political, and economic as well.

Klein is hostile to market approaches like California’s cap-and-trade, a 2006 law which mandates steady greenhouse gas reductions (the cap) and allows polluters to purchase a further right to pollute under the new limit (the trade). Honestly, I am not sure how I would have voted had I been in the California legislature when it passed by the narrowest of margins (on solely Democratic votes plus a signature by Republican Gov. Arnold Schwarzenegger).

One of the most pernicious aspects of cap-and-trade is socio-economic.

One of the most pernicious aspects of cap-and-trade is socio-economic; that is, the law allows a corporation to keep polluting Richmond, California, in exchange for purchasing and preserving one hundred thousand acres of Upper Peninsula woods. Or indigenous people may be displaced from the Lacondon Jungle as part of its being designated as a nature preserve. The debate over that provision still continues.

The fight over AB 32 (Sen. Fran Pavley’s cap-and-trade bill) came down to a basic partisan vote in the legislature. Arnold, which is what we still call him, and the Democrats, wanted the bill. For Arnold, it meant breaking completely with his own party. For the Democrats, it meant giving Arnold a victory in an election year. Rather than create a new bureaucracy, a Climate Action Board, it was agreed to place the program under the Air Resources Board, a powerful government agency.

The ultimate political debate was over whether the cap-and-trade program “shall be” a market mechanism or simply “may” be one. In a compromise, the market approach was left as an option to be carried out by a state agency (the ARB) that had all the characteristics of a so-called “command and control” bureaucracy. A hybrid approach was created through political compromise. Arnold signed the bill into law without a single Republican aye vote. That was the end of him in his party.

AB 32 went into effect in 2012-2013. Cap-and-trade now generates between $2-5 billion in funds to be invested in California clean energy and renewables programs through 2020. That will be as much as $25 billion or more within an overall estimated clean energy budget of $120 billion (the rest comes from existing state funds and a corporate loophole closure.)

AB 32 is now fused with SB 535 (2012), which requires that cap-and-trade funds not only reduce carbon emissions but also provide “co-benefits for impacted and disadvantaged communities.” That formula enables the environmental movement to indeed become a broader progressive movement including economically distressed communities of color and labor.

If cap-and-trade was a sellout to the corporations, one must ask why the fossil fuel lobby seems to hate it so much.

If cap-and-trade was a sellout to the corporations, one must ask why the fossil fuel lobby seems to hate it so much. By an agreement reached in 2006, the oil and gas sector was given five years before coming under the reach of the cap. Last year their top priority was trying to jam an exemption from the cap through the Legislature. The fight went on to the final day of the legislative session before the governor, the ARB, and Senate Democrats, blocked the industry.

Throughout that period they ran television and radio commercials blaming the governor for gasoline price increases that would be coming from cap-and-trade (without acknowledging the reason). They also poured millions into legislative races, and even recruited a sitting Democratic senator to become Chevron’s lobbyist in Sacramento. The fight is unending and complicated.

It’s hard to imagine taking down Finance Capitalism before getting the climate crisis addressed. Should we reject the $74 million spent by billionaire Tom Steyer on environmental candidates and campaigns to block the XL pipeline, even though most of his money was wasted? Should 350.com send back the money they received from the Rockefeller funds to launch their movement to keep fossil fuels in the ground? That would be absurd, and Klein stops short of advocating a rejection of these billionaire offerings. But that’s the interpretation of her book many will take away.

In searching for relevant models to unprecedented crisis before them, Klein and Chris Hayes, among others, have pointed to slavery and abolition, a drama in which the capitalist class was forced to divest from its property holdings in human beings. As advocates of nonviolence, they tend to understate the fact that 620,000 Americans died in the Civil War. Perhaps a great Climate War is inevitable (we already hear stirrings on the Right). But a better model to work from, however imperfect, is that of the 1930s New Deal.

As I have written about this scenario before. The argument can be stated briefly. Before the New Deal, the capitalist class had unfettered power over laboring men and women, a systemic cruelty was inflicted on the elderly and sick, and all was done in the name of a free-market, racist, anti-government ideology.

The Blockadia of that time, the strikes and factory occupations, the growth of left-wing and revolutionary movements — caused a split among the One Percent as to how to respond. The Roosevelt coalition, based on massive popular support, prevailed in reforming the capitalist system. The Left in fact was divided over the New Deal reforms, claiming that FDR sold out to save the capitalist system. That argument, which was reiterated by Howard Zinn and others, went on for decades.

The truth of the matter will never be entirely clear because World War II pump-primed the economy to rescue America from further Depression. Labor unions were empowered. The elderly gained Social Security. Those left out, including African-Americans, built the early civil rights movement on concessions from the New Dealers.

it’s possible that finance capitalists and big corporations will join the battle against climate change to save their own system.

The point is that it’s equally possible that finance capitalists and big corporations will join the battle against climate change to save their own system from destruction. On the other side will be the fossil fuel lobby and the fundamentalist climate deniers running Congress. Tough compromises will have to be hammered out: why should the greenest of corporations be allowed to exploit slave and sweatshop labor? Why should campaign finance reform prevail over the greenest of investors? Why shouldn’t the student and labor movements push for divestment from fossil fuels and re-investment in renewables?

The fact is that all of this, and more, will go on, because we live in a stormy political process where coalitions are inherently contradictory. If Klein is half-right, there may come a new political realignment in which most Democrats choose climate justice over their irrational ties to corporate and confederate Democrats, as happened in the 1960s in response to the civil rights movement.

Klein wants it all, and she surely deserves it. But between socialism and barbarism lies radical reform, the only conceivable path left towards a sustainable planet. Klein at least has rescued the mainstream progressive conversation from its broad assumption of Clinton-era corporate neo-liberalism.

She has harnessed the fight against carbon and methane emissions to the struggle for social justice, and is trying to transform the environmental movement to a broader one based in communities of color, poverty, and unemployment. That’s more than enough for one book, or chapter, on her amazing journey.

1 Response to Tom Hayden :
BOOKS | A political realignment over climate? A reflection on Naomi Klein