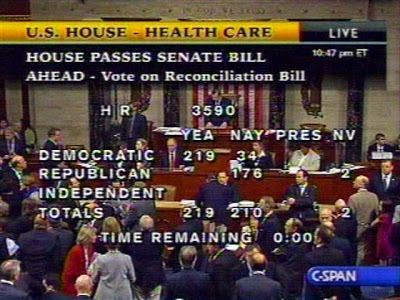 Grab of CSPAN screen. Image from gothamist.
We achieved what was possible:
Health care is victory for progressives

This is not the time for progressives to mourn the defeat of single-payer or the public option, it is the time to cheer the health care victory as an important victory and prepare to stop the right wing in their tracks and discredit their religion of market fundamentalism. It’s the time to push further against that same fundamentalism by demanding such reforms as regulation of Wall Street and a rollback of the Supreme Court decision on campaign finance — all before the November election.

We did not achieve what was politically impossible, Medicare for All. Insurance companies and Big Pharma will benefit from the health care legislation, but the Machiavellians always get their pound of flesh in exchange for conceding reform. We added new health protections for millions of Americans, opened possibilities for further health reforms, and avoided the beginning of the end of the Obama era, which frankly is what the unified right-wing is still trying to bring about.

There is plenty of analysis of how the public came out ahead in this final package despite all its flaws and chicanery. Let me add one fundamental point no one has mentioned:

In his book making the case for the U.S. as a modern Goliath, the conservative political philosopher Michael Mandelbaum wrote of his fear that Sixties social programs will undermine the appetite and resources for empire, which he described as an American “world government.” [MM, The Case for Goliath: How America Acts as the World’s Government for the 21st Century, Public Affairs, 2005]

“Democracy [will] favor butter over guns,” Mandelbaum worried. As programs like health care expand and social security cutbacks are fought, “it will become increasingly difficult for the foreign policy elite to persuade the wider public to support the kinds of policies that, collectively, make up the American role as the world’s government. Foreign policy will be relegated to the back burner,” he groused.

We have no moral right or even competence to be “the world’s government,” of course. The more we invest in our domestic needs — health care, schools and universities, environmental restoration, green jobs — the more unsustainable become trillion-dollar wars in Iraq, Afghanistan, Pakistan, Yemen, and beyond. The seeds of an alternative foreign policy lie in building an alternative domestic one.