Obama is the first president to acknowledge, without quite saying so, that we live in a multipolar world and can no longer dictate our desired outcomes. 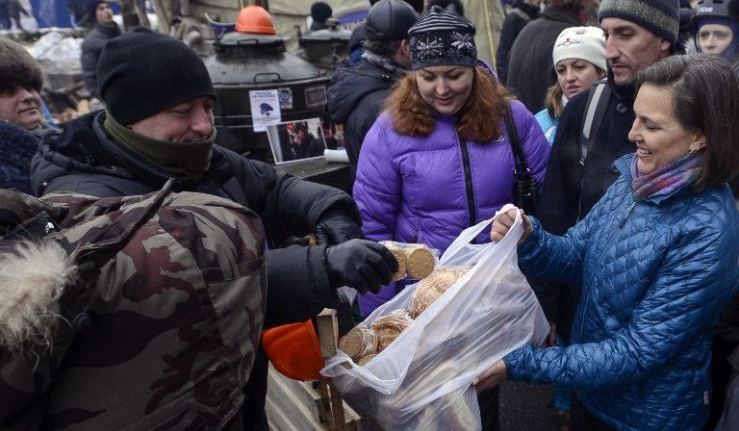 Neocon Assistant Secretary of State Victoria Nuland feeds cookies to protesters in Kiev as she pushes for regime change behind the scenes. Image from Compliance Campaign.

The national security pundits are all over President Barack Obama for apparently failing to preserve American military preeminence in the world. Maureen Dowd complains that he’s “whining,” “disconnected,” “adrift,” and that he should be like the NBA commissioner who, “in his first big encounter with a crazed tyrant, managed to make the job of NBA commissioner seem more powerful than that of the president of the United States.”

What? Though sometimes insightful, Dowd leads the pack in confusing Washington with Hollywood. Her evaluations of “Barry,” as she calls the president, should appear in the entertainment pages. But it’s not only Dowd, the gossip queen. The Sunday New York Times thought it necessary to devote three editorial pages defending him — sort of — from widespread criticism of his leadership. Republicans never cease, for example, to condemn his policy of “leading from behind” on Libya.

Obama’s presidency, however, is not a solo drama with Hamlet the leading character. The president may be the most powerful individual in Washington, but the presidency overall reflects an unstable consensus between divided ideological interest groups in which there is no alternative to Cold War thinking.

The recent comments by Obama that stirred controversy are worth examining: “Why is it that everybody is so eager to use military force after we’ve just gone through a decade of war at enormous cost to our troops and to our budget? And what is it exactly that these critics think would have been accomplished?” That’s hardly treason.

As America stumbles down history’s road I find myself first asking about any proposed policy: is it sane or insane?

My own foreign policy standards have seriously deteriorated from the era of Vietnam. Human rights still matter a great deal to me, but as America stumbles down history’s road I find myself first asking about any proposed policy: is it sane or insane?

That brings me closer to Obama’s query. Wasn’t Vietnam insane, for example? Why did young people of my generation realize that it was nuts while the elders and experts lied to make it happen? Wasn’t Iraq insane? Hasn’t the Cuban embargo been insane for 50 years?

In the absence of any American public opinion hungering for blood, one has to wonder at the sanity of the superpower syndrome driving so many of our policies. For officials drunk on imperial power and high office, merely achieving a sober foreign policy would be a big step forward.

Obama himself is affected with the superpower syndrome, but not entirely. Before he launches a war, often at the behest an adviser, Obama at least tries to evaluate whether the venture is winnable, affordable, and based on serious public support. What the drunken elite thinks is presidential vacillation turns out to be Obama’s sober realism. That three-part test is abhorrent to those who cling to an implicit belief in American exceptionalism, supremacy, or the White Man’s Burden.

It is therefore very important that Obama is the first president to acknowledge, without quite saying so, that we live in a multipolar world and can no longer dictate our desired outcomes anywhere on the planet.

Obama’s realism is different from Rand Paul’s isolationism, which is a more familiar theme in American history.

Obama’s realism is different from Rand Paul’s isolationism, which is a more familiar theme in American history. Obama is more international and his doctrine is different also from the “realist” school of American foreign policy represented by Henry Kissinger, which says it’s legitimate to embrace brutal dictators if our economic or strategic interests require it. Obama knows dictators are overthrown.

Obama famously says he’s only against “dumb wars,” and he just has not found many smart ones.

Obama somehow knows that the balance of opinion has shifted, perhaps for good but at least for now, both at home as well as abroad. Poll after poll depicts most Americans as skeptical or opposed to any new military interventions, including all of our recent ones, unless they are justified as brief, affordable, and based on the narrowest possible definition of “national security.”

He therefore knows that most of our military operations are so questionable that they must be kept secret from the American people, not for security reasons, but for public relations. He understands that Americans overwhelmingly prefer investing in education, health care, and the environment. He knows that he’s vulnerable to the scary charge of being “soft on terrorism,” so he deploys his special forces brutally while publicly promoting the idea that the War on Terrorism must end.

Aside from Representative Barbara Lee (D-CA) and perhaps Senator Rand Paul (R-KY), few in Congress or the media are demanding that his imperial presidency be “reined in.” Obama is on his own.

One must take Obama seriously when he says he wants to, “do some nation-building at home.” It is astonishing but true that those are fighting words within the political culture of an Empire. His domestic efforts —  Obamacare, minimum wage, environmental regulations, opposition to prison overkill, protection of Dreamers, defense of reproductive rights — may never be enough for many progressives, who consider them only token gestures. But what often appears modest on the Left is seen as the end of the world on the Right. Both perceptions could be accurate.

Some Washington conservatives are already hoping that the Russian intervention will put an end to Obama’s cuts in American military spending. The critics imply that Putin gazed into Obama’s eyes, decided the president was weak, and grabbed Crimea. Never would have happened under Mitt Romney, they suggest.

Obama is hammered for failing to “stand up” to the Russians…somewhere, somehow.

Obama is hammered for failing to “stand up” to the Russians…somewhere, somehow. He is berated for not being able to lead Germany and Europe to the brink. What upsets the hawks is that, even after Russia’s aggression and Obama’s cautious response, polls show that only one-quarter of Americans viewed Russia as a U.S. adversary and fully half said it was important that the U.S. not get involved in the conflict between Russia and the Ukraine.

Obama surely knows he cannot face down Moscow militarily, but lacking a credible alternative policy, may be falling back on Cold War rhetoric to placate his critics. Concepts like “detente” are no answer to Russia’s intervention in Crimea. The underlying cause, which is two decades of Western encroachment on Russia’s borders, cannot be acknowledged by the White House since that would be faulted as “blaming America.”

But the American public may be ready for a new narrative based on realism. That new narrative would begin with the understanding that a good life is possible beyond empire.

Such polling data only reinforces the neoconservative fear that “democracy [will] favor butter over guns,” according to Michael Mandelbaum, a scholar who advocates that the U.S. play a “Goliath” role and that the War on Terrorism “provided a replacement for the cold war.”[1]

Obama is aware that the hawks in his own administration, such as neocon Assistant Secretary of State for European and Eurasian Affairs, Victoria Nuland, who conspired to push for regime change in Kiev, and is married to neocon guru, Robert Kagan, took their anti-Russia crusade one step too far.

The hawks, from Senators John McCain (R-AZ) and Lindsay Graham (R-GA), to many others who are within the administration, were drunk on the euphoric illusion that communism was defeated, the Russian army was weak (their favorite diagnosis), and the Russian carcass was ready for the vulture capitalists. Once again, time will prove them to have been crazy. The adjustment to a loss of power seems to cause only repeat behavior.

Wherever Obama has been forced, or forced himself, to intervene militarily, the general results have been folly.

Wherever Obama has been forced, or forced himself, to intervene militarily, the general results have been folly, despite massive media and administration spin to the contrary. Carrying on drone strikes and secret operations in North Africa simply has allowed the “war on terror” to spread. Overthrowing Qaddafi left Libya in violent tribal chaos. The Iraq War left the bloody pro-Iranian Shiite forces on top. The Afghanistan War, pushed by liberals and escalated in 2009 by Obama, has devolved to the flickering embers of its original civil war, with a longtime CIA client about to become president.

Where Obama actually lacked a necessary firmness was in the case of Egypt, where the Israeli and Saudi lobbies seem pleased with installing one of the bloodiest and insane military dictatorships on the planet. Sooner or later, Obama will recognize that he tolerated the replacement of an elected Muslim government in a coup by an extremist military dictatorship.

Obama, following the lead of key senators like Patrick Leahy, will have to decide how to pull back from the crackpot generals in Cairo, without being blamed by Israel, Saudi Arabia, the Republicans, and the media of “losing Egypt.” That’s what warfare gets you in a multipolar world riven by ethnic, religious, and economic fault lines.

Other critical dilemmas lie ahead. If Obama tries to normalize relations with Cuba by 2016, will he be damned for failing to implement regime change? If Obama allows Venezuela to deal with its inner conflicts through politics and diplomacy, will he be accused of failing to bring down the elected Maduro government? Who in the American political and media elite will come to his defense?

What if Obama reaches a modus vivendi with Iran that leaves the Tehran regime in power and allows some supervised level of enriched uranium? Will he be accused of selling out Israel and anti-Semitism, as John Kerry recently was by many on the right? Who will there be to defend diplomacy with the “bad guys”? The next three years may be now or never for Obama’s core agenda. That’s what has so many “America First-ers” worried. They are afraid of “losing America” to forces they can’t understand, much less control.

This article was also published at TomHayden.com and was cross-posted to The Rag Blog by the author.

3 Responses to Tom Hayden :
The conservative fear of ‘losing America’