Public opinion supports Bergdahl but Republicans and neocons are grumbling about his anti-war statements and rumors that he went AWOL. 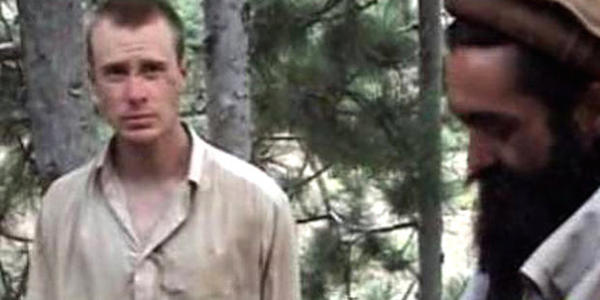 Still from a video released by the Taliban of Sgt. Bowe Bergdahl, held captive since 2009. Image from TomHayden.com.

After the negotiated release of Sgt. Bowe Bergdahl, I called an old friend who spent years as a POW in Vietnam’s prison camps to ask for his response. Preferring to keep his name out of the papers for the moment, he was following the situation closely. In summary though, here’s what he said:

First, the Pentagon will debrief Bergdahl for as long as two weeks, eight hours per day, assuming they follow protocols used in Vietnam.

Second, after debriefing, the Pentagon team will take on crisis management, how to shape and control Bergdahl’s narrative, whether to ignore criticism about his anti-war statements made in captivity or even to blame Bergdahl. “They did the same kind of thing with us.”

Third, “so far, they are not into punishing him.”

Fourth, that is because, “Public opinion so far is solidly behind him,” and therefore, “It won’t help to play that card.” My POW friend thinks most Americans will be supportive of him whatever the facts turn out to be because, “People are sick of the war.”

If the political right “tries anything, people will need to speak out” he added.

Already there is grumbling among Republicans, neoconservatives, and within the armed forces about Bergdahl’s statements, and rumors that he went AWOL. It is likely that Fox News will fan the flames.

Bergdahl could have been released in the same prisoner swap nearly three years ago, but the Republican-led opposition scuttled the deal by opposing “negotiating with terrorists.” See the New York Times account of the suspension of secret talks between the U.S. and the Taliban in March 2012, published December 20, 2012. Those talks held in Paris included U.S. and French officials, a Taliban delegation and Abdullah Abdullah, then a CIA-supported leader of the Northern Alliance, who currently is poised to become Afghanistan’s new president.

According to the December 2012 account, the deal was aborted, “after the Obama administration failed to push through a proposed prisoner swap, which was to be the first of a series of confidence-building measures.” That left Bergdahl stranded alone for another three years.

By early 2014, American officials were outraged to learn that Karzai himself was opening secret talks with the Taliban with the U.S. and NATO excluded. Then Karzai released 72 Taliban, “Accused of having American blood on their hands,” asserting that evidence of their crimes was lacking.

Over strong Pentagon objections, a Karzai commission released 560 other Taliban prisoners in mid-to late 2013. Not only did Karzai wish to curry favor with the Taliban but, “He could punish the United States for what he considered its insincere effort to initiate peace talks,” according to The New York Times.

Bergdahl therefore was a pawn who survived in complete isolation for over three years during political games from Washington to Kabul. Does anyone seriously believe he could have survived captivity if he was in a constant state of rage against his captors? Isn’t it possible he developed a certain level of understanding, even empathy, towards those holding him hostage?

The truth may never come out, or be too complicated for many to fathom, but it should not be politicized to score points.

The truth may never come out, or be too complicated for many to fathom, but it should not be politicized to score points by Republicans who refuse to agree with Obama on anything. Republicans stalled the diplomatic process that could have brought Bergdahl home in 2013, presumably in much better health.

To remember is important. In 1967, for example, I became involved in a release of three American POWs from the jungle camps of South Vietnam. I accompanied the three soldiers straight from their captivity, similar to Bergdahl’s fate, though they were not alone, on planes from Phnom Penh through Lebanon and Paris to New York’s JFK airport.

In those three strange days I got to know the men very well. One of them, Ed Johnson, an Army soldier, was ill with a jungle disease and died a few years later. Another was an African-American Green Beret, James Jackson, who operated on the Ho Chi Minh trail until his capture. He retired into a medical practice and never spoke publicly about his feelings, except on one occasion when he came to Sacramento and he defended me against Republican charges that I was a traitor who should be expelled from the legislature.

The third POW, Daniel Pitzer, soon became an outspoken crusader against communism, the Vietnamese, and all “traitors.” A favorite of the Nixon White House, he even threw out first pitches at major league baseball games.

That strident Pitzer was concealing something he told me on the long trip home. He taught English to his Vietnamese captors, which at the time was a breach of the military code of conduct. His militant anti-communism was related somehow to his fear of being accused of being soft on the Vietcong. I was glad he survived.

I do not know, but I suspect that Vietnam veteran and now Defense Secretary Chuck Hagel helped guide Obama through the currents of spin to arrive at a sound decision in this case. An important precedent has been set, that under certain circumstances the United States should engage in trade-offs with opposing forces.

Only an irrational rigidity, for example, is preventing Obama from organizing an exchange of three imprisoned Cubans.

Only an irrational rigidity, for example, is preventing Obama from organizing an exchange of three imprisoned Cubans, part of the Cuban 5, for Alan Gross, a U.S. AID contractor jailed in Havana for having secretly smuggled communications equipment to groups opposed to the Castro government. The American Right insists that Gross be released unconditionally by the Cubans and rants against any thought of a negotiated outcome. If the Right succeeds in damaging Obama for bringing home Bergdahl, it will make arranging the release of Alan Gross all the more difficult.

However, going forward we have lost over three years. The U.S. never should have started the Afghanistan War and never should have avoided the domestic consequences of talking with the Taliban. Now Obama is promising to end this war (see the White House charts that accompanied his speech), it is vital that the prisoner swap be a springboard for talks with the Taliban about power sharing.

Obama might be able to secure a commitment to prevent what he fears most, a new sanctuary in Afghanistan for attacks against the U.S. The Taliban, who are at least as divided as the U.S.  government, should avoid the fatal mistake of triumphalism, which will lead to civil war and a possible American return via airstrikes, settle for a base in its southern and eastern heartland, internationalize Kabul, and invest in development for the next generation.