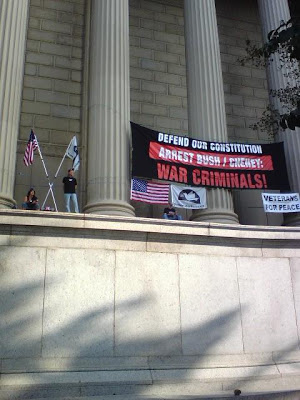 Members of Veterans for Peace occupied the National Archives Building September 23, 2008. Standing on left, by pillar, is Doug Zachary, president of Austin VFP and contributor to The Rag Blog.

Vets for Peace Call for Impeachment

WASHINGTON — Eight hours into their occupation of the National Archives Building in Washington, D.C., Veterans For Peace members report they have called all 40 members of the House Committee on the Judiciary, urging them to actively support impeachment hearings.

Elliott Adams, president of VFP and one of the four veterans perched on a 35-foot ledge in front of the Archives Building, said, “We called the pro-impeachment members of the Committee to give them a shot in the arm and let them know people are still very interested in impeachment hearings, and we called the rest of them to say, ‘Look, the Democratic and Republican conventions are over. Let’s cut the bullshit and get back on track doing your job.'” The veterans plan on maintaining their fast and occupation for 24 hours, until 8:00 am tomorrow.

“Arresting Bush and Cheney for war crimes will honor our oath to the Constitution,” vets say.

On Tuesday morning, September 23, 7:30am, at the front of the National Archives Building on Constitution Ave. in Washington, D.C., five military veterans will risk arrest as they climb a 9-foot retaining fence and occupy a 35-foot high ledge to raise a 22×8 foot banner stating, “DEFEND OUR CONSTITUTION. ARREST BUSH AND CHENEY: WAR CRIMINALS!”

The group, which includes Vietnam and Iraq War veterans, has declared its intention to stay on the ledge, fasting for 24 hours “in remembrance of those who have perished and those still suffering from the crimes of the Bush administration,” according to a written statement. With a portable PA system, they will broadcast recorded statements from prominent Americans for the impeachment and/or arrest of George W. Bush and Richard Cheney. “Citizens Arrest Warrants” will be distributed to people waiting in line to enter the National Archives.

The veterans emphasized they are taking this action because “Bush and Cheney’s serial abuse of the Law of the Land clearly marks them as domestic enemies of the Constitution…they have illegally invaded and occupied Iraq, deliberately destroyed civilian infrastructure, authorized torture, and unlawfully detained prisoners. These actions clearly mark them as war criminals…accountability extends beyond impeachment to prosecution for war crimes even after their terms of office expire.”

“We take this action as a last resort,” their statement added. “For years we have pursued every avenue open to good, vigilant citizens to bring these men to justice, to re-establish the rule of law, and to restore the balance of power described in our Constitution. We are not disturbing the peace; we are attempting to restore the peace. We are not conducting ourselves in a disorderly manner; our action is well-ordered and well-considered. We are not trespassing; we have come to the home of our Constitution to honor our oath to defend it.”

Founded in 1985, VFP has 120 chapters throughout the country and has actively protested the Afghanistan and Iraq wars since their inception. Membership includes men and women veterans of all eras and duty stations spanning the Spanish Civil War, WWII, Korea, Vietnam and Iraq. VFP is an official Non Governmental Organization (NGO) represented at the UN.

Thanks to Bob Meola / The Rag Blog

3 Responses to Veterans For Peace Occupy the National Archives