Wall Street and the Pentagon : Greed and its Delusions 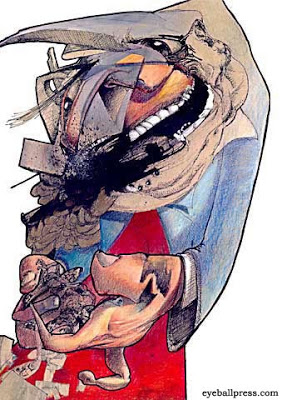 At the heart of both scams is the deliberate corruption of information on such a vast scale that it overwhelms the mind of the educated layman to make sense out of it.

MARMARIS, Turkey — Bill Moyers conducted a fantastic interview with Professor Bill Black, a specialist in securities fraud, on April 3 (Listen to the podcast here and read Moyers’ analysis of this interview in Counterpunch.) I found the interview fascinating, because the scam in the banking industry is so similar to the scam in the Pentagon, only the scale of the fraud perpetrated by the bankers made the milcrats in the Pentagon look like pikers.

At the heart of both scams is the deliberate corruption of information on such a vast scale that it overwhelms the mind of the educated layman to make sense out of it. This of course is no accident. Overloading other people’s minds results in enormous leverage to the faction doing the overloading — whether that faction is made up of the power hungry Apparatchiks in Versailles on the Potomac or the greedy Oligarchs in Versailles on Hudson.

Moreover, the very process of constructing the Potemkin village of misinformation creates a world view that captures the imagination and thinking of its builders. Note how Black hints that some of the scam artists become true believers. Alan Greenspan’s pathetic revelation that his “model” was wrong proves the power of this effect.

Greenspan’s self delusion is very familiar to old line reformers in the Pentagon. We called it incestuous amplification — or the process by which a decision maker’s orientation, or his interior model of how the world operates, distorts his observations of external events to such a extent that he sees and act on what he wants to see, rather than the external world as it is.

When this happens, the whole decision cycle insensibly becomes disconnected from the external environment it purports to cope with, and the inevitable result is confusion, chaos, and in the presence of menace, it can even devolve into panic, which is now clearly evident in the irrational gyrations of the stock market. Add in the insidious effects of criminal greed (among the relatively few rotten apples) and of self interest (which affects everyone), and incestuous amplification becomes a recipe for a catastrophe on a humongous scale — whether it takes the form of a failure to find weapons of mass destruction in Iraq, a meltdown of the Pentagon’s modernization program, a Wall Street meltdown, or even a national meltdown.

The really scary thing about this kind of behavior is the self-organizing character of the evolving catastrophe, or what I call the anatomy of decline. It evolves more from the bottom up via a process of trial and error than from a top-down conspiratorial design. The morally bankrupt oligarchs on Wall Street did not design their corrupt financial structure from the git go; they evolved it over time through little corruptions or adaptations in an interplay of chance and necessity — lobbying here, creating an instrument there, cleaning out a regulator, constructing new bonus formulae, and so on.

Consequently undoing the intricate web of relations, like those now shaping the collective behavior in the Pentagon or on Wall Street, is the real challenge of reform. Boyd’s work on the OODA loop is really insightful with regard to understanding and attacking this problem (but I must acknowledge that in the end, the reformers led by Boyd failed to reform the Pentagon).

Moreover, if information were free, the information industry would not be a two-edged sword, where the increasing power to manipulate vast amounts of “information” with computers (and increase the complexity of information to mind-numbing levels) also makes fraud, self-delusion, and disequilibrium easier, not harder. I found this systematic corruption of information to be central to the chaos and corruption in the Pentagon, and although I do not know him, I think Bill Black would agree that it is also the case on Wall Street.

This entry was posted in Rag Bloggers and tagged Corruption, Pentagon, Wall Street. Bookmark the permalink.

2 Responses to Wall Street and the Pentagon : Greed and its Delusions