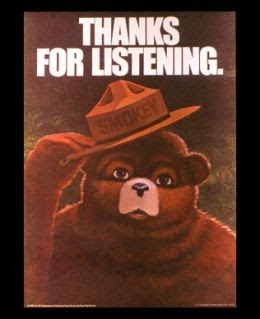 The Ballad of the Panhandler and Smokey the Bear: Remembering When the Government was at Least Approachable
By Dave Lindorff / August 27, 2008

We’ve come a long way towards imperial government in the US—towards a view of the relationship between the federal government, and especially the administration, and the citizenry that has more of a ruler-subjects than a democratic feel to it.

Now I know it is easy to gloss over the way things were, and since I spent a few days in federal prison for protesting the Indochina War at the Pentagon in 1967, after being beaten by federal marshals for doing nothing more than exercising my constitional right to protest on public ground, I am well aware that 40 years ago we were also often treated like serfs. But that said, there was something different back then—a sense that you could deal with powerful officials as an equal.

Back in the summer of 1968, I spent one of several summers on the road (something more young people should do today). I had hitch-hiked across the country from Connecticut to Washington state with Allen Baker, a college buddy, and then, towards the end of that summer break, had bought an old pick-up truck for $100, which we were driving home via the West Coast and the central route. Not having much cash, we were stopping at cities along the way, where I would play guitar for gas money.

This was the late ‘60s, and there was a major and sometimes violent culture war underway between the long-hairs like me and the clean-cut American “Silent Majority,” and my travel companion, Allen, and I were concerned that it would be tough scaring up much cash in the vast Republican stretches of desert, mountains and prairie that lay between Nevada and Missouri. So when we passed through Yosemite National Park, we decided to spend a day in the valley’s main parking lot, raising donations from tourists.

While Allen dozed in the back of the truck, I opened my guitar case and put up the “Gas Money” sign, and then, sitting on the running board of the old Dodge, started to play.

The money poured in—over a hundred dollars in a fairly short amount of time. It was really astounding. People walking by really enjoyed the music and wanted to help us out.

Then a park ranger, an older fellow with a friendly smile, drove up. “I’m sorry,” he said apologetically, “but I have been told to arrest you.”

“What for?” I asked, genuinely shocked.

“There’s no panhandling allowed in the park,” he responded.

“What’s panhandling?” I asked him, genuinely unaware of the meaning of the term, which I, an Easterner, thought must have to do with cooking with a skittle on an open fire.

By that point, Allen had woken up and sat up in the truck bed, rubbing his eyes.

“You’ll have to come in too,” the ranger told him.

We followed him back to the ranger station, where he proceeded to write up our tickets. I noticed that there were two actual jail cells in the station. Thankfully, at least we weren’t going to be locked up. Then there was a loud bang outside. Suddenly, a younger ranger, looking like a recent Marine veteran, muscled and crewcut, ran in. “Where’s the first aid kit,” he yelled. “ I was just bringing in a kid on a marijuana charge and he tried to run. I shot him in the leg.”

Whoa! I thought. This is Dodge City!

The older ranger told his partner where to get the kit, and then turned his attention back to us. “Here are your tickets,” he said. “And don’t skip out on them. This is a federal offense, and the FBI will come after you if you don’t pay it.”

We left the building, and only then did I look at my ticket closely. The fine: $500! It was a fortune back then. Even today it is a big whopper—especially as a penalty for being poor.

I was pretty upset. That was about how much I had earned towards college that whole summer.

Well, the $100 I’d earned panhandling in the park got us back across the country, at least.

When I got home to Connecticut, though, my fine was rankling. Angry at the injustice of it all, I typed up a letter to the Secretary of the Interior, who at the time was Stewart Udall. I wrote about the shooting incident, saying that I thought it was an outrage that an unarmed young man arrested on a minor charge like marijuana possession would be shot in a national park, and I also wrote that it was unfair to fine someone $500 for simply playing music in a park parking lot. “I wasn’t bothering people,” I wrote. “In fact, they were coming up to me to hear the music, and the $100 they tossed into my guitar case is testimony to the fact that they liked what I was doing. That isn’t panhandling, and in any case, it’s pretty nasty to fine someone $500 when he’s doing something because he needs money.”

About two weeks later, I got my letter back from the Department of Interior. On it, in red ink, Udall himself had written, “I agree. Forget your ticket. It’s been taken care of. Stewart Udall.”

I have tried to imagine that same situation happening today. First of all, the unfortunate hippie who got shot that time long ago would probably have been killed, because the ranger would have been carrying a more high-powered weapon, and wouldn’t have even been aiming to disable. Second, Allen and I would probably have been put on some database at the Pentagon, the FBI and the Transportation Security Administration, and would have been barred from flying or entering any national parks. More importantly, though, I tried to imagine the response I would have gotten writing to current Interior Secretary Dirk Kempthorne to complain about an arrest for panhandling. Or to his predecessor, Gale Norton. This is, after all, a department that has instructed its rangers at the Grand Canyon and other parks not to talk about evolution, and those at the Everglades National Park not to talk about global warming and the inevitability that rising ocean levels will swallow that sea-level park in this generation. Under both secretaries, the Interior Department has played a key role in the Bush administration’s efforts to alter and to selectively censor government scientific reports on evidence of climate change.

I’m not saying it was all sweetness and light back in the ‘60s, or even that Stu Udall was representative of all government officials in the Johnson years, but there clearly was a different sense back then that ordinary citizens had a right to communicate directly with their leaders and to expect some kind of response.

Nixon began the end of all that, with his Imperial Presidency. It wasn’t just his penchant for secrecy, though that was legendary. It was his desire to make the government something more remote and feared, something imposing and awesome, rather than down-to- earth and accessible. President Carter, to his credit, went a long way towards reversing that trend, but over the years it has continued, with Bush and Cheney taking it to an extreme. Today the White House is a bunker. Federal police carry assault weapons. Snipers man the roof of the White House. People who write letters of complaint to minor federal officials can end up being strip-searched and arrested.

And from the looks of things, it may not be much better even if Obama takes over the White House. The first day of the Democratic Convention in Denver saw anti-war protesters penned into the same kinds of “free-speech zones” that the Bush/Cheney administration has made into standard features of any “public” appearance they put in, while AT&T, the company that brought us the convention, kept even credentialed reporters away from a private party the company threw for those Democrats in Congress who obligingly passed immunity legislation to protect the company from lawsuits by those whose communications were spied on by Bush’s National Security Agency. (Obama supported the immunity legislation.)

So even as we are all being reduced to a nation of panhandlers, it may be a long time before we can expect a handwritten letter from the secretary of the Interior Department for help in getting off an unfair ticket.

[DAVE LINDORFF is a Philadelphia-based journalist and columnist. His latest book is “The Case for Impeachment” (St. Martin’s Press, 2006). His work is available at www.thiscantbehappening.net]