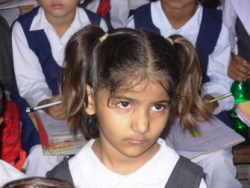 In some parts of Pakistan, the marriage of young girls still takes place depite laws banning the practice. Photo: Kamila Hyat/IRIN
PAKISTAN: Buried alive in the name of tradition
September 1, 2008

QUETTA — Several weeks ago armed tribesmen in Balochistan forced five women out of their village, shot and injured them, and buried them alive in the scrub.

According to the Hong Kong-based Asian Human Rights Commission (AHRC), the five were from the village of Babakot, about 80km from Usta Mohammad, the main city of Jaffarabad District, Balochistan Province.

Three of the women were teenagers. The other two were their mothers. The AHRC said wild animals had left the bodies half eaten.

They were killed because the girls had attempted to make their own choice in marriage, a right legally available in Pakistan to every adult, male or female.

“There is nothing in law that can prevent a woman over 18 making her own decision regarding marriage. That has been decided by the Supreme Court, and there is no ambiguity about this. But still, today, women continue to be killed in the name of the ‘honour’ of their families for making such decisions,” said Naila Hassan, a Quetta-based lawyer.

According to the Lahore-based non-governmental organisation (NGO) Aurat Foundation, 90 women were killed in so-called “honour” killings in the first three months of 2008. The same NGO said that in 2007 over 400 such deaths occurred in Sindh Province alone.

The independent Human Rights Commission of Pakistan said there were 636 “honour” killings in 2007. Its secretary-general, I. A. Rehman, said: “The number could be higher as many cases go unreported.”

The gruesome murders in Balochistan have focused attention on crimes committed against women in the name of “tradition”. Yasmin Bibi, a senator, raised the matter in parliament, arguing that “our religion gives a right to women to wed freely.” An attempt by another senator, from Balochistan, to defend the murders as “tribal custom” provoked outrage. 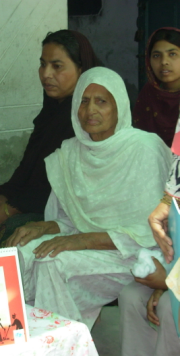 Tradition continues to detrmine the life – and death – of women of all ages in Pakistan. Photo: Kamila Hyat/IRIN

“This is just unacceptable. It is one of the paramount functions of democratic institutions to get rid of these outrageous Stone Age practices and ensure the rights, life and property of citizens as guaranteed by the constitution,” Iqbal Haider, a leading human rights activist, told IRIN.

The government has ordered an investigation.

Women fall victim to violence and abuse on a daily basis. The Aurat Foundation has reported 1,321 cases of violence against women in the first three months of 2008.

Apart from “honour” killings – in which women are killed because they are perceived to have injured the “honour” of their families by choosing to marry someone of their choice, or by engaging in behaviour deemed “illicit” – such violence takes the form of customs in which women may be handed over to rival groups to settle a feud. Such traditions are known as ‘swara’ or ‘vani’.

Child marriages, in which girls as young as eight or 10 may be wed, are also not unknown.

“We need someone to come forward and make an effort to change these traditions. Though laws exist, they are ineffective. We keep hearing of more and more `honour’ killings while feudal and tribal leaders defend such practices,” Gulnar Tabussum, coordinator of the Women’s Action Forum, an NGO campaigning for women’s rights, told IRIN.

Shot on suspicion of having an affair

Crimes committed in the name of tradition take place almost daily. This week, near the town of Sukkur in Sindh Province, a woman was allegedly shot dead by her husband as she slept. Apparently, the husband said, he suspected her of extra-marital relations.

The killing of women – and often the man they are suspected of having relations with – is known as ‘karo-kari’, or ‘black woman, black man’, in the parts of Sindh, Punjab and Balochistan where it is most often practiced.

The fear of tradition is a powerful influence on the lives of women. “I never let my daughter, who is 17, leave the house alone or walk home from her college on her own. If she even accidentally exchanges a glance with a man she faces being labelled ‘immoral’. This, in our society, could mean death for her, said Rabea Bibi, 45, as she waited outside the gates of a Quetta college to escort her daughter home.

This entry was posted in RagBlog and tagged Islam, Pakistan, Women. Bookmark the permalink.