Women Know When They’re Being Hit On 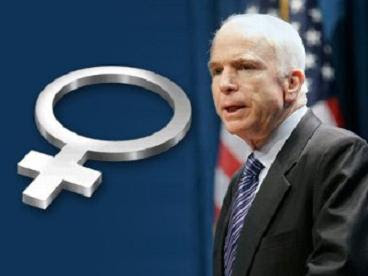 Ten years ago John McCain had to apologize for regaling a Republican audience with a crude sexual joke about Hillary and Chelsea Clinton and Janet Reno. Last year he had to explain why he didn’t so much as flinch when a supporter asked him on camera, “How do we beat the bitch?” But these days Mr. McCain just loves the women.

In his televised address on Barack Obama’s victory night of June 3, he dismissed Mr. Obama in a single patronizing line but devoted four fulsome sentences to praising Mrs. Clinton for “inspiring millions of women.” The McCain Web site is showcasing a new blogger who crooned of the “genuine affection” for Mrs. Clinton “here at McCain HQ” after she lost. One of the few visible women in the McCain campaign hierarchy, Carly Fiorina, has declared herself “enormously proud” of Mrs. Clinton and is barnstorming to win over Democratic women to her guy’s cause.

How heartwarming. You’d never guess that Mr. McCain is a fierce foe of abortion rights or that he voted to terminate the federal family-planning program that provides breast-cancer screenings. You’d never know that his new campaign blogger, recruited from The Weekly Standard, had shown his genuine affection for Mrs. Clinton earlier this year by portraying her as a liar and whiner and by piling on with a locker-room jeer after she’d been called a monster. “Tell us something we don’t know,” he wrote.

But while the McCain campaign apparently believes that women are easy marks for its latent feminist cross-dressing, a reality check suggests that most women can instantly identify any man who’s hitting on them for selfish ends. New polls show Mr. Obama opening up a huge lead among female voters — beating Mr. McCain by 13 percentage points in the Gallup and Rasmussen polls and by 19 points in the latest Wall Street Journal-NBC News survey.

The real question is how Mr. McCain and his press enablers could seriously assert that he will pick up disaffected female voters in the aftermath of the brutal Obama-Clinton nomination battle. Even among Democrats, Mr. Obama lost only the oldest female voters to Mrs. Clinton.

But as we know from our Groundhog Days of 2008, a fictional campaign narrative, once set in the concrete of Beltway bloviation, must be recited incessantly, especially on cable television, no matter what facts stand in the way. Only an earthquake — the Iowa results, for instance — could shatter such previously immutable story lines as the Clinton campaign’s invincibility and the innate hostility of white voters to a black candidate.

Our new bogus narrative rose from the ashes of Mrs. Clinton’s concession to Mr. Obama, amid the raucous debate over what role misogyny played in her defeat. A few female Clinton supporters — or so they identified themselves — appeared on YouTube and Fox News to say they were so infuriated by sexism that they would vote for Mr. McCain.

Now, there’s no question that men played a big role in Mrs. Clinton’s narrow loss, starting with Barack Obama, Bill Clinton and Mark Penn. And the evidence of misogyny in the press and elsewhere is irrefutable, even if it was not the determinative factor in the race. But the notion that all female Clinton supporters became “angry white women” once their candidate lost — to the hysterical extreme where even lifelong Democrats would desert their own party en masse — is itself a sexist stereotype. That’s why some of the same talking heads and Republican operatives who gleefully insulted Mrs. Clinton are now peddling this fable on such flimsy anecdotal evidence.

The fictional scenario of mobs of crazed women defecting to Mr. McCain is just one subplot of the master narrative that has consumed our politics for months. The larger plot has it that the Democratic Party is hopelessly divided, and that only a ticket containing Mrs. Clinton in either slot could retain the loyalty of white male bowlers and other constituencies who tended to prefer her to Mr. Obama in the primaries.

This is reality turned upside down. It’s the Democrats who are largely united and the Republicans who are at one another’s throats.

Yet the myth of Democratic disarray is so pervasive that when “NBC Nightly News” and The Wall Street Journal presented their new poll results last week (Obama, 47 percent; McCain, 41 percent) they ignored their own survey’s findings to stick to the clichéd script. Both news organizations (and NBC’s sibling, MSNBC) dwelled darkly on Mr. Obama’s “problems with two key groups” (as NBC put it): white men, where he is behind 20 percentage points to Mr. McCain, and white suburban women, where he is behind 6 points.

Since that poll gives Mr. Obama not just a 19-point lead among all women but also a 7-point lead among white women, a 6-point deficit in one sliver of the female pie is hardly a heart-stopper. Nor is Mr. Obama’s showing among white men shocking news. No Democratic presidential candidate, including Bill Clinton, has won a majority of that declining demographic since 1964. Mr. Kerry lost white men by 25 points, and Mr. Gore did by 24 points (even as he won the popular vote).

“NBC Nightly News” was so focused on these supposedly devastating Obama shortfalls that there was no mention that the Democrat beat Mr. McCain (and outperformed Mr. Kerry) in every other group that had been in doubt: independents, Catholics, blue-collar workers and Hispanics. Indeed, the evidence that pro-Clinton Hispanics are flocking to Mr. McCain is as nonexistent as the evidence of a female stampede. Mr. Obama swamps Mr. McCain by 62 percent to 28 percent — a disastrous G.O.P. setback, given that President Bush took 44 percent of the Hispanic vote in 2004, according to exit polls. No wonder the McCain campaign no longer lists its candidate’s home state of Arizona as safe this fall.

There are many ways that Mr. Obama can lose this election. But his 6-percentage-point lead in the Journal-NBC poll is higher than Mr. Bush’s biggest lead (4 points) over Mr. Kerry at any point in that same poll in 2004. So far, despite all the chatter to the contrary, Mr. Obama is not only holding on to Mrs. Clinton’s Democratic constituencies but expanding others (like African-Americans). The same cannot be said of Mr. McCain and the G.O.P. base.

That story is minimized or ignored in part because an unshakable McCain fan club lingers in some press quarters and in part because it’s an embarrassing refutation of the Democrats-in-meltdown narrative that so many have invested in. Understating the splintering of the Republican base also keeps hope alive for a tight race. As the Clinton-Obama marathon proved conclusively, a photo finish is essential to the dramatic and Nielsen imperatives of 24/7 television coverage.

The conservative hostility toward McCain heralded by the early attacks of Rush Limbaugh, Ann Coulter and James Dobson is proliferating. Bay Buchanan, the party activist who endorsed Mitt Romney, wrote this month that Mr. McCain is “incapable of energizing his party, brings no new people to the polls” and “has a personality that is best kept under wraps.” When Mr. McCain ditched the preachers John Hagee and Rod Parsley after learning that their endorsements antagonized Catholics, Muslims and Jews, he ended up getting a whole new flock of evangelical Christians furious at him too.

The revolt is not limited to the usual cranky right-wing suspects. The antiwar acolytes of Ron Paul are planning a large rally for convention week in Minneapolis. The conservative legal scholar Douglas Kmiec has endorsed Mr. Obama, as have both the economic adviser to Newt Gingrich’s “Contract With America,” Lawrence Hunter, and the neocon historian Francis Fukuyama. Rupert Murdoch is publicly flirting with the Democrat as well. Even Dick Cheney emerged from his bunker this month to gratuitously dismiss Mr. McCain’s gas-tax holiday proposal as “a false notion” before the National Press Club.

These are not anomalies. Last week The Hill reported that at least 14 Republican members of Congress have refused to endorse or publicly support Mr. McCain. Congressional Quarterly found that of the 62,800 donors who maxed out to Mr. Bush’s campaign in 2004, only about 5,000 (some 8 percent) have contributed to his putative successor.

It was just this toxic stew of inadequate fund-raising and hostility from the base — along with incompetent management — that capsized the McCain campaign last summer. Now the management, at least, is said to be new and improved, but the press is still so distracted by the “divided Democrats” it has yet to uncover how that brilliant McCain team spent weeks choreographing the candidate’s slapstick collision with a green backdrop and self-immolating speech in prime time two weeks ago.

The only figure in the McCain camp who has candidly acknowledged any glitches is his mother, the marvelous 96-year-old Roberta McCain. Back in January she said that she didn’t think her son had any support in the G.O.P. base and that those voters would only take him if “holding their nose.”

The ludicrous idea that votes from Clinton supporters would somehow make up for McCain defectors is merely the latest fairy tale brought to you by those same Washington soothsayers who said Fred Thompson was the man to beat and that young people don’t turn up to vote.