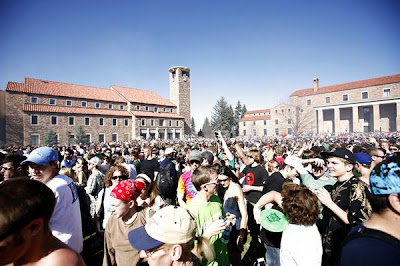 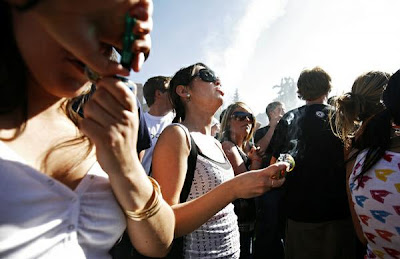 Students pack Norlin Quad on the University of Colorado campus to smoke marijuana and celebrate “4-20” on April 20, 2008. Every year, students gather to smoke, despite past attempts by police to control the crowds. Photo By Kasia Broussalian.
CU’s 4/20 pot smoke-out draws crowd of 10,000
Police issue zero tickets during annual marijuana celebration
By Vanessa Miller / April 20, 2008

A crowd of about 10,000 people collectively began counting down on the University of Colorado’s Norlin Quadrangle just before 4:20 p.m. Sunday.

Yet the massive puff of pot smoke that hovers over CU’s Boulder campus every April 20 — the date of an annual, internationally recognized celebration of marijuana — began rising over the sea of heads earlier than normal this year.

“Oh forget it,” one student said, aborting the countdown to 4:20 p.m. and lighting his pipe early. He closed his eyes, taking a deep, long drag.

Although it’s become an annual and renowned event at CU, this year’s 4/20 celebration was different in some ways than in many previous years: The crowd was so large it migrated from the long-traditional site of Farrand Field to the larger Norlin Quad; festivities kicked off earlier than normal with daytime concerts; and CU police handed out zero citations.

“At this point, none are anticipated,” said CU police Cmdr. Brad Wiesley.

Officers in the past have gone to great lengths to catch people in the illegal act of smoking pot on 4/20.

In 2006, CU police dispatched undercover photographers to snap pictures of smokers. Photos of 150 alleged offenders then were posted on the department’s Web site, and witnesses were offered $50 to positively identify the suspects — who then were ticketed. Another year, smokers on Farrand were doused with sprinklers.

“We can’t do the same thing year after year,” Wiesley said hours before Sunday’s smoking began. “So I doubt we’ll do anything like the pictures. … There’s no way our 12 to 15 officers are going to be able to deal with a crowd of 10,000. We just can’t do strong enforcement when we’re outnumbered 700 or 800 to one.”

About 15 CU officers and a half-dozen deputies with the Boulder County Sheriff’s Office had a presence Sunday among the mass of pot smokers, who bounced giant balls and tossed Frisbees through the haze. CU police did handle four medical-related calls for health issues including dehydration; two people were taken to Boulder Community Hospital.

Closer to downtown, a more “adult” 4/20 gathering also took place at Boulder’s Central Park for non-students looking to avoid the CU foot traffic. But that event had a much smaller turnout and was mostly uneventful.

The crowd size at last year’s CU gathering was rumored to have topped 5,000, Wiesley said, meaning this year’s gathering drew about double.

“I guess it’s not like they had to cut a 4 p.m. class to go do it,” Wiesley said, speculating as to why so many more people showed up. “People are not all that busy at 4:20 p.m. in the afternoon on a Sunday.”

From the steps of Norlin Library, some of the thousands present said the turnout appeared comparable to that of a peace march or protest.

“You guys need to go stand on those stairs,” one girl shouted to her friends, who were seated in a circle on the quadrangle grass. “You don’t even understand.”

That, of course, after they sparked the weed they had come to smoke.

CU freshman Emily Benson, 19, of Kansas City, said she thinks the decriminalization of marijuana will become a hot topic in the upcoming political season and said she felt part of something bigger than just a smoke-out on Sunday.

“We’re at the starting point of a movement,” she said. “This is a big part of the reason I applied here — for the weed atmosphere.”

Although CU junior Max Lichtenstein, 21, isn’t into marijuana or smoking, he also felt Sunday’s event was a chance to do something “bigger” than himself. He passed out 126 Rice Krispies treats with messages attached asking that they act out against the injustices in Darfur.

CU senior Tyler Molvig, 24, said that rather than condemning the smoke-out, CU and the city should embrace it as a money-making opportunity.

“I mean, it’s gonna happen regardless,” he said.

“Peanut butter and jelly!” he screamed to passers-by who were parched and eager to satisfy their munchies. “I’m doing very well.”

One woman was hopeful Betz’s treats were charged with some special ingredients.

“Are these magical?” she asked, only to be disappointed. “Why aren’t you selling magical ones? I mean, it’s cool — but c’mon.”

Source. / Daily Camera
Thanks to Roger Baker / The Rag Blog