A Compendium of Leftist Children’s Literature 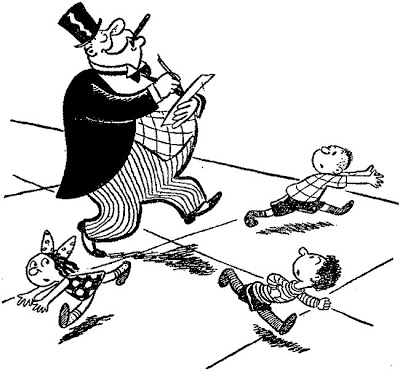 Financial behemoths have been nationalized. The government is promising to spend liberally to combat recession. There are even rumors of universal health care. Socialism is on the march! As we leave capitalism behind, the traditionalists among you may be wondering: Will they come for our children?

Too late. As Julia L. Mickenberg and Philip Nel document in Tales for Little Rebels: A Collection of Radical Children’s Literature (New York University, $32.95), Marxist principles have been dripping steadily into the minds of American youth for more than a century. This isn’t altogether surprising. After all, most parents want their children to be far left in their early years — to share toys, to eschew the torture of siblings, to leave a clean environment behind them, to refrain from causing the extinction of the dog, to rise above coveting and hoarding, and to view the blandishments of corporate America through a lens of harsh skepticism. But fewer parents wish for their children to carry all these virtues into adulthood. It is one thing to convince your child that no individual owns the sandbox and that it is better for all children that it is so. It is another to hope that when he grows up he will donate the family home to a workers’ collective.

Mickenberg, an associate professor of American studies at the University of Texas, Austin, and Nel, a professor of English at Kansas State University, have nonetheless found 44 texts that attempt to attach children to social justice permanently. As they note in an introduction, the tentacles of the left reach deep. Crockett Johnson, creator of the innocuous-seeming “Harold and the Purple Crayon,” was an editor at The New Masses, a Communist weekly. Syd Hoff, known for “Danny and the Dinosaur,” wrote for The Daily Worker. Environmentalism is more or less explicit in such crowd pleasers as “The Lorax” by Dr. Seuss. In fact, so permeated is children’s literature by progressive ideals that Mickenberg and Nel were forced to narrow their scope by focusing on texts that have fallen out of print. They group their rediscoveries according to such themes as economics, unionization and respect for individual difference.

A less ideological reader might be tempted to divvy them up into the categories Charming, Insufferable and Inappropriate. Let’s get Charming out of the way first. In 1939, under the pseudonym “A. Redfield,” Hoff wrote and illustrated “Mr. His,” a book about a portly capitalist with a top hat, a tuxedo and a droopy mustache — like the Monopoly man but more personable. Though elsewhere Mickenberg and Nel warn against trafficking in “the stereotype of the fat capitalist,” they’re lenient with Hoff, perhaps because the rotundity of Mr. His is so charismatic. Mr. His owns a whole town, Histown, where he lives in luxury and the workers in squalor. He gets away with it because “there were no strikes in Histown — and no picket lines and no unions. The newspapers, which Mr. His owned too, said that these things were wicked.” Since this is a children’s story, the workers manage to defy Mr. His despite the false consciousness foisted on them by his mass media, whereupon he temporizes by trying to foment race hatred: “Wuxtry!” he exclaims, hawking issues of his newspaper in person. “Blondes — your real enemy is brunettes!” Unable to resist a villain who shouts “Wuxtry!” I wandered off to the Internet to try to buy a copy of “Mr. His” for my niece. None were for sale. By their reprinting, Mickenberg and Nel have rescued Mr. His from near-complete oblivion.

It is not their only success. In “The Story of Your Coat” (1946), Clara Hollos elaborates an idea from “Das Kapital” by tracing a coat from its origins on the backs of Australian sheep through a unionized textile mill and into a department store. The writing is simple but not simplified; it reminds me of the casual but illuminating way V. S. Pritchett explains the leather trade in his memoir “A Cab at the Door.” In Yehoshua Kaminski’s tale “A Little Hen Goes to Brownsville” (1937), translated from the Yiddish, a chicken sets out to use her near-superhero-caliber egg-laying skills to help the Brooklyn neighborhood’s babies, which she hears are “small and pale, thin and weak.” So unstoppable is her nutritional charity that she lays an egg in Times Square, gets arrested, pays her fine with another egg, and then pays her bus fare with yet an­other. The moral, Mickenberg and Nel infer, is that “justice is best served by a system that is not defined by the strict and inflexible administration of a legal code.” Also, that children should not go hungry.

It’s harder to say exactly what’s politically radical about Lydia Gibson’s “Teacup Whale” (1934), in which a boy finds in a puddle a tiny whale, which his mother persistently mistakes for a polliwog, and which in time must be carted to the wharf in a truck. Does the whale represent the proletariat? Is the boy the opposite of Captain Ahab? The story is, in any case, pleasant to read, and the illustrations are lovely.

As much cannot be said of the Insufferable. I hasten to say there are a lot of stinkers in children’s literature, and I suspect capitalism is responsible for more of them than socialism is. The real culprit isn’t political economics; it’s morality. There seems to be a slightly higher propensity for self-consciously virtuous books to be written by people whose personalities have been paved over by their superegos. In Oscar Saul and Lou Lantz’s insipid “Revolt of the Beavers” (1936), for example, a rebel beaver explains his campaign to a couple of 9-year-olds thusly: “All the beavers were very sad . . . and me too, so I said why don’t you make a club for sad beavers to become glad. So all the beavers say Yayy!” Language so insipid risks turning a sensitive 9-year-old to a life of orthodoxy if not reaction. When I was a child, I felt guilty that I was never able to read more than a few pages of a beautiful edition of Carl Sandburg’s “Rootabaga Stories” (1922), given to my sister and me by our parents. But Mickenberg and Nel reprint a story from the book’s 1923 sequel, and I am at last set free. I didn’t read the stories because no child could — they are stomach-churningly, almost incomprehensibly saccharine. Here, for example, is how Sandburg describes the cost of an episode of militarism: “And the thousand golden ice tongs the sooners gave the boomers, and the thousand silver wheelbarrows the boomers gave the sooners, both with hearts and hands carved on the handles, they were long ago broken up in one of the early wars deciding pigs must be painted both pink and green with both checks and stripes.”

Last but not least among Mickenberg and Nel’s selections are the Inappropriate. For all their caution about the fatness of capitalists, no warning is given that Julius Lester’s “High John the Conqueror” (1969), a retelling of several African-­American folk tales, deploys the N-word with gusto. Another stumper is a 1954 retelling and reillustration by Walt Kelly, of “Pogo” fame, of an episode from Lewis Carroll’s novel “Alice’s Adventures in Wonderland.” The King of Hearts is drawn as a burly, sinister cat with the face of Senator Joseph McCarthy. To show that the McCarthy cat is evil, Kelly gives its eyes no pupils. It has a 5 o’clock shadow, and there’s hair — fur? — on the backs of its hands. The effect is grotesque, of a feline Tony Soprano brutalizing and carnalizing Carroll’s delicate surrealism. I imagine it would give children nightmares. As might the verses of Ned Donn’s 1934 “Pioneer Mother Goose”: “This bloated Pig masters Wall Street, / This little Pig owns your home; / This war-crazed Pig had your brother killed. . . .”

But you can’t make an omelet without laying a few eggs, as any hen can tell you. And in the next few years, as America backs cautiously away from its laissez-faire disasters and reluctantly into an unfamiliar, communal style of politics, some of us may find ourselves wishing we had been scared with such rhymes in kindergarten instead of having had to live through them as adults.

[Caleb Crain has written for n+1, The New Yorker and The London Review of Books.]

This entry was posted in RagBlog and tagged American Society, Literature, Socialism, The Left. Bookmark the permalink.

2 Responses to A Compendium of Leftist Children’s Literature