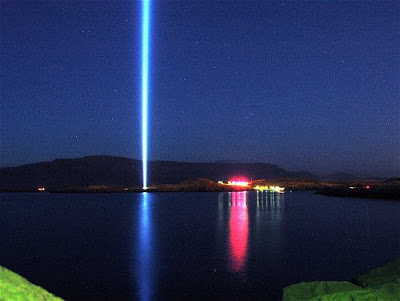 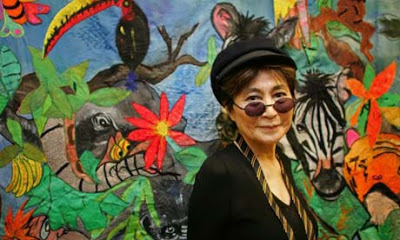 John Lennon was shot 28 years ago this month, but his widow, now 75, travels the world preaching peace and love in his name – and in her art. Here she tells Miranda Sawyer about begging for food as a child in wartime Japan, her two husbands before John, and the daughter who was hidden from her for more than 20 years.

Notoriously, John Lennon once described Yoko Ono as “the world’s most famous unknown artist: everyone knows her name, but no one knows what she actually does”. This is still true today. How do you think Yoko spends her time? Lying in bed for peace? Yowling in recording studios? Rubbing her hands as she counts her millions?

Well, on 9 October, Yoko was in Reykjavik, Iceland. She had a packed agenda. First, she was presenting the LennonOno Grant for Peace. This year, its $100,000 was split between Iceland, for its work on geothermal energy, and Dr Vandana Shiva, an environmental activist. Second, Yoko was switching on her Imagine Peace Tower at Reykjavik harbour, which sends a laser beam shining into the air between 9 October (Lennon’s birthday) and 8 December (the date of his death). Third, she was the VIP guest at the launch of an Icelandic postage stamp in honour of Lennon.

Though I couldn’t get my head around this strange collection of occasions – I kept asking the PR: “Yes, but why Iceland?’ – they seemed representative of Yoko’s work, which moves fluidly between peace, art and her late husband’s memory (not so much music these days; she says she doesn’t have the time). So a trip was arranged and we all convened in Reykjavik. Then, overnight, Iceland went bust.

Suddenly, Yoko’s events seemed irrelevant, if not insulting – a foreign artist donating thousands of dollars for peace when the economy of the entire country has just disappeared. For a start, how could Iceland cash the cheque? In the end, Yoko, a tiny figure dressed entirely in black, including cap and sunglasses, made a well-received, if hippy-flavoured, speech: “We are here today to celebrate the unveiling of the true human spirit, which we have been hiding for such a time of need.”

She then sat gamely through interviews with earnest local journalists asking whether Iceland had a special place in John’s heart: “Well, he didn’t make it here when he was living but now he is coming here in a different way, he is here in spirit. He doesn’t go everywhere, you know!”

In the evening, there was a ceremony for the lighting of Yoko’s Imagine Peace Tower. A memorial to Lennon, it has “Imagine Peace” in various languages engraved around the base and was lit for the first time in 2007 when Yoko and others, including Ringo Starr and Olivia Harrison, all stood around the light as it illuminated. I’ve seen a DVD; it looked amazing, if cold. “Could you put it up in the Caribbean next time?” jokes Ringo.

This year, a storm prevented anyone getting to the island where the light is sited, so Yoko’s entourage and Icelandic dignitaries gathered in the top-floor bar of our hotel to witness the Peace Tower lighting. The event lacked a certain drama. Instead of huddling beneath the elements, sea crashing on the rocks below, we stood around, ate nibbles and drank wine. There was a three-two-one moment and Yoko pressed a button. Nothing. Yoko said: “Why isn’t it working?” And then a column of light began to shine into the dark sky.

Sean Lennon, Yoko’s son, was there with his girlfriend. His birthday is 9 October, same as his dad, so every year his celebrations are overshadowed. Peering through the window, Sean said: “Mom, it’s beautiful, fantastic. Really amazing.” Some of Yoko’s team had tears in their eyes. Not me. I squinted at the pale, distant light and thought: what is all the fuss about?

Well, indeed. It’s amazing how much controversy Yoko causes, when her presence is so low key. As I watch her in Iceland, and later in London, I’m struck by her lack of look-at-me ego and her concern for the feelings of those around her. She’s almost motherly, though this is combined with a cool solo exterior. When she speaks, still with a strong Japanese accent, she begins every sentence with a little “hmm”, a short thinking breath.

The fuss about Yoko, of course, lies in her last marriage (it’s often forgotten that Lennon was her third husband.) She will never be forgiven for marrying the best Beatle and then not disappearing demurely into the background. Although, in a way, she did. In public appearances with Lennon, Yoko was ever-present but, somehow, not there; whispering opinions into his ear, rarely speaking out loud, shaping his work while appearing to contribute very little.

Think of the Imagine video. Yoko sits there, impassive, as Lennon plays and sings one of the most cherished songs ever written. At the end, she offers nothing more than a besotted smile. Even now, 28 years after his death, there’s still fuss, at the moment caused by Philip Norman’s excellent Lennon biography. Yoko agreed to be interviewed for it but has rejected the finished article. No one is quite sure why. When I ask her about the book, she responds with a firm: “No comment.”

We meet again in her vast suite at London’s Mandarin Oriental Hotel. By this time, I’ve been to Iceland, also to Liverpool to see the art she’s showing at the Biennial, and to London, to her keynote speech at Frieze Art Fair. Yoko is happy about this: “You’ve seen everything, you were there!” she exclaims. She is wearing a zip-up top with BERLIN on the front, black trousers and bluey-green spectacles disguised as shades. It seems impossible that she’s 75; she looks 20 years younger. We perch on the vast, flowered sofa and go through the catalogue for her new show at the Baltic Centre in Newcastle. It’s a retrospective, showcasing her art from as far back as the 60s, when Yoko was considered a semi-detached part of the wildly avant-garde Fluxus group (there’s a Fluxus exhibition on another floor).

I’m a fan of much of her art, particularly the bossy, conceptual stuff where she commands the viewer to perform, or imagine performing, an impossible action. Such as: “Stay in a room for a month. Do not speak. Do not see. Whisper at the end of the month.”

First things first, though. It’s been bugging me. Why Iceland? What has that got to do with John? Why have a memorial there, as opposed to Liverpool or New York? “To me, the concept of distance is not important,” says Yoko. “Distance doesn’t exist, in fact, and neither does time. Vibrations from love or music can be felt everywhere, at all times. A memorial to John can just as well exist in Iceland as in New York. And the LennonOno Grant for Peace is designed to be public. It’s important for the world to know about geothermal energy. I give money to other causes, but, for instance, with a refuge for battered women, if you give the money, it’s better not to have publicity because then people think, oh, Yoko’s paying – they don’t need support. But with this, it’s important for these people to be acknowledged.”

We talk about two pieces of her work that appear to be her current favourites. One is Wish Tree, a project that has been going since the 1990s in various exhibition venues: you take a paper tag, write a wish on it and hang it off the branches of a bush (provided). And the other is OnoChord, where Yoko hands out torches to an audience and encourages everyone to flash them at each other once, then twice, then three times. This is Yoko semaphore for I Love You. I don’t like either work much; they seem trite, babyish.

When Yoko appeared at Frieze, everyone was waiting for her old, radical performance pieces, such as Cut, where members of the crowd scissor away her clothes until she is naked. She performed one – about political prisoners – and then played a video which showed the Imagine Peace Tower, Wish Tree and crowds merrily flashing “I love you” at each other. It was too sentimental for the audience, who didn’t join in.

“At Frieze they expected some cool art,” says Yoko. “They were a cool crowd. But I thought: why not edit it all down into two essential parts? Love and peace. Afterwards, I was wondering if I was right. But only art and music have the power to bring peace.”

Hang on. Even if every person in the audience at Frieze says “I love you” to each other, or “Imagine peace”, why will that make any difference? They’re not the ones who start wars. “If everybody thinks of something, then it will happen. Your mind is part of the universe. It is connected, you can use its energy. And politicians want people to like them, it’s important to them. They think: why don’t they like me? They will act if their people tell them to.”

Perhaps I’m just a cynical hack, but I’m not sure that flashing I Love You at Robert Mugabe would get you very far if you were wearing an MDC T-shirt. However, it becomes easier to understand Yoko’s obsession with love and peace when you look at the conflict in her younger life. Born on 18 February 1933 in Tokyo, she was the eldest child from the union of two important Japanese families. Isoko, her mother, was a Yasuda, founders of a merchant bank. The Onos were highly educated aristocrats who married into business, eventually running the Bank of Tokyo. Both Yoko’s mother and father Yeisuke were excited by the arts and Yoko was trained in lieder singing, Italian opera and classical piano. “But it was complicated; my father wanted me to learn music but also not to learn it. His mind was conflicted – he didn’t want me to rebel.”

Because of her father’s work, the family moved between Japan and the US, settling back in Tokyo in 1941 when he was transferred to Hanoi in Vietnam. During the Second World War, he was sent to a concentration camp in Saigon; the rest of the family stayed in Tokyo until the fire-bombing of 9 March 1945. Afterwards, Isoko moved the children to the countryside. Yoko remembers this as a difficult time, when she had to grow up. Her mother – “not like a typical housewife, she was quick with her words, sarcastic” – had bought them a small house, but did not come with her children. Instead, she sent the only family servant not called up to work in the factories, an older woman, both physically and mentally handicapped.

The 12-year-old Yoko was forced to take control. She had to beg for food. “I had a big responsibility, to look after my brother and sister and also the help, to make sure they could eat. The country people did not like city people. They said: you think you are above us and called me bata kusai, which means ‘smelling like butter’. Like I was an American.”

After the war, Yoko finished school and was the first female student accepted on the philosophy course at Gakushuin University. Her family ended up in New York where Yoko studied poetry and composition, eventually rebelling against her parents to become part of a loose salon of local creatives, including John Cage. She married composer Toshi Ichiyanagi in 1956. “He was orthodox, conservative. We were very good friends but very different.” She’s still on civil terms with Toshi – he and Sean recently met in New York – but after their relationship ended, Yoko checked herself into a sanatorium, “like a Betty Ford”.

Read all of this article here at CubaNow