A Little Succession History from an Expert 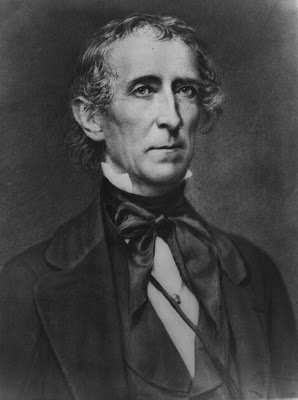 John Tyler, the first US Vice President who succeeded to the Presidency in 1841
The Sarah Palin selection: Why McCain’s inexperienced running mate falls short of meeting the implicit constitutional qualifications for vice presidents
By John W. Dean / September 5, 2008

In truth, the Vice President of the United States is important for only one reason: He or she will become President of the United States upon the death, incapacity or resignation of the President. Nine times in our history, vice presidents have succeeded to the presidency: John Tyler (1841), Millard Fillmore (1850), Andrew Johnson (1865), Chester A. Arthur (1881), Theodore Roosevelt (1901), Calvin Coolidge (1923), Harry Truman (1945), Lyndon Johnson (1963), and Gerald Ford (1974). Of course, the vice president also has a significant secondary role: It is he or she, acting with a majority of the Cabinet, who can declare the president incapable of carrying out the duties of the office, and then take charge – until the action is either ratified or rejected by a majority of the Congress. So far in our history, however, this has never occurred.

Given the fact that the 2008 GOP standard-bearer John McCain is seventy-two years of age, his selection of an inexperienced Vice Presidential running mate, Alaska Governor Sarah Palin, has again focused attention on the process and procedures for selecting vice presidents – or, to put it more bluntly, the utter lack of process or procedures in selecting the person who is a heartbeat away from the presidency. McCain, not unlike others before him, selected a less than fully vetted running mate for political reasons. That is surely a concern for voters to think over in the upcoming election – but it raises a systemic concern, too, for the long run.

Consider this parallel: Does anyone believe that if John McCain were president and had selected Governor Sarah Palin under the Twenty-fifty Amendment to fill a vacancy in the vice presidency, Congress would have confirmed her? Not likely. In fact, it is even less likely that McCain would have even attempted to do so, for he would have embarrassed himself.

While the Constitution does not expressly set forth qualifications for the vice-presidency, it strongly implies them — and Palin falls short.

How Our Constitutional Process for Selecting Vice Presidents Evolved

Our founders gave little thought to the vice presidential selection process. Initially, the candidate who placed second in Electoral College votes became vice president. While this worked for the first three presidential elections, the election of 1800 produced a tie in the Electoral College, between Thomas Jefferson and Aaron Burr (both of the same party), and although Burr was the announced candidate for vice president, when he came up with a tie vote, he refused to step aside, forcing the resolution of the contest in the House of Representatives, which proved to be a messy affair.

The Twenty-fifth Amendment (adopted in 1967) indirectly codified the power of a candidate for president to select his vice president, for the Amendment states that when there is a vacancy in the office of the Vice President, “the President shall nominate a Vice President who shall take office upon confirmation by a majority vote of both Houses of Congress.” A Vice President, like a President, must be a natural born citizen, at least thirty-five years of age, and a resident of the United States for fourteen years.

The Twenty-fifth Amendment Suggests the Primary Qualifications for Vice Presidents: Be Equipped to Serve as President Starting, if Necessary, on Day One

I served as minority counsel to the House Judiciary Committee when the Committee was working on the Twenty-fifty Amendment. Accordingly, I recall well the difficult debates and discussions on how vacancies in the vice presidency should be filled. The procedures under discussion ranged from a special national election for the vice president, to a convening of the Electoral College to make the decision, to the selection of a vice president by the Congress.

The process that was actually settled on, as I mentioned earlier, codified the procedure that had evolved over the years, through which the candidate selected his running mate. In line with that procedure, presidents were similarly given the power to fill vacancies in the office of the vice president. But there was a crucial difference: Under the Twenty-fifth Amendment, presidents can only fill that office with the approval of a majority vote of both the House and Senate. Confirmation thus entails not only ratification by the public, but also scrutiny by political pros who assure Americans that the new vice president is up to the task of taking charge.

Twice, the Twenty-fifty Amendment has been employed to fill a vacancy in the vice presidency. Nixon appointed Gerald Ford to fill the office when Vice President Spiro Agnew resigned (under threat of indictment). Then, after Nixon resigned, and Ford succeeded to the presidency, Ford used it to appoint Nelson Rockefeller his Vice President.

Both Nixon and Ford explained their decisions, and the criteria at the top of their lists. Nixon wrote in RN: Memoirs of Richard Nixon that from “the outset of the search for a new Vice President I had established four criteria for the man I would select: qualification to be President; ideological affinity; loyalty and confirmability.” (Emphasis added.) Nixon’s first choice was his Secretary of Treasury John Connally, who was dropped because he would have confirmation problems. (Connally was, in fact, later indicted but acquitted.) New York Governor Nelson Rockefeller and California Governor Ronald Reagan were taken off Nixon’s list because the selection of either one over the other would have split the Republican Party. Finally, also on the list was Jerry Ford, the Minority Leader of the House, on whom Nixon settled.

Ford explained in A Time To Heal: The Autobiography of Gerald R. Ford that he had given considerable thought to filling the vice presidency when he became president, and his staff developed a ranking system. “There was one overriding criterion,” he wrote to explain his baseline: “[H]e had to be a man fully qualified to step into my shoes should something happen to me.”

Ford’s top aides eliminated George H. W. Bush, who had served in the House of Representatives and headed the Republican National Committee, “as not yet ready to handle the rough challenges of the Oval Office.” And when Ford settled on one of the wealthiest men in America, Nelson Rockefeller, it resulted in protracted confirmation hearings because of the extent of Rockefeller’s holdings (which might have raised conflicts of interest). But in the end, Rockefeller was confirmed.

The Twenty-fifth Amendment only covers succession to the presidency or vice presidency when one of these offices is vacant – not both. It is silent if there are vacancies in both of the offices of the President and Vice President. The scenario of concurrent vacancies has, however, been addressed by Congress, most recently in a 1947 law.

The line of succession to the presidency begins with the Speaker of the House of Representatives (currently, Nancy Pelosi of California). Next is the President pro tempore of the Senate (currently, Robert Byrd of West Virginia). Finally, if neither of these officers is willing or able to take the post, the succession law turns to the President’s Cabinet members.

Although this 1947 succession statute has been appropriately criticized, Congress has been reluctant to change it. The Congressional consensus has been that if there is a dual vacancy in the Executive branch’s elected officials, it should be temporarily filled by a seasoned elected official from the Legislative Branch. In practice, while the full line of succession has been stipulated, it is unlikely that we will ever need to go beyond the Speaker of the House to fill the vacancy temporarily.

If neither the Speaker nor the President pro tempore is up to the task of serving, Congress has been comfortable with the caliber of appointees serving as Secretaries of State, Treasury, or Defense to serve as temporary president – for no one believes (absent a dramatic situation such as a massive attack on the seat of government that would call into force continuity-of-government plans) that the succession process would ever proceed beyond the “big three” Cabinet posts.

Governor Sarah Palin Does Not Qualify Under the Implicit Constitutional Standards

Nor does Palin possess anything close to the experience qualifications of the Speaker of the House, Nancy Pelosi, or the President pro tempore of the Senate, Robert Byrd. Indeed, I feel confident that Palin could not get confirmed for any of the top presidential succession posts, namely the posts of Secretary of State, Treasury and Defense. Palin’s lack of qualifications have been widely noted. Newspapers from her state have raised questions of her qualifications.

Recently, I was in Alaska, just after Palin’s name was first floated as a possible McCain running mate. Although I am not a Democrat, I gave a keynote speech at the Democrats’ state convention. During my visit, a senior Democratic Party official said to me that he sure hoped McCain would select Palin, because based on his observation of her record Alaska, he opined that, : “She’s screwing up Alaska big time, and she could probably assure defeat for McCain.” His wish may be coming true.

This entry was posted in RagBlog and tagged American Presidents, McCain, Sarah Palin. Bookmark the permalink.

1 Response to A Little Succession History from an Expert