A Review of the Republican Tarot – R. Jehn

The Pictorial Key to the Republican Tarot: A Review
By Richard Jehn / The Rag Blog

When Mariann Wizard first began mentioning her book in the works, I didn’t think I would ever find much impetus to acquire and read it. I’m not superstitious and don’t particularly believe in divination, I disdain Republicans, and I read enough political crap as it is. But Mariann thought better of my notion and sent a copy of her book to me with heartfelt good wishes for my enjoyment as I read her new work. 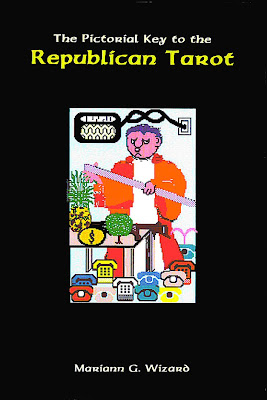 Read this book to learn something you never knew about a Republican (e.g., Dick Nixon was a cousin of the exiled King of Albania). Or read this book to divine the future (e.g., Mariann devotes an entire chapter to “The Art of Tarot Divination,” where she reminds us that it is as much about patter as it is about patterns).

Or best by far, read this book for a good laugh. For example, she writes “While I do not think that there is a pathology dedicated to politics, about various public extravagances no one can question their derangement, and if anyone does, you have only to show him or her this present volume to set aside all doubt.” That just about covers it!

Only a marvelously talented writer could describe Abraham Lincoln this way: “While the words ‘simple backwoods lawyer’ follow his name as the words ‘poop in the woods’ follow a bear, Lincoln was a successful railroad lawyer and a sophisticated philosopher.”

Mariann has chosen carefully in assigning the various Republican players to the roles in the Tarot deck. For example, she has selected Dick Nixon to play “Death.” How appropriate for someone who did his best to kill off the presidency itself. The Emperor could be none other than Ronald Reagan, for who else did so much in the early stages to bring down the Empire? As she writes, “… the sun shines brightly on-screen … allud[ing] to Reagan’s notoriously sunny outlook on problems (homelessness, joblessness, international ridicule) endured by ordinary Americans,” a benign version of Caligula at his best.

The Bush family is bestowed an entire Lesser Arcana Suite of its own, with natural roles being given to George, Sr. as the Player, Barbara as the Lady, George, Jr. as the Knave, and Jeb and Neil as the Varlets. As Mariann writes of the Varlets, “their bland, featureless, sunny surroundings reflect the essential rootlessness of a family which lived in 17 different cities and 29 houses as they were growing up.” But I’m giving away the story.

I guarantee two things if you read the Republican Tarot: you’ll learn more than you ever wanted to know about majour 20th century Republican players and you’ll laugh a hell of a lot more than you could possibly anticipate. Do yourself a favour: buy this book and enjoy every second of it. Then, one evening when you’re asking yourself what you should be doing, it will strike you that you have never divined your future from Mariann Wizard’s Republican Tarot, and your time will be filled with laughter, excitement, and good cheer.

Taroting in my two cents’ worth.

Ain’t those Republicans just a hoot! Well, Miz Wizard has captured them in all their, shall we say, zaniness. The book is delicious satire with lots of enlightening Republicana tossed in. It’s as offbeat and delightful as is its author.