The Killing of Civilians Has to Stop, on Both Sides 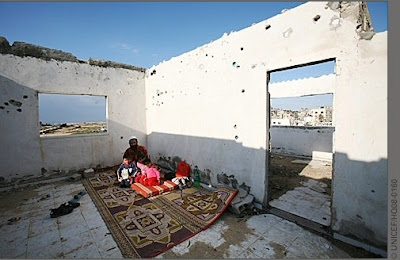 Ayman is a soft-spoken 14-year-old boy in Jabalia City, Gaza. His family is poor, and his parents have already sold almost all their furniture to pay for food and schooling for their children. Recently, after collecting a government food handout, Ayman’s father, who has been unemployed since March 2006, had to sell the milk to pay for the journey back home.

Ayman works very hard in school and dreams of a future career. But, with 47 students in his cramped classroom and double shifts the norm, his learning environment is very stressful. Home is no refuge: the recent incursion into Jabalia was 200 meters from where Ayman lives. The shooting and shelling so terrorized his five-year-old sister that she still wakes up screaming at night.

Ayman’s experience is all too familiar in Gaza’s crowded, crippled neighborhoods, where those who are least to blame for the troubles are suffering the most. Indeed, among Gaza’s 840,000 children – of which 588,000 are refugees – Ayman’s story is luckier than many. Since the recent escalation of violence that began last month, at least 33 Palestinian boys and girls have been killed and many more injured or maimed – caught in the crossfire, shot in their living rooms, or struck by explosions in their own backyards. On February 28, four children playing soccer were hit by a missile, which dismembered them so completely their own families could not identify their bodies.

Ayman, his siblings, and all Gaza’s children are finding their lives diminished each day – a cruel, slow suffocation of their spirit and their dreams. Instead of enjoying expanding horizons, they are trapped in a virtual prison, where things that every child should be able to take for granted are instead being taken away: the right to play, to go to school, to have enough to eat, to have light to study by at night, and to feel safe in their own homes. The weight of one of the world’s longest-running conflicts is resting on their thin shoulders, crushing their childhood and inflicting psychological scars that may never heal.

Palestinians were once reputed to be among the best-educated people in the Middle East; today, after years of violence, isolation, and poverty, their proud tradition of educational excellence has been shattered. Almost 2,000 children in Gaza have dropped out of school in the last five months. Those who remain must share tattered textbooks and do without crucial resources.

The January 2008 semester exams at schools in Gaza operated by the United Nations Relief and Works Agency for Palestine Refugees in the Near East (UNRWA) found 50-60 percent failure rates in mathematics and a 40 percent failure rate in Arabic – the children’s native language. Despite this, Ayman insists, “I want to be an educated person. I want to be an engineer to build my country.”

Let the world recall that Gaza’s crisis is a manmade disaster. And let the world take note that conditions are worse today than at any time since the occupation began. Seventy-nine percent of Gaza’s households live in poverty; eight out of ten depend on food assistance. Almost half the labor force is unemployed; local industry has collapsed. Water and sewage systems are failing; garbage is piling up in the streets.

UNICEF is working around the clock to restore a sense of normalcy for Gaza’s youth – developing remedial worksheets to help children keep up with their studies; creating sports and recreation programs in schools; and working with communities to establish play areas where kids can be kids in safety. UNICEF works with partners to get water, hygiene, and medical supplies to households and health facilities. And UNICEF-supported counseling teams are spread across the area, helping Palestinian parents and children cope with the burden of stress.

But, while UNICEF is doing all it can to comfort those in the midst of Gaza’s madness, only political leaders can bring the dreadful nightmare to an end. It is time for new engagement. The siege must be lifted. The killing of civilians has to stop, on both sides. Palestinian and Israeli children deserve to grow up in peace. And leaders on both sides, supported by the international community, must join in the kind of honest dialogue that is the only viable path toward achieving it.

Ayman’s father quietly says, “My children are my hope.” The children of Gaza are a light in the darkness. They deserve a chance to shine.

Her Majesty Queen Rania Al Abdullah of the Hashemite Kingdom of Jordan is UNICEF Eminent Advocate for Children. This commentary is published by DAILY NEWS EGYPT in collaboration with Project Syndicate (www.project-syndicate.org).