A Small (and, No Doubt, Temporary) Victory

The Pentagon public relations program to skew the news about Iraq probably didn’t violate any laws. It just violated the spirit of open democracy and offended my sensibilities, another inane example of BushCo manipulation and deep-seated insecurity about itself, despite the apparent arrogance. 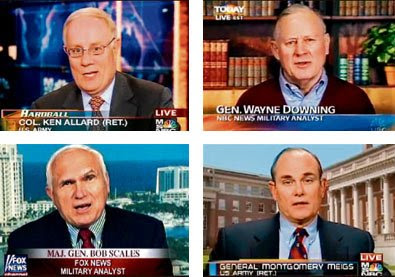 WASHINGTON — The Pentagon has suspended a program that fed information about the Iraq war to retired military officers who appeared on U.S. television networks as independent analysts, the Defense Department said on Monday.

The program, uncovered last week in a New York Times investigation, was criticized by Democrats for providing private briefings, trips and access to classified intelligence to influence analysts’ comments about Iraq and portray the situation as positive even as violence rose in the war zone.

Pentagon spokesman Bryan Whitman called the suspension “temporary” and said the Defense Department would review the program to ensure it did not violate department policy.

“It’s temporarily suspended just so that we can take a look at some of the concerns,” Whitman told reporters.

The retired military analysts program, also known inside the Pentagon as the “surrogates” program, is run by the department’s public affairs office.

That office is also conducting the review, Whitman said. He said he does not think the program violated any laws.

Under the program, retired officers hired by television networks as analysts met with senior defense officials and senior commanders both in Washington and on Pentagon-sponsored trips to Iraq.

According to The New York Times, the Bush administration sought to use the analysts to shape coverage from inside the networks.

Sen. Carl Levin, the Michigan Democrat who chairs the Senate Armed Services Committee, also said some of the analysts appeared to be working for defense contractors, raising a potential conflict of interest. (Reporting by Kristin Roberts, Editing by David Wiessler)

This entry was posted in RagBlog and tagged Bush, Media, Military. Bookmark the permalink.