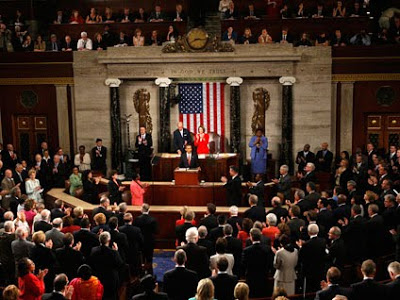 House chamber: Democrats on the left, Republicans on the right. Natural order of things?
A reassuring tone:
The President lays out his health care plan

I was pleased to see the President face down his critics, exercise leadership, and seemingly inspire the Democratic majority.

As I watched the House Chamber on the evening of September 9, 2009, I felt that it could be a turning point in the history of our Republic.

As I watched The Republicans I was reminded of the figures at Madame Tussauds, notably those in the basement of the wax museum. I was impressed to see them seated on the right side of the chamber, thus recalling the meeting of the Chamber of Deputies in Paris on May 16, 1877, the founding of The Third Republic, with the peoples’ representatives seated on the left and those representing the Monarchists, the Army and the Church on the right. Thus the political “Left” and “Right.”

Another analogy, from the events of 1877, of which President Obama should be quite familiar, were two very stressful episodes which the Third Republic faced — the Boulanger and Dreyfus Affairs — before competent governance was achieved. For us, hopefully, September 9 is a beginning.

The outburst from the Representative from South Carolina, no doubt a ‘tea-bagger,” brought to mind that the zombies of the August health care town meetings are still there and available to their handlers at very short notice. These folks must not be disregarded in the euphoria engendered by the presidential speech. They in the United States of 2009 are as omnipresent as the Brown Shirts were in Germany in 1934.

They may be stilled for the moment; however, should the necessity arise, their corporate sponsors can activate them at a moment’s notice. They are ever at the ready to vent their hostility on Obama and the liberals with such invectives as “socialist” and “Nazi,” which they do not really understand, but in their atrophic frontal lobes, equivocate with “son-of-a-bitch” or ‘mother f—–.” The hate for things good, ethical and compassionate has not disappeared.

Before turning to President Obama’s generally forthright speech, I must note that during the presentation I was haunted by the resignation of Van Jones. It seemed that President Obama was finally standing up to the right wing; however, as John Nichols pointed out in The Nation, the Van Jones exit isn’t a right-wing win, its an Obama surrender.

I am especially disturbed by the fact that the act of Van Jones signing a petition calling for further examination of the events of 9/11 was suggested as a cause for his removal. Surely any “patriotic” American should be clamoring for a full accounting of the events of 9/11, rather than accepting the policy of sweeping the truth under the rug. For those not familiar with the extensive study already underway I call your attention to Patriots Question 9-11.

Following the speech Steve Hildebrand was interviewed on MSNBC. Mr. Hildebrand, as many of you remember, was Mr. Obama’s first deputy campaign manager, who along with thousands of other campaign workers and donors had placed a full-page ad in the September 9 New York Times requesting that the President fulfill his campaign promises regarding health care reform, including a public option. In the interview with Keith Olbermann, Mr. Hildebrand give his unqualified endorsement of the speech; thus, I as an Obama donor, and signatory of the NYT petition, felt in part vindicated for prior criticism of the President’s half hearted efforts to drive his points home to the public during the summer months.

Many physicians, academics, and labor union members had wanted a single payer/ universal health insurance plan, administered by a public non-profit corporation, not by the federal government. This was documented, on the web site of Physicians for a National Health Program for many years. This, it appears, in the face of the current political environment, will be a dream unfulfilled, since it would mean the demise of the health insurance industry with its obscene profits, executive salaries and bonuses, and the baksheesh paid to our elected representatives.

Such a plan could reduce over all health care costs by some 40% and cover all health care expenses for everyone. Better that our political leaders protect corporate profits than pay attention to the sick, the chronically ill, the disabled, and the poor. Perhaps, just perhaps, at a later date we in the United States can provide health care commensurate with other that in other free world democracies via a single payer program.

I was delighted by the overall tone of Mr. Obama’s speech. He finally defined in detail what his vision of a health plan would include. He finally stood up to his critics, downplayed, but did not exclude, the concept of “bipartisanism,” and spoke to the American people. He hopefully corrected the widespread misconceptions regarding abortion, death panels, and care of illegal immigrants. Whether his opponents will listen, or instead behave in the manner of the Representative from South Carolina is to be seen.

I waited, and waited, for the references to a public option, but they finally came near the end of his presentation. I fear that if such an option is to be included in the plan it will be incumbent upon the Progressive Caucus of the House of Representatives to carry the ball. My feeling at the end was that Mr. Obama was pushing the concept of “insurance exchanges,” where, like our representatives in Congress, one has an option of what insurance to choose. Of course, this analogy is a bit flawed, as our elected officials, once they have made their choice, have the government pay something like 70% of the premiums. Another bit of hypocrisy is inherent in the claims of those elected representatives who condemn “government medicine” but who, when they need surgery, go to Bethesda Naval Hospital, a government hospital, for their own treatment.

I feel that the prime concept in Obama’s plan lies is in regulation of the insurance industry, requiring them to insure those with pre-existing illnesses, and to forbid them from dropping the insured individual once he develops a major illness. This, I am sure, would require intense government oversight of the industry, and the insurance companies doubtless have dozens of employees working on methods of circumventing the anticipated regulations while maintaining the profits and mind-blowing executive salaries.

The plan seemingly will require that by fiat all Americans must buy health insurance. I have addressed this previously in a Rag Blog article, noting that various legal scholars question the constitutionality of such a mandate. Very distressing to me is that those with the least ability to buy insurance will be those sold the policies with the highest deductibles. Let us say a person with a yearly income of $30,000 is sold a policy with a requirement that he pay the first $10,000 of medical expenses before the policy kicks in. Is this really a solution to the problem? Are the insurance and pharmaceutical industries going to concede profits for the national good? It seems that Mr. Obama has already established a secret accord with the pharmaceutical industry.

It would seem that what is envisioned is an excellent program similar to that available in Switzerland. A program implemented by the insurance companies, with various options. The Swiss government has always been a promoter of private enterprise; however, there is also a national attitude of beneficence toward the Swiss citizen. The insurance companies sell the insurance, but are strictly regulated by the government, decent profits are permissible, but there is not the dominance of the government by the corporations; the regulations are in the interest of the Swiss citizen, with corporate profits and salaries kept well within reason.

I was pleased to see the President face down his critics, exercise leadership, and seemingly inspire the Democratic majority. One hopes that the good feelings apparent last evening will carry over to the congressional and senatorial committees. I was pleased to see Mr. Obama highlight the need for revision of the Medicare Advantage programs and the Medicare prescription drug programs, both of which were put in place by the Bush administration in an effort the deplete the Medicare Trust fund through privatization making advance payouts in billions of dollars to the insurance and pharmaceutical industries.

I was also pleased with his passing reference to reducing health care costs utilizing the Gunderson Clinic model, but wish that he had gone further with specifics. He did not mention physician reimbursement for the primary care specialties, i.e. family practice, internal medicine and pediatrics, and I would hope that these specialty groups would be included in any White House think tank deliberations. In addition I wish he had addressed the scarcity of primary care physicians and the need for educational subsidies to alleviate this shortage.

Universal health care is not un-American as many Republicans espouse. Ben Mutschler PhD, from Oregon State University, has an excellent article on the History News Network entitled “Is Health Care For All Really Un-American?” In the meanwhile, until Congress acts, we will continue to see smear ads on TV aimed at the tea party types and the generally uninformed, demeaning national health care, from organizations like the Coalition for Medicare Choices, AHIP, Americans For Prosperity, 60+, Conservatives for Patients Rights, Patients United Now, Patients First, and Freedom Works. These folks are still with us.

The true spirit of what we should be thinking regarding medical care was well expressed by Rev. Jim Rigby in his article on The Rag Blog entitled “Why Is Universal Health Care Un-American? He addresses the moral aspects of health care reform, as was alluded to by The President at the end of his speech. It is fulfilling to finally see the clergy address this issue.