A Vision for the Brazilian Rain Forest Reawakens 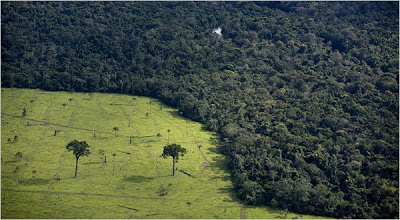 A devastated area of forest used for cattle in March in Brazil. A government plan introduced targets for reducing deforestation and carbon dioxide emissions. Photo: Lalo de Almeida for the New York Times.
Forest Plan in Brazil Bears the Traces of an Activist’s Vision
By Alexei Barrionuevo / December 21, 2008

RIO DE JANEIRO — Twenty years ago, a Brazilian environmental activist and rubber tapper was shot to death at his home in Acre State by ranchers opposed to his efforts to save the Amazon rain forest.

After his death at age 44, Francisco Alves Mendes, better known as Chico, became a martyr for a concept that is only now gaining mainstream support here: that the value of a standing forest could be more than the value of a forest burned and logged in the name of development.

This month, Brazil took what environmentalists hope will be a big step forward in realizing Mr. Mendes’s vision. The government of President Luiz Inácio Lula da Silva introduced ambitious targets for reducing deforestation and carbon dioxide emissions in a nation that is one of the world’s top emitters of this heat-trapping gas.

The plan promises to make Brazil a more influential player in global climate-change discussions, helping to push the United States and the European Union to agree to emissions cuts and head off the adverse effects of climate change. It could also encourage more pledges from wealthy countries seeking to essentially pay Brazil to preserve the forest for the good of all humanity.

But some environmentalists question whether the new targets, which would reduce Brazilian deforestation by 72 percent by 2017, are achievable in a country that has shown few signs of adjusting its development model as a major food provider to the world, especially in the midst of a global economic crisis.

To achieve the first phase of planned cuts, Brazil would have to reduce deforestation next year by 20 percent, to less than 4,000 square miles. That would be the lowest amount per year ever recorded in Brazil, said Paulo Adario, the Amazon campaign director for Greenpeace in Brazil.

Brazil’s economy is centered on the export of agricultural products, like soybeans and beef, and commodities like iron ore.

“The Brazilian model is to be the food supplier to the world and a big supplier of ethanol,” Mr. Adario said. “The economy will continue to move in the same basic direction. There is no magic in Brazil.”

Up until now, Brazil’s economic choices have driven much of the deforestation in the Amazon, he said. In the late 1960s and the 1970s, the military government encouraged landless families to settle in the region. Road-building, land speculators and ranchers followed, and the forests fell at a quickening pace.

The burning and decomposition of trees produce carbon dioxide, a greenhouse gas.

Mr. Mendes organized tappers to confront crews and flew abroad to confront lenders paying for roads. His efforts to stop logging in an area planned for a forest reserve led to his death. Since his killing, on Dec. 22, 1988, more than 20 reserves have been created, protecting more than eight million acres.

Mr. Mendes was an early advocate of the idea that people who live in the forest could create livelihoods from sustainable forest resources, rather than the one-time economic benefit of cutting down trees. Carbon financing, the compensation of forest dwellers for pursuing sustainable industries, would provide an added incentive, which is vital given the uncertain markets for natural rubber and other non-timber forest products. 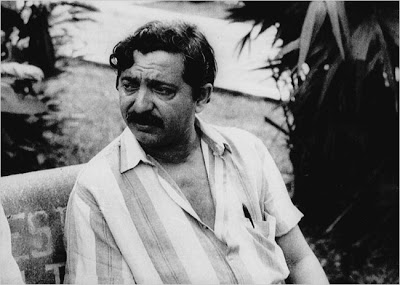 Francisco Alves Mendes, pictured in 1988, was killed by ranchers opposed to his efforts to save the rain forest. Associated Press.

“The notion that we in the north will help pay for that climate service is an important development and represents the mainstreaming of the concept that Chico Mendes and those like him were pioneers in creating,” said Richard H. Moss, the head of climate change programs at the World Wildlife Fund in Washington.

The killings of Mr. Mendes and of Sister Dorothy Stang, a 73-year-old Catholic nun who was gunned down in 2005 for speaking out against logging in the Amazon, ratcheted up international pressure on Brazil to find ways to limit forest clearing without sacrificing development.

“Brazil was always on the defensive when it came to the question of climate change,” said Carlos Minc, Brazil’s environment minister. “And now it has completely changed, passing a bolder plan than India and China.”

Mr. Minc said the plan would help meet a demand of some of the more developed countries, including the United States, which has said it would not agree to firm emissions targets until less-developed countries that produce significant amounts of greenhouse gases do the same.

Brazil’s plan would sharply slice those emissions, reducing them by some 4.8 billion tons by 2018. Some environmentalists contend that deals involving compensation for forest protection could weaken climate agreements in many ways. They also say the plan leaves the most difficult targets to the government that will follow Mr. da Silva’s. His term ends in 2010.

Still, it is viewed by some scientists and climate experts as major step forward. “For the first time we have out in the open very clear goals for reduction in deforestation,” said Walter Vergara, the lead climatologist for Latin America at the World Bank.

The global recession could end up being a godsend by lowering demand for agricultural goods.

But it could also slow the flow of technology needed to make industries more efficient and limit pledges from foreign governments like Norway, Sweden and Germany, whose payments would help preserve the forest. So far, those countries have not suggested that they would reduce their contributions, Mr. Minc said.

“The global recession and the climate crisis don’t necessarily have to be adversaries, with one competing for the resources of the other,” Mr. Minc said.

This entry was posted in RagBlog and tagged Environment, Global Warming, Latin America. Bookmark the permalink.