The Taqwacores: Giving Young Muslim Americans a Connection to Reality 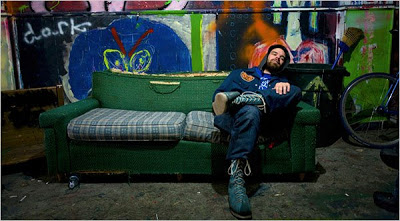 Michael Muhammad Knight, the author of “The Taqwacores,” which a college professor has called “The Catcher in the Rye” for young Muslims. Photo: David Ahntholz for The New York Times.
Young Muslims Build a Subculture on an Underground Book
By Christopher Maag / December 22, 2008

CLEVELAND — Five years ago, young Muslims across the United States began reading and passing along a blurry, photocopied novel called “The Taqwacores,” about imaginary punk rock Muslims in Buffalo.

A Muslim born in Pakistan, Naina said she spent hours on the phone listening to her older sister read the novel to her. “When I finally read the book for myself,” she said, “it was an amazing experience.”

The novel is “The Catcher in the Rye” for young Muslims, said Carl W. Ernst, a professor of Islamic studies at the University of North Carolina at Chapel Hill. Springing from the imagination of Michael Muhammad Knight, it inspired disaffected young Muslims in the United States to form real Muslim punk bands and build their own subculture.

Now the underground success of Muslim punk has resulted in a low-budget independent film based on the book.

A group of punk artists living in a communal house in Cleveland called the Tower of Treason offered the house as the set for the movie. The crumbling streets and boarded-up storefronts of their neighborhood resemble parts of Buffalo. Filming took place in October, and the movie will be released next year, said Eyad Zahra, the director.

“To see these characters that used to live only inside my head out here walking around, and to think of all these kids living out parts of the book, it’s totally surreal,” Mr. Muhammad Knight, 31, said as he roamed the movie set.

As part of the set, a Muslim punk rock musician, Marwan Kamel, 23, painted “Osama McDonald,” a figure with Osama bin Laden’s face atop Ronald McDonald’s body. Mr. Kamel said the painting was a protest against imperialism by American corporations and against Wahhabism, the strictest form of Islam.

Noureen DeWulf, 24, an actress who plays a rocker in the movie, defended the film’s message. 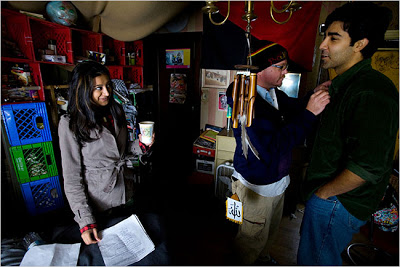 Noureen DeWulf and Bobby Naderi, both actors, with Jay Verkamp, center, the sound mixer for the film version of Mr. Knight’s novel. The film was shot in Cleveland. Photo: David Ahntholz for The New York Times.

“I’m a Muslim and I’m 100-percent American,” Ms. DeWulf said, “so I can criticize my faith and my country. Rebellion? Punk? This is totally American.”

The novel’s title combines “taqwa,” the Arabic word for “piety,” with “hardcore,” used to describe many genres of angry Western music.

For many young American Muslims, stigmatized by their peers after the Sept. 11 attacks but repelled by both the Bush administration’s reaction to the attacks and the rigid conservatism of many Muslim leaders, the novel became a blueprint for their lives.

“Reading the book was totally liberating for me,” said Areej Zufari, 34, a Muslim and a humanities professor at Valencia Community College in Orlando, Fla.

Ms. Zufari said she had listened to punk music growing up in Arkansas and found “The Taqwacores” four years ago.

“Here was someone as frustrated with Islam as me,” she said, “and he expressed it using bands I love, like the Dead Kennedys. It all came together.”

The novel’s Muslim characters include Rabeya, a riot girl who plays guitar onstage wearing a burqa and leads a group of men and women in prayer. There is also Fasiq, a pot-smoking skater, and Jehangir, a drunk.

Mr. Muhammad Knight was born an Irish Catholic in upstate New York and converted to Islam as a teenager. He studied at a mosque in Pakistan but became disillusioned with Islam after learning about the sectarian battles after the death of Muhammad.

He said he wrote “The Taqwacores” to mend the rift between his being an observant Muslim and an angry American youth. He found validation in the life of Muhammad, who instructed people to ignore their leaders, destroy their petty deities and follow only Allah.

After reading the novel, many Muslims e-mailed Mr. Muhammad Knight, asking for directions to the next Muslim punk show. Told that no such bands existed, some of them created their own, with names like Vote Hezbollah and Secret Trial Five.

“As Muslims, we’re not being honest if we criticize the United States without first criticizing ourselves,” said Mr. Kamel, 23, who grew up in a Syrian family in Chicago. He is lead singer of the band al-Thawra, “the Revolution” in Arabic.

For many young American Muslims, the merger of Islam and rebellion resonated.

Hanan Arzay, 15, is a daughter of Muslim immigrants from Morocco who lives in East Islip, N.Y. In the months after the Sept. 11 attacks, pedestrians threw eggs and coffee cups at the van that transported her to a Muslim school, she said, and one person threw a wine bottle, shattering the van’s window.

At school, her Koran teacher threw chalk at her for requesting literal translations of the holy book, Ms. Arzay said. After she was expelled from two Muslim schools, her uncle gave her “The Taqwacores.”

“This book is my lifeline,” Ms. Arzay said. “It saved my faith.”

This entry was posted in RagBlog and tagged American Society, Islam, Literature. Bookmark the permalink.

2 Responses to The Taqwacores: Giving Young Muslim Americans a Connection to Reality