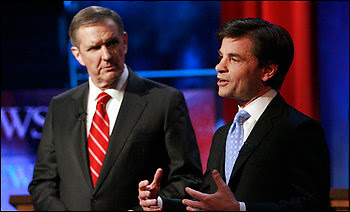 NEW YORK — In perhaps the most embarrassing performance by the media in a major presidential debate in years, ABC News hosts Charles Gibson and George Stephanopolous focused mainly on trivial issues as Hillary Clinton and Barack Obama faced off in Philadelphia.

Wars in Iraq and Afghanistan, the health care and mortgage crises, the overall state of the economy and dozens of other pressing issues had to wait for their few moments in the sun as Obama was pressed to explain his recent “bitter” gaffe and relationship with Rev. Wright (seemingly a dead issue) and not wearing a flag pin while Clinton had to answer again for her Bosnia trip exaggerations.

Then it was back to Obama to defend his slim association with a former ’60s radical — a question that came out of rightwing talk radio and Sean Hannity on TV, but delivered by former Bill Clinton aide Stephanopolous. This approach led to a claim that Clinton’s husband pardoned two other ’60s radicals. And so on.

More time was spent on all of this than segments on getting out of Iraq and keeping people from losing their homes and other key issues. Gibson only got excited when he complained about anyone daring to raise taxes on his capital gains.

Yet neither candidate had the courage to ask the moderators to turn to those far more important issues. But some in the crowd did — booing Gibson near the end.

Yet David Brooks’ review at The New York Times concluded: “I thought the questions were excellent.” He gave ABC an “A.”

But Tom Shales of The Washington Post had an opposite view: “Charlie Gibson and George Stephanopoulos, turned in shoddy, despicable performances.”
*
Greg Mitchell is author of the new book, “So Wrong for So Long: How the Press, the Pundits — and the President — Failed on Iraq.” It features a preface by Bruce Springsteen and a foreword by Joe Galloway.

When Barack Obama met Hillary Clinton for another televised Democratic candidates’ debate last night, it was more than a step forward in the 2008 presidential election. It was another step downward for network news — in particular ABC News, which hosted the debate from Philadelphia and whose usually dependable anchors, Charlie Gibson and George Stephanopoulos, turned in shoddy, despicable performances.

For the first 52 minutes of the two-hour, commercial-crammed show, Gibson and Stephanopoulos dwelled entirely on specious and gossipy trivia that already has been hashed and rehashed, in the hope of getting the candidates to claw at one another over disputes that are no longer news. Some were barely news to begin with.

The fact is, cable networks CNN and MSNBC both did better jobs with earlier candidate debates. Also, neither of those cable networks, if memory serves, rushed to a commercial break just five minutes into the proceedings, after giving each candidate a tiny, token moment to make an opening statement. Cable news is indeed taking over from network news, and merely by being competent.

Gibson sat there peering down at the candidates over glasses perched on the end of his nose, looking prosecutorial and at times portraying himself as a spokesman for the working class. Blunderingly he addressed an early question, about whether each would be willing to serve as the other’s running mate, “to both of you,” which is simple ineptitude or bad manners. It was his job to indicate which candidate should answer first. When, understandably, both waited politely for the other to talk, Gibson said snidely, “Don’t all speak at once.”

For that matter, the running-mate question that Gibson made such a big deal over was decidedly not a big deal — especially since Wolf Blitzer asked it during a previous debate televised and produced by CNN.

The boyish Stephanopoulos, who has done wonders with the network’s Sunday morning hour, “This Week” (as, indeed, has Gibson with the nightly “World News”), looked like an overly ambitious intern helping out at a subcommittee hearing, digging through notes for something smart-alecky and slimy. He came up with such tired tripe as a charge that Obama once associated with a nutty bomb-throwing anarchist. That was “40 years ago, when I was 8 years old,” Obama said with exasperation.

Obama was right on the money when he complained about the campaign being bogged down in media-driven inanities and obsessiveness over any misstatement a candidate might make along the way, whether in a speech or while being eavesdropped upon by the opposition. The tactic has been to “take one statement and beat it to death,” he said.

No sooner was that said than Gibson brought up, yet again, the controversial ravings of the pastor at a church attended by Obama. “Charlie, I’ve discussed this,” he said, and indeed he has, ad infinitum. If he tried to avoid repeating himself when clarifying his position, the networks would accuse him of changing his story, or changing his tune, or some other baloney.

This is precisely what has happened with widely reported comments that Obama made about working-class people “clinging” to religion and guns during these times of cynicism about their federal government.

“It’s not the first time I made a misstatement that was mangled up, and it won’t be the last,” said Obama, with refreshing candor. But candor is dangerous in a national campaign, what with network newsniks waiting for mistakes or foul-ups like dogs panting for treats after performing a trick. The networks’ trick is covering an election with as little emphasis on issues as possible, then blaming everyone else for failing to focus on “the issues.”

Some news may have come out of the debate (ABC News will pretend it did a great job on today’s edition of its soppy, soap-operatic “Good Morning America”). Asked point-blank if she thought Obama could defeat presumptive Republican contender John McCain in the general election, Clinton said, “Yes, yes, yes,” in apparent contrast to previous remarks in which she reportedly told other Democrats that Obama could never win. And in turn, Obama said that Clinton could “absolutely” win against McCain.

To this observer, ABC’s coverage seemed slanted against Obama. The director cut several times to reaction shots of such Clinton supporters as her daughter, Chelsea, who sat in the audience at the Kimmel Theater in Philly’s National Constitution Center. Obama supporters did not get equal screen time, giving the impression that there weren’t any in the hall. The director also clumsily chose to pan the audience at the very start of the debate, when the candidates made their opening statements, so Obama and Clinton were barely seen before the first commercial break.

At the end, Gibson pompously thanked the candidates — or was he really patting himself on the back? — for “what I think has been a fascinating debate.” He’s entitled to his opinion, but the most fascinating aspect was waiting to see how low he and Stephanopoulos would go, and then being appalled at the answer.