Addicting You to Your Drinking Water

I facetiously used to say that they put heroine in chapstick because it seemed to be so addicting. Now the over-regulation of the disposal of medical “controlled substances” endangers us with our drinking water. Good one, government !! 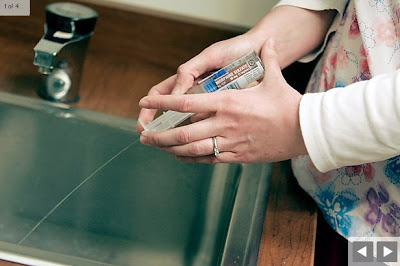 A nurse uses a syringe filled with water to demonstrate how the many hospitals and nursing homes dump leftover medications into sinks. Tightly controlled narcotics, stimulants, depressants and steroids are often emptied into sinks and toilets. Jim Mone, AP
Controlled Drugs Dumped Into Water
By Jeff Donn / September 15, 2008

MINNEAPOLIS — In a frustrating quirk in government policy, the most tightly controlled drugs — like painkilling narcotics prone to abuse — are the ones that most often elude environmental regulation when they become waste.

Many would like to send controlled substances to landfills or incinerators to keep them out of waterways as much as possible. Instead, they are nearly always dropped into sinks and toilets by hospitals, nursing homes and other long-term care facilities.

The problem is huge, because more than 365 medicines are controlled by the U.S. Drug Enforcement Administration — almost 12 percent of all prescriptions, the agency says. They include widely used narcotics, stimulants, depressants and steroids — drugs like codeine, morphine, oxycodone, diazepam (often sold as Valium) and methylphenidate (often sold as Ritalin).

At Abbott Northwestern Hospital here, nurse Keri Osborne recently was opening a locked room at a spine surgery unit, where a machine must check her fingerprints before she pours unused controlled drugs into the sink.

“Back pain, so there’s a lot of narcotics here,” she explains. Much of the waste consists of liquid in syringes that aren’t completely emptied when used to treat patients.

It would be very expensive to do otherwise. “Managing controlled substances, the cost goes up just through the roof,” he says.

In nearby Robbinsdale, North Memorial Medical Center pours 50 gallons of controlled substances into its drains annually rather than pay $25,000 to handle and haul it away for safer disposal, says regulated waste coordinator Jerry Fink.

Part of the cost is due to federal rules that state anyone who handles controlled substances, other than a user, must be certified as a police officer or registered with the DEA. That goes for pharmacists, distributors, even waste handlers.
State waste regulators take their cue from federal law and regulations.

Thus, typical assisted-living centers, which are not registered with the DEA, cannot collect unused controlled drugs of residents for offsite disposal.

Even the destruction of controlled drugs must be meticulously documented, so they aren’t diverted to addicts. Medical facilities typically send a second staffer to bear witness when controlled substances are poured into sinks or toilets.

Many waste experts now want to rewrite the rules so a broader range of professionals can handle leftover controlled drugs. “And DEA — truth be told — has not been very cooperative and responsive in that regard,” says waste consultant Catherine Zimmer at the University of Minnesota.

That could change. The DEA declined requests for an on-the-record interview, but in a statement, spokeswoman Rogene Waite said: “DEA is currently developing regulations to allow for the safe and effective destruction of controlled substances.”

Ben Grumbles, the Environmental Protection Agency’s water administrator, confirmed his agency has participated in these discussions. He would not provide details, but called the talks productive.