Afghanistan: It’s Acknowledged to Be a Failed State 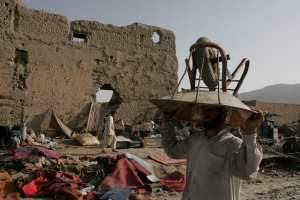 Afghanistan, which served for so many years as a buffer between warring nations, is today riven by conflicts imported from abroad. Barnett R Rubin weighs the obstacles to restoring stability.

The past 35 years in Afghanistan have seen the end of the country’s status as an isolated buffer state. In the past, agreement among neighbours and great powers not to intervene in Afghanistan meant that the state served to limit the spread of conflicts; but today virtually the entire international community is involved in Afghanistan, and all the conflicts and disputes among its member states and organisations are playing out within its borders.

Ten years ago Afghanistan was home to a low-intensity conflict between the Taliban and Northern Alliance, but it was also the scene of Indo-Pakistan and Sunni-Shia conflicts and, to a certain extent, US-Iranian-Russian competition over pipeline routes. These conflicts have become more intense at the same time that Afghanistan has become the theatre for the War on Terror, the ill-defined confrontation of the US and global Islamist movements; the conflict between Nato and Russia; the confrontation between the US and Iran; the struggle within Pakistan over that country’s future; and a key theatre of a transnational insurgency spanning Afghanistan and Pakistan and linked to al Qa’eda. All of this alongside an intensification of the ethnic, tribal, regional and sectarian cleavages that have always marked Afghan politics.

If it seems unlikely that Afghanistan can return to its days of isolation, that is because all of the elements that enabled it to survive in relative stability for nearly a century have disappeared: a population largely isolated in remote valleys with few links to the outside world, some small arms and no organisation above the local level; a government subsidised by great powers and accepted as legitimate by all its neighbours; and an economy largely based on subsistence farming, pastoralism, limited pockets of commercial agriculture and trade.

The territory of today’s Afghanistan has never sustained a state without international aid to its security forces, and it has repeatedly collapsed in the face of invasion or contestation. The stability of such a state would require a level of income and legitimacy sufficient to recruit and maintain security forces adequate to defend against any threats to the state; in the current environment, that is a tall order indeed.

Three key elements ensured Afghanistan’s stability after it was first demarcated as a buffer between the British and Russian empires in the 19th century. First and foremost, the great powers themselves agreed not to interfere inside Afghanistan or use Afghanistan’s weakness against each other, ensuring few international challenges to the Afghan state and the separation of rival powers by a neutralised Afghanistan. Second, the population remained disarmed, demobilised and isolated, without political organisation and largely engaged in subsistence activities, resulting in few domestic demands on the state or challenges to its legitimacy. And third, international subsidies to the state enabled it to finance security forces adequate to the low-threat environment.

The events of September 11 made it clear that the Afghan state was weak and no longer integrated into the global community, and that its territory was home to the leadership of a highly organised global network of political violence. The American response was to destroy the weak government of the Taliban and call on the UN to try to rebuild the Afghan state. But resurrecting the previous Afghan state under current conditions may be doomed to failure.

Afghanistan’s relationship to the international system has changed decisively. Virtually every major international organisation and influential state has become involved there. But the result has been to import innumerable other conflicts into the country. First, of course, is the War on Terror, which as defined by the Bush administration includes not only the destruction of al Qa’eda, but also the destruction of organisations or states that harbour or support “terrorists”. Second, the conflict between India and Pakistan; Pakistan seeks to exclude Indian influence from Afghanistan, which it considers part of its security perimeter; India considers a presence in Afghanistan important to gain a back window into Pakistan. Third, a Sunni-Shia conflict, since Saudi Arabia and Iran, which still compete for the leadership of the Islamic world, both have proxies in Afghanistan. The situation in Afghanistan is also straining American relations with its Nato allies – who, though they opposed the war in Iraq, agreed to deploy troops to Afghanistan – and increasing already high tensions between America and Russia, which supports the war and sanctions against the Taliban, but does not want a permanent Nato deployment in its backyard. Finally there is the conflict between the US and Iran; the two countries worked together to overthrow the Taliban and bring the current Afghan government to power, but the Bush administration rebuffed Iran’s overtures. Iran has furnished support to insurgents as a warning of the consequences that might follow an American attack. In short, the number of stakeholders is now prohibitively high to secure agreement on who will hold power.

The Afghan population is no longer isolated and quiescent. Every group has been mobilised militarily and politically and enjoys some patronage from foreign powers or movements. Afghans have been heavily politicised and listen incessantly to international news. At least half of Afghans have suffered war displacement and perhaps a third travelled abroad (largely as refugees). The subsistence economy has been largely destroyed, and Afghanistan relies on imports of food and exports of a cash crop – narcotics. Afghans are participating in global labour, commodity and capital markets and in global politics and warfare. The expansion of cash transactions has empowered ideological groups, including the ulama and Islamists, that do not own or control physical assets, but can assert rights to their share of this income. Without a cash economy, the Taliban regime would not have been possible.

As community coping mechanisms have become less reliable, families and communities increasingly look to the state for income and services. Afghanistan has become the most rapidly urbanising society in Asia, and demands for public services and political participation have risen accordingly. The demands placed on the state are far greater and the task of legitimation far more difficult than at any time in the past. Hence the type of weak state that functioned with a quiescent Afghan society is no longer feasible or effective; yet the state is still structured and resourced to maintain control, not provide services.

Under these conditions stability would require a state and security forces with substantially more resources and capabilities than at any time in the past. Currently the Afghan government extracts about seven per cent of licit GDP in revenues. The entire defence and development budget is paid for by foreign assistance; an even greater amount is spent by donors outside of the government budget. The size of the armed forces and police that Afghanistan needs to maintain its own security continues to rise, and there is no scenario under which the country would be able to finance such costs. Hence the Afghan state is now on an unsustainable trajectory.

Of the three trends outlined above, the increase in mobilisation, politicisation, education and urbanisation of the Afghan population is least likely to be reversed. It is difficult but not impossible to imagine the mounting external tensions becoming less threatening: if the top leadership of al Qa’eda in Pakistan is neutralised, a political settlement with insurgents might become more feasible. US-Iran relations might warm slightly. If an elected government led by civilians with a primarily economic program remains in power in Pakistan, we might see a shift in in Pakistan-India relations from confrontation to competition and even economic co-operation. The reduction of the level of threat would also favour investment and economic activity. Such growth might make it possible to increase the tax base as well as the government’s share of GDP to pay for public services.

These do not, however, seem to be the most likely trends. While the next US administration is likely to seek less confrontational and militaristic ways of coping with global challenges, the persistence of al Qa’eda in Pakistan could create pressure for broader intervention there, destabilising that country and its neighbour further. Any number of unpredictable events – another major al Qa’eda attack in the US leading to reprisals in Pakistan; a riot in Kabul or another Afghan city; the collapse of a regional centre (most likely Kandahar) under Taliban assault – could precipitate a rapid crisis.

There are several policy approaches that might begin to address these threats, including a renewal of regional diplomacy and economic co-operation to lower present tensions; the development of a plan to properly finance the Afghan security forces; phasing out the most intrusive aspects of the counter-terrorism campaign in the country; expanding Afghan higher education and employment to provide opportunities to educated young people; and strengthening the legitimacy of the central government by taking strong action against corruption.

But there is still no foreseeable trajectory under which the Afghan state will become a self-sustaining member of the international community at peace with its neighbours in the coming decade. It might be possible, however, to approach rather than recede from that goal.

Barnett R Rubin, Director of Studies at the Center on International Cooperation at NYU, is the author of The Fragmentation of Afghanistan.