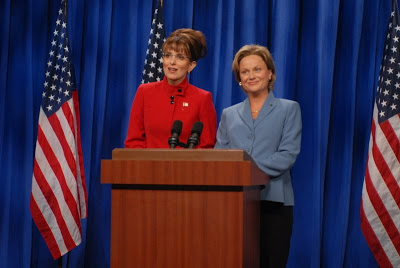 ‘Fey stood beside her good friend and fellow castmate Amy Poehler, whose Hillary Clinton has been one of the high points of recent “SNL” history’
By Maureen Ryan / September 14, 2008

See Video and transcript, below.

As it used to be years ago, the word “live” was appropriate.

Would Fey appear on the show’s season-opener Saturday, sporting Palin’s trademark rimless glasses? Speculation raged about that all week, and of course, “SNL” executive producer Lorne Michaels was coy about whether Fey, who left the show a few years ago for “30 Rock,” would stop by her old stomping grounds. Of course she would… right?

The end result of all the suspense: Forget DVRs, forget on-demand TV, forget YouTube, forget firing up your WiFi connection. All across America, people were parked in front of their TV sets late Saturday night.

As the program came on (at 10:30 p.m. Central time), there was Fey in a bright red blazer. She was the spitting image of Palin (or wait, is Palin the spitting image of Fey?). Even Fey’s flat Palin-esque accent was perfect; Fey had obviously closely studied the interviews that Palin gave to ABC on Thursday and Friday.

TV viewers will have a tough choice this year, as they struggle to decide which is more interesting: The ongoing reality show featuring Sen. Barack Obama, McCain and Palin, or Tina Fey doing her pitch-perfect version of Palin. We should have at least a few more opportunities to observe the latter, as “SNL” exploits the foibles of the election season every weekend and on three “SNL” specials that will air on Thursdays this fall.

On “SNL,” . They slung barbs that took sharp aim at Palin’s experience — or lack thereof — and at the perception that Clinton has been relentlessly ambitious.

“Mine! It’s supposed to be mine!” Poehler-as-Clinton said. “I need to say something. I didn’t want a woman to be President. I wanted to be President and I just happen to be a woman.”

Both women agreed on one thing: That sexism had become an issue in the campaign. It was an issue that “frankly surprised to hear people suddenly care about,” Poehler-as-Clinton deadpanned.

As she spoke, Fey-as-Palin struck sexy poses and pretended to fire a shotgun. “What an amazing time we live in,” she said. “To think that just two years ago, I was a small town mayor of Alaska’s crystal meth capitol.”

Earlier, she talked up her foreign policy credentials: “I can see Russia from my house!”

Host Michael Phelps couldn’t help but be overshadowed by Fey’s terrific turn as Palin. Sketches about a couple’s ugly children (pictured above) and a weird swim coach (below) didn’t come close to the level of the opening sketch. Nothing in the rest of the broadcast did really (and Obama, after reports emerged that he would be a guest, was a no-show on Saturday; he decided not to appear thanks to the destruction Hurricane Ike was causing).

The show’s “Weekend Update” segment featured some Palin comedy as well. As Poehler noted, recent polls show McCain “only six points behind Sarah Palin.” Perhaps there wasn’t enough Palin though — raise your hand if you thought the “Weekend Update” commentary from the comic-strip character Cathy was a good idea.

Minutes after the Clinton-Palin sketch aired on “SNL,” a spokesman for the show sent out a full transcript of the piece, and I’ve reprinted it in full below.

FEY AS PALIN: “Good evening, my fellow Americans. I was so excited when I was told Senator Clinton and I would be addressing you tonight.”

POEHLER AS CLINTON: “And I was told I would be addressing you alone.”

FEY AS PALIN: “Now I know it must be a little bit strange for all of you to see the two of us together. What with me being John McCain’s running mate.”

POEHLER AS CLINTON: “And me being a fervent supporter of Senator Barack Obama — as evidenced by this button.”

FEY AS PALIN: “But tonight we are crossing party lines to address the now very ugly role that sexism is playing in the campaign.”

POEHLER AS CLINTON: “An issue which I am frankly surprised to hear people suddenly care about.”

FEY AS PALIN: “You know, Hillary and I don’t agree on everything…”

POEHLER AS CLINTON: (OVERLAPPING) “Anything. I believe that diplomacy should be the cornerstone of any foreign policy.”

FEY AS PALIN: “And I can see Russia from my house.”

POEHLER AS CLINTON: “I believe global warming is caused by man.”

FEY AS PALIN: “And I believe it’s just God hugging us closer.”

POEHLER AS CLINTON: “I don’t agree with the Bush Doctrine.”

POEHLER AS CLINTON: “But Sarah, one thing we can agree on is that sexism can never be allowed to permeate an American election.”

FEY AS PALIN: “So please, stop photoshopping my head on sexy bikini pictures.”

POEHLER AS CLINTON: “And stop saying I have cankles.”

POEHLER AS CLINTON: “And don’t refer to me as a [flurge]. I Googled what it stands for and I do not like it.”

FEY AS PALIN: “So we ask reporters and commentators, stop using words that diminish us, like ‘pretty,’ ‘attractive,’ ‘beautiful.'”

FEY AS PALIN: “While our politics may differ, my friend and I are both very tough ladies. You know it reminds me of a joke we tell in Alaska…”What’s the difference…

FEY AS PALIN: “…between a hockey mom…”

FEY AS PALIN (AFTER A BEAT): “Lipstick. Just look at how far we’ve come. Hillary Clinton, who came so close to the White House. And me, Sarah Palin, who is even closer. Can you believe it, Hillary?”

POEHLER AS CLINTON: (AFTER A PAUSE)”I can not.”

FEY AS PALIN: “It’s truly amazing and I think women everywhere can agree, that no matter your politics, it’s time for a woman to make it to the White House.”

POEHLER AS CLINTON: “No. Mine! It’s supposed to be mine! I need to say something. I didn’t want a woman to be President. I wanted to be President and I just happen to be a woman. And I don’t want to hear you compare your road to the White House to my road to the White House. I scratched and clawed through mud and barbed wire and you just glided in on a dog sled wearing your pageant sash and your Tina Fey glasses.”

FEY AS PALIN:
“What an amazing time we live in. To think that just two years ago, I was a small town mayor of Alaska’s crystal meth capitol. And now I am just one heartbeat away from being President of the United States. It just goes to show that anyone can be President.”

POEHLER AS CLINTON: “Anyone.”

POEHLER AS CLINTON: (LAUGHS) “Yeah, you know, Sarah, looking back, if I could change one thing, I should have wanted it more.” (RIPS OFF PIECE OF PODIUM)

FEY AS PALIN: “So in the next six weeks, I invite the media to be vigilant for sexist behavior.”

POEHLER AS CLINTON: “Although it is never sexist to question female politicians credentials. Please ask this one about dinosaurs. So I invite the media to grow a pair. And if you can’t, I will lend you mine.”

FEY AS PALIN: And as we say in Alaska…

POEHLER AS CLINTON: “We say it everywhere…”