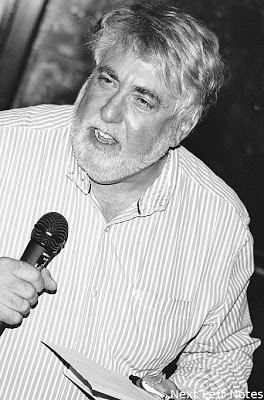 Beneath the gray beard and the wrinkles I could clearly see the boyish face of the 20-year-old SDS leader.

[Thomas Good is the editor of Next Left Notes, where this interview also appears.]

I first photographed Mark Rudd in 2006, at Drew University. I was struck immediately by something trapped in the lens of my camera: the 60-year-old face of Rudd contained a hidden image. Beneath the gray beard and the wrinkles I could clearly see the boyish face of the 20-year-old SDS leader. When I mentioned this to Mark he agreed immediately — Rudd’s boyish enthusiasm had not dissipated with age.

Over the next three years I photographed Rudd a number of times. I filmed an MDS Public Service Announcement with him. I witnessed an interesting exchange as Rudd and Tom Hayden traded wisecracks. And I argued with Rudd on a variety of topics. In every instance, I found Mark to be very generous and very gracious, a bit smug and undeniably a smartass. Conversations with Rudd reveal a very charming arrogance — and this is not a negative assessment. Mark has worked diligently to redefine himself and in the process has been his own harshest critic. The self-conscious metamorphosis transformed a 20-year-old advocating armed struggle into a nonviolent 61-year-old activist committed to calm, patient organizing — and a Lefty with a sense of humor, a rare commodity. I am fortunate to have the opportunity to disagree with Mark on a regular basis — he embodies Murray Bookchin’s ideal of democratic debate and discourse.

After SDS and Weather, Mark moved to New Mexico where he taught algebra at the college level. As someone who barely survived algebra in college, I needed help when my teenage son was struggling with the A-word. I contacted Mark. He responded immediately and offered useful suggestions. Typical Rudd.

In 2008, Mark asked if he could use one of my photographs [the Drew University shot] in his new book. I said of course — Mark had previously mentioned that he had decided to spend some time finishing his memoir and I was glad to be involved in a minor way.

Underground: My Life In SDS And The Weathermen was released on March 23, 2009, and there were two signings in New York that week. I caught the second and videotaped some of the event. The book signing was held at Rudd’s old hangout, the West End Bar. A number of Columbia SDS veterans showed up — as did former Weather Underground activist Cathy Wilkerson who released her memoir last year. Wilkerson, an impressive speaker in her own right, thanked Mark for his generosity and told the crowd that Rudd had made the transition back from a militant, tough-talking activist into what he always was, beneath the bluster: “a really nice guy”.

Tom Good: What do you think of Obama so far?

Mark Rudd: I think he’s acted in an extremely predictable way, knowing what we already know about him. He’s cautious and strategic. He knows that there is no mandate yet for abrupt shifts to the left. I think he’s trying to work toward improvement on the economy, healthcare, education, and Israel. On Afghanistan, no. He knows that the biggest internal enemy is the military-industrial-security complex, and he’s not going to give them the excuse to organize to defeat him (as they defeated Kennedy). I know that the official left position is that JFK was a cold-warrior, no different from any others, but I’ve been reading “Brothers,” by David Talbot, a good journalist who makes a compelling case for the fact that the military and CIA loathed Kennedy and conspired to kill him. Since Obama isn’t a leftist (thank God), he’s not hampered by our prejudices. I’m sure he believes that Kennedy was killed by the military and CIA. JFK had zero control over both. They rarely carried out his orders.

TG: What do you make of his appointments?

MR: All terrible at the top level, except maybe Hillary Clinton, whom I’m expecting to win a Nobel prize for forcing the Israelis to accept a settlement. Who but the nation’s #1 shiksa, a certified lover of Israel, would the rightwing accept to force the settlement? That was a strategic appointment. All the others are strategic in the same way–giving the right the top positions. The trick is to look at the next level, where Podesta put center-leftists, predominantly. He learned from Cheney. Actually, the director of CIA, Minetta, a center-leftist, probably gave them conniptions.

TG: What is your view of the Ayers bashing that started with the election and is ongoing?

MR: Obama has almost no chinks in his armor. The right has very few ways in, and they’re so stupid that they don’t realize that the Ayers business has zero traction outside their own circles. Don’t ever underestimate the far right’s utter stupidity.

TG: You often say that Columbia SDS represented some great organizing – what in particular is noteworthy and/or useful to young activists?

MR: That’s why I spent so much time on it in my book. The chapter was run by red-diaper babies who knew nothing but old-style traditional organizing–patient, long term, base-building, coalition-building, involving engagement between people you’re trying to win over. Lots of study,analysis, research. The Praxis Axis was right! Of course the irony was that Ted Gold and David Gilbert got seduced by the apparent success of “militancy” at Columbia.

TG: Can you tell me about any organizing you are doing now in your community?

MR: My wife and I are organizing around environmental justice and health issues in our neighborhood, a working-class chicano/mexicano neighborhood. We have a bilingual “Neighborhood Association,” involving rich and poor, brown and white, immigrants and US citizens. It’s NOT ideological: we rarely push our left analysis, though people know who I am. Many republicans among us.

Also, I’m working with a small group called “Another Jewish Voice” to create a pro-peace in the middle east lobby in New Mexico. We’ve had some good luck with the congressional delegation, primarily because my wife and I are involved heavily in electoral politics.

Marla is the chair of New Mexico Conservation Voters. They’ve achieved almost a green majority in the state legislature. Both of us work on local Demo electoral campaigns, and have had some success electing progressives lately (after years and years of losing). We’re both on the central committee of the county Demo party !!

TG: Why should NLN readers buy your book – and can they get signed copies?

MR: It’s a great story, that’s why I hope people read it. I tried to be accurate and honest. I’m not pushing left heroism. I’m just this kid from the suburbs who got involved in the movement. It’s a story of good organizing followed by bad (Weatherman).

You know, I don’t believe in signed copies. What are they good for? I do it because people want them. Go to Morningside Bookshop at the corner of Broadway and West 114th St and you’ll find all the signed copies you might want. Readers can check out my “Book Tour” page on my website, http://www.markrudd.com/ www.markrudd.com to meet me and I’ll sign their copies.

TG: What do you have to say to Radosh’s comment that you haven’t grown up (and abandoned your Lefty beliefs)?

MR: Poor Ronald Radosh is a right-winger. His assuption is that anything left is childish. What more is there to say, except see my comment above on rightists’ intelligence.

TG: Do you support BDS [ Boycott, Divestment and Sanctions ] as a means of ending apartheid in Israel?

MR: Absolutely. My group is attempting to get a campaign going in New Mexico.

TG: How is your mother doing? Is she pleased about the new book?

MR: My mother is lucid less than 50% of the time. She’s thrilled about the book, though she seems fixated on the question of how I make money off it. Since I have no idea how the money works, I can’t explain it to her or anyone else. That confuses her even more, because she can’t understand why I’m so ignorant.

TG: Is there any hope I’ll ever learn algebra?

MR: Yes! Come out to New Mexico, hang with me a week or so, and I’ll help you figure it out. The trick to algebra is the ability to pay attention, and I know you have that. You’re just defeated by your own self-conception as a person who can’t learn algebra. It’s simple. I use geometry drawings to explain it.