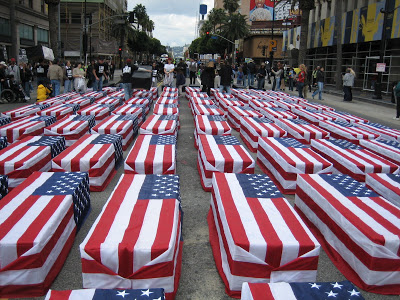 [Doug Zachary is a regular contributor to The Rag Blog. A veteran, he is president of the Austin chapter of Veterans for Peace and is a member of MDS/Austin.]

This weekend (June 7-8) we gathered for the first session of “Cline’s Corner,” a veterans’ writing workshop sponsored by Veterans for Peace (VPF), Chapter 66 and held in Austin, Texas at the home of venerable VFP member and noted photographer, Alan Pogue, and fierce warrior/lawyer D’Ann Johnson.

The writers’ “sangha” is conducted in a Zen Buddhist form inherited from Thich Nhat Hahn, a world renowned Buddhist monk from Hue, Viet Nam, who has been working for 40 years among United States Veterans to heal the wounds of the American War through meditation and self-expression via poetry and prose. For fifteen years Maxine Hong Kingston has brought this sangha form to military veterans and has led us, through “deep listening” and the development of compassionate and awakened hearts, to heal ourselves and each other and to publish an astonishing collection of our stories.

Four active duty soldiers from Fort Hood joined us, along with a member of Military Families Speak Out whose husband is on his third tour in Iraq. During the check-in period the soldiers each spoke of childhoods weighted with class inequities, loneliness and violence, of the propaganda that led them to join the military, and of their personal awakenings. The MFSO wife told us about her husband’s Purple Heart and of how it felt to have her husband redeployed for his third tour, even when his wounds prevented him from wearing protective gear. One soldier announced that, although he had been applying for warrant officer status and a lIfetime in the military when we met six weeks ago, he was now submitting his application for conscientious objector status. Laura Beth, the founder of Daughters of Viet Nam Veterans, wrote a truly amazing piece in which she told her personal story, about a childhood with (hah, actually without) a father who had been destroyed psychologically and spiritually in Viet Nam.

Other participants included Alan (Pogue), combat medic in Viet Nam who set the stage by speaking from deep within his heart about the suffering he witnessed in Viet Nam and which he had felt powerless to stop. David Hamilton of MDS/Austin (Movement for a Democratic Society) told us (too briefly, for my taste) about the day that he and David Cline were attacked by shotgun toting KKK members on a country road in Central Texas. One of the soldiers told about an incident in Iraq where he had almost killed a seven year old girl, only to have the incident end with his looking deep within her sweet and innocent eyes and how in that moment he had begun to know himself.

Two other soldiers, not yet sent to Iraq, told us of their spiritual struggles with the meaning of responsible citizenry and the ever-diminishing role of military authority in their lives. Another veteran of 23 years in the military told us about the over 1,300 days that he had spent in the Middle East and how he had come to realize that the United States was NOT deployed in the region to promote world peace. Another participant spoke of her 25-year marriage to an F-111 pilot and how he had seen through the macho image of fighter pilot which the mainstream consciousness had offered him as an identity and how she had known him for the sweet transcendent poet hidden within. I will soon publish a feature article in the Texas Observer where you will be able to hear the other stories we shared and witnessed. The sangha, at the end of an emotionally charged and spiritually transcendent day together, elected to meet monthly rather than quarterly. We are launched; we are blessed.

Saturday night we reconvened at Jovita’s [an Austin Mexican restaurant and music venue] for a fundraiser for Texans For Peace. Charlie Jackson and Alyssa Burgin had organized an event which turned out to be THE precise tonic needed by our soldier allies. Brady Coleman, an attorney for the Oleo Strut [GI anti-war coffee house in Killeen, Texas, near Ft. Hood, during the Viet Nam war], led off the night with his band, the Melancholy Ramblers. They played their usual collection of labor/love/peace songs and the soldiers from Fort Hood were moved by the love shown them by members of the audience. Bill Johns played a song he had written after meeting an infantry soldier on an airplane in the Mideast.

Finally, Shelley King, the Texas Musician of the Year, took the stage with her rockin-ass blend of R&B, southern rock, Texas swing and psychedelia and rocked our souls. Laura Beth took to the dance floor with all the Fort Hood soldiers and brought the place alive with her beauty, charm and grace. The soldiers were recognized by name and progressive Austin poured its love into their hearts. At the end of the night, an Iraq veteran took the stage and read the note he had submitted to his Top Sergeant three days ago announcing his spiritual awakening. He then ripped off his dogtags and announced, “I am a soldier no more!”

Sunday the Fort Hood soldiers came to the monthly meeting of our recently-resurrected chapter of Veterans For Peace and spoke gratefully about the Engagement Project. They pleaded with us to continue this work and promised to get us into the barracks for audiences with growing numbers of disgruntled, wounded soldiers. Cathy Doggett, the daughter of U.S. Rep. Lloyd Doggett (D, Texas) offered to help us to reach out with our message of love and responsible citizenry.

Joyce Pohlman spoke to us about the growing numbers of veterans on the streets of Austin whose lives have been destroyed by the current regime and who have been tossed aside and promised to help to connect us with them.

The Neil Bischoff chapter of Veterans For Peace became the Neil Bischoff-Utah Phillips chapter [legendary folksinger, VFP member and peace activist Phillips recently passed away] . The chapter is revived, we are engaged in the lives of active duty soldiers, and we are connected to each other in a new and deeper way on our prophetic journeys. Tomorrow we will return to the barricades near Fort Hood.

I’m grateful, beyond my wildest dreams.