Reasons to Redefine the Word "Murder" 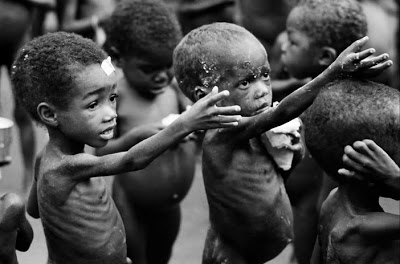 In parts of Burma before the cyclone hit the heat was so severe that you could walk around on a hazy day and run the risk of sunstroke.

On Thingyan the Buddhist holiday in which people dunk each other with water you could get a full-face full-pail drenching and be crisply sundried in minutes.

But when the storm water rose on the Irrawaddy Delta drying out became secondary because the sun’s rays were largely gone and so was much of the land, housing, and plantings.

No one really knows how many people died but the world press has made the point that it would have been far fewer if Burma had a better government.

The point could also be made, though, that far fewer still would have died if the world had a better system of producing and allocating its wealth.

It’s hard to come up with solid figures but it seems safe to estimate that the entire disposable wealth of the Irrawaddy Delta before the storm, that of its’ 3.5 million residents, could have been less than that of one table-full of diners at New York’s Four Seasons Grill Room.

Actually, it’s more dramatic than that.

Working with figures from Forbes magazine, the IMF, and the UNDP, it’s possible to estimate that there are between three hundred and a thousand individuals whose accumulated wealth is so vast that any one of them alone could pay each person in the Irrawaddy Delta for a year, and in the case of the richest, like Warren Buffett, could do it for six decades running and still have billions left.

One could get a visualization of this notion and its implications when flying over the Netherlands. Looking down from the Royal Dutch Airline a few weeks after Irrawaddy sank, you could see another delta, a country with much land below sea level, but where long infusions of wealth — much of it extracted from Southeast Asia by whip (see the histories of the Dutch East and West Indies Companies) — have made possible the building, behind strong dikes, by the sea, of nice, glassy homes and offices.

A cyclone Nargis would have killed anywhere — viz. the recent storms in the US midwest — but whether you survive a storm depends in important part on whether you and your ancestors were rich or poor and were able to build good infrastructure (even in the US, see New Orleans).

So the rich world is right to flagellate the Burmese generals for holding back resources as people die (a BBC World TV interviewer yesterday called it “criminal neglect”) but wrong to fail to note that they do the same thing daily, on a global, far more deadly, scale.

The rich do pass out some of their spare wealth during a cyclone or other covered crisis, but on a daily basis withhold enough of it such that 850 million people routinely go hungry.

The recent food price hike has upped that statistic by perhaps a hundred million, and so it is said that we are in a “food crisis” and that “the era of cheap food is over.”

The world would indeed be in a food crisis if there were not enough food to feed the people. But that is not the case.

The problem is that many millions of people can’t afford food. That, clearly, is not a food crisis, but rather a wealth crisis, more precisely a wealth distribution crisis that can be solved by shifts from rich to poor, and a crisis that can be kept from recurring if laws and economies are then modified to institutionalize a new, more realistic, system that doesn’t happen to starve people — an objective which, one would think, is a fairly modest, and perhaps popular, goal.

Today in Rome there is a world summit on food and there has been a political stir over an attempt to exclude Robert Mugabe, Zimbabwe’s liberator and despot.

The point is made correctly that Mugabe runs a failed economic system that kills many people who could have been saved if he had made different choices.

But the same could also be said of a number of others at the summit — those who run the world economy –, which is certainly failed from the point of view of those who draw their last breath hungry.

UN people from FAO (Food and Agriculture Organization) and other agencies have also caused a flutter by talking about $50 billion, over many years, for various food projects, which is a tenfold increase but still less than the personal holdings of Buffett, Bill Gates, and Carlos Slim, who got quite rich essentially overnight when Mexico gave him its cell phone system. It’s also what the US goes though in about five months of occupying Iraq, where child malnutrition has risen in rough correlation with precision bomb drops and Iraqui democracy.

If someone’s dying and you have a dollar that could save them and you withhold it, you have killed them. It’s so extreme it sounds ridiculous, but it happens to be true, and will continue to be true so long as surplus coexists with bodies living on the cliff of death, or, for the luckier young ones, the cliff of mere body stunting and underdevelopment of their brains.

The big story before the food crisis was the US Wall Street financial crisis. For some weeks sober economists were fearing 1929-style panic. But Ben Bernanke, the US Federal Reserve chairman, stepped in to save the day by essentially imagining into existence several hundreds of billions of dollars worth of money that was effectively made available to some of the world’s richest institutions and people.

The coverage focused on the fact that Bernanke did this cleverly, and succeeded, but it could also have noted that this is a remarkable aspect of today´s economy: while most people have to work for their money incrementally, bending in mud to plant their rice, a few can imagine it into existence in large blocks, and give it to their friends and colleagues.

By printing money, issuing bonds, making loans, creating new financial instruments, and by other means, these few create notions that have the power to buy goats, or anything else one wants, and can continue doing so indefinitely so long as rich society buys the pretense.

Which is to say that though, say, getting food to people, requires rearranging some physical things, most of the task involves rearranging the notions that govern actions from people’s heads.

It´s simply a choice as to whether the power to conjure funds will be used for hungry people, and not just the juridical, imaginary persons that are investment corporations (US judicial precedent gives corporations the legal rights of persons, but like persons become ghosts it´s impossible to jail them if they transgress).

And it is likewise simply a choice whether or not to save expiring people by allowing resources to be shifted from an aid ship off Burma´s shore, or from the guys having drinks and lunch at the Four Seasons, table four.

Allan Nairn writes the blog News and Comment at http://www.newsc.blogspot.com/.

This entry was posted in RagBlog and tagged Global Economy, Social Action. Bookmark the permalink.