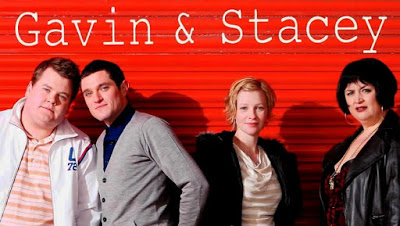 Englishman James Corden and Welshwoman Ruth Jones wrote and performed in one of the freshest, wackiest TV comedies in years: the award-gobbling, Anglo-Welsh sitcom Gavin & Stacey

In the wildly popular, extremely hilarious romantic/family Britcom Gavin & Stacey, twentysomethings Gavin (Mathew Horne) and Stacey (Joanna Page) fall in love and marry, but they have to cope with bizarre friends and family who all have strong opinions about their love life.

Their chubby, highly unusual best friends are brilliantly played by the series’ shockingly original co-authors James Corden (Smithy) and Ruth Jones (Nessa). The terrific cast includes Alison Steadman (winner of two major awards for the wonderful 1990 Mike Leigh film Life is Sweet) as Gavin’s mum Pam and Rob Brydon (15 awards and noms for various works, including 2011’s The Trip) who virtually steals the show in each of the 20 episodes as Stacey’s earnest, eccentric Uncle Bryn.

Gavin & Stacey ran for three seasons and a Christmas special, from May 13, 2007, to January 1, 2010. Gavin, his parents, and Smitty live in Billericay, in Essex, England, where half of the episodes unfold, while Stacey, her mother, Uncle Bryn, Nessa, and a randy old neighbor lady live on Barry island in Glamorgan, Wales — where the other half erupt.

The series was nominated for 25 major British awards (12 for Jones, 11 for Corden, two for Brydon and one each for Page and Horne). It won 11, including Best TV Comedy, Best New Scripted Comedy, Most Popular Comedy Programme, Best Comedy/Entertainment, Best Satellite/Digital Programme and Best Comedy Series — plus the Writers’ Guild of Britain’s Best Television Comedy/Light Entertainment.

If you have any difficulty with the Welsh and English accents, closed captioning in English makes them clear, and also allows you to back up and hear/read the quicker or more unexpected lines again.

The theatrical high point of 2012 for me was seeing Corden’s tour-de-force performance on Broadway in The National Theatre of Great Britain’s One Man, Two Guvnors, for which he won the “Best Actor in a Play” Tony award — beating out James Earl Jones, Philip Seymour Hoffman, Frank Langella, and John Lithgow!

I once wrote a major article for Hollywood Reporter on why Britcoms were far superior to American sitcoms. One reason: their writers assume their audience is smarter and write more intelligent and surprising scripts. Second: Most British comedy series are only six or eight episodes long, so the original genius writes them all and the quality is consistently high. (John Cleese and Connie Booth wrote every gem-like episode of Fawlty Towers, for instance.)

But U.S. TV comedies are 22 or 23 episodes long, so the original writer does four of them, the producer’s mistress writes three, and the network executive’s idiot nephew pens three more.

I confess that I haven’t really liked a U.S. sitcom since 1992 (Cheers and Night Court), whereas I have adored lots of Britcoms, including Blackadder, The Thin Blue Line, Not Going Out, The Vicar of Dibley, Fawlty Towers, Are You Being Served?, Absolutely Fabulous, League of Gentlemen, As Time Goes By, and Gavin & Stacey.

This one is a real treat; it’s available via Netflix and YouTube and I recommend it (and the others in the previous list) very highly.

Here’s a bit from One Man, Two Gov’nors.