Alan Waldman : ‘Last of the Summer Wine’ Has Kept Millions Laughing for 37 Years 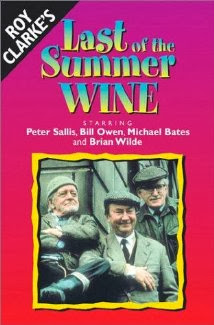 British national treasure, Roy Clarke, created and wrote all 295 episodes of this droll series about three elderly Yorkshiremen with too much time on their hands.

Last of the Summer Wine is a beloved Britcom that millions in the U.S. and around the world — including my first three wives and I — enjoy watching over and over again.

Running from 1973 to 2010, it aired 295 howlarious episodes, which many PBS stations (including mine) run repeatedly. Britain’s longest-running sitcom received five BAFTA nominations for “Best Situation Comedy Series,” the UK National Television Awards’ “Most Popular Comedy” honor and four other noms.

It was extremely popular, drawing up to 18.8 million British viewers. More than 28% of viewers polled at imdb.com rated it 10 out of 10. The show ranked #14 on the high-profile 2004 poll for Britain’s Best Sitcom. It is the favorite program (seriously) of Britain’s Queen Elizabeth and Afghanistan’s President Hamid Karzai.

Last of the Summer Wine has aired in more than 25 countries and is the longest-running sitcom in the world. It mostly follows the comic misadventures of a trio of older men and their youthful antics. The cast has changed several times over the years.

Until his death in 1999, Bill Owen delighted audiences as scruffy, childlike, love-struck, ferret-raising Compo Simmonite. Throughout the series, Peter Sallis (the voice of Wallace in the Wallace and Grommit films) played meek, easily frightened Norman Clegg.

The third role was filled alternately by Michael Bates as authoritarian and snobbish Cyril Blamire, Brian Wilde as quirky, phony war hero Walter “Foggy” Dewhirst, Michael Aldridge as eccentric inventor Seymour Uttherthwaite and universally adored Frank Thornton (who just recently passed away and who was a huge hit in Are You Being Served?) as dry-witted former police officer Herbert “Truly of The Yard” Truelove.

In recent years, as Sallis and Thornton became too old for all the physical tomfoolery, they were limited to a scene or two, while a new group of miscreants took over the major folderol. They were Bert Kwouk (Peter Sellers’ hilarious sidekick Kato in the Inspector Clouseau films) as washing machine salesman Entwistle; Owen’s son Tom Owen playing Compo’s unkempt, impecunious, bill-collector-dodging son, Tom Simmonite; Keith Clifford as Billy Hardcastle who believed himself a descendent of Robin Hood; Brian Murphy as Alvin Smedly and Russ Abbott as Luther “Hobbo” Hobdyke, a former milkman who pretends to be a secret agent.

There is a long-running gag plot as Howard (Robert Fyfe) tries incessantly to fool his wife Pearl (Juliette Kaplan) as he goes on trysts with bleach-blonde, former sexpot Marina (Jean Ferguson), but something always goes amiss. Marina is one of my two favorite characters, along with tall, miserable Smiler (Stephen Lewis).

There are lots of other funny characters. One is Auntie Wainright who runs an antique shop and is extremely greedy/cheap. Another is Compo’s love interest Nora Batty, the most delightfully ugly woman ever, who rejects all his crude advances, often with a broom or bucket of water. Another great running-gag character is Danny O’Dea as nearly blind Eli. There are also two inept, crime-avoiding cops in a police car.

While a silly, slapsticky comedy, the series has great fun mocking the British class system. It is quite funny in a very gentle way.