Richard Roxborough is a seriously flawed barrister who represents criminals accused of ridiculous crimes, ranging from cannibalism to cutting off a neighbor’s weenie with garden shears. 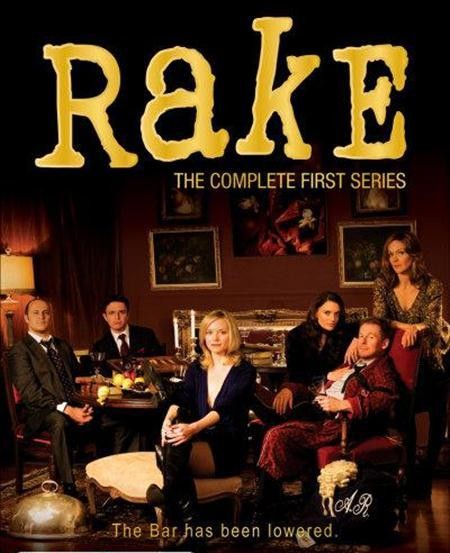 [In his weekly column, Alan Waldman reviews some of his favorite films and TV series that readers may have missed, including TV dramas, mysteries, and comedies from Canada, England, Ireland, Australia and Scotland. Most are available on DVD and/or Netflix, and some episodes are on YouTube.]

Rake is a very clever and audacious Australian legal comedy-drama that ran for four seasons (2010-2014) Down Under. The first two seasons (16 episodes) are available on Netflix Instant streaming, including this one.

Cleaver Greene (Roxborough) is a brilliant, driven attorney who’s also an ex-druggie, a current gambling addict, a serial seducer, a tax cheat trying to duck a lawsuit, and a barrister hated by many of his his colleagues. 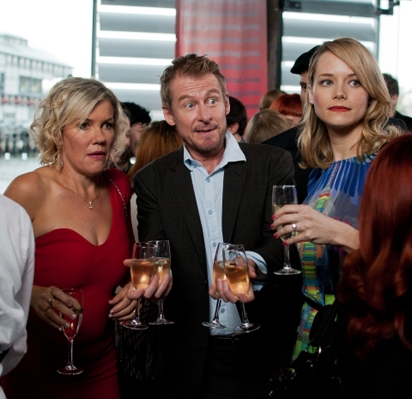 Aussie lawyer Cleaver Greene with two of his many women.

All episodes were written by Andrew Knight or Peter Duncan. The series was created by Knight, Roxborough and Charles Waterstreet, the flamboyant Sydney barrister on whose career the program is loosely based. The writing is consistently very witty.

The cast is very colorful and fun, although the gifted actors are all unknown here.

They play characters including Cleaver’s instructing solicitor and best friend, whose wife Greene is screwing; an ex- prostitute he falls for who later pens a successful tell-all book; his shrink ex-wife, with whom he’s still very close; their teen son who has a penchant for bedding older women, including his English teacher; a corrupt Attorney General who hates and plots mischief against Cleaver; a big gangster’s wife who takes over the crime syndicate and seeks to collect Greene’s huge gambling debt in bed—and many more.

This is a highly original series, quite different from what we are used to in the Northern Hemisphere. The series aired in the United States on DirecTV’s Audience Network, and Fox has commissioned an American version, starring Greg Kinnear.