Joining in the patriotic frenzy with Evo Morales, goose-stepping soldiers, lots of white paint… and, oh yes, the marching bands… 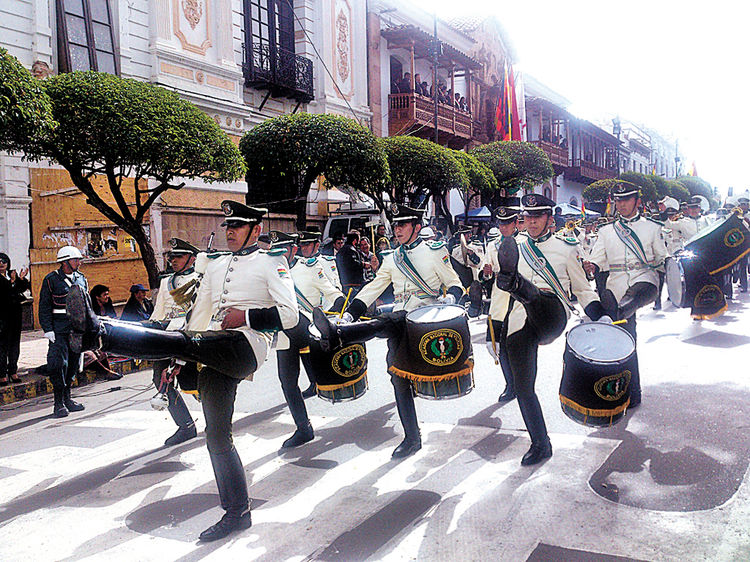 Police marching band does a little goose-stepping on Independence Day in Sucre. Photo from La Razon.

SUCRE, Bolivia — Independence Day in Sucre was the most electrifying day in the Andes since Cochabamba doctors — armed with rocks and in full white-coat-stethoscope regalia — hurled themselves into street battle against the police and the police hurled their computers into bonfires and burned down their own stations.

Preparation for the grand event celebrating the Grito de Libertad began weeks in advance when workers of this White City set up scaffolding for the annual re-whitening of the Casa de Libertad in Plaza 25 de mayo. The paint businesses on Avenida Jaime Mendoza then realized their raison d’être as every home-owning Sucreño within 10 blocks joined the effort to repaint their façades white.

But that wasn’t all. In the week before, the other business to bolster its bank account from the patriotic frenzy — that of scaffolding assembly/disassembly — went into high gear to construct and deconstruct platforms and tiered seating for the outdoor concerts, fashion shows, and information tents that would whip up anticipation before the arrival of the Big Day.

25 de mayo 1809. Said Big Day is the moment in history when independence from their colonizers was declared — right here in Sucre — and the true inheritors of this Andes terrain began their long journey toward post-Inca, post-Spain nation-statehood. The Casa de Libertad, often termed a sacred place, is the gloriously white colonial building where the country´s first congress was held, Sucre was named the capital of Bolivia, the Declaración de Independencia was written and signed, and the first Bolivian flag was raised. Its place in history today is as a museum honoring the heroism of past paisanos, most notably Juana Azurduy de Padilla, and a backdrop for such cultural events as guitar concerts and rites-of-passage for dignitaries. 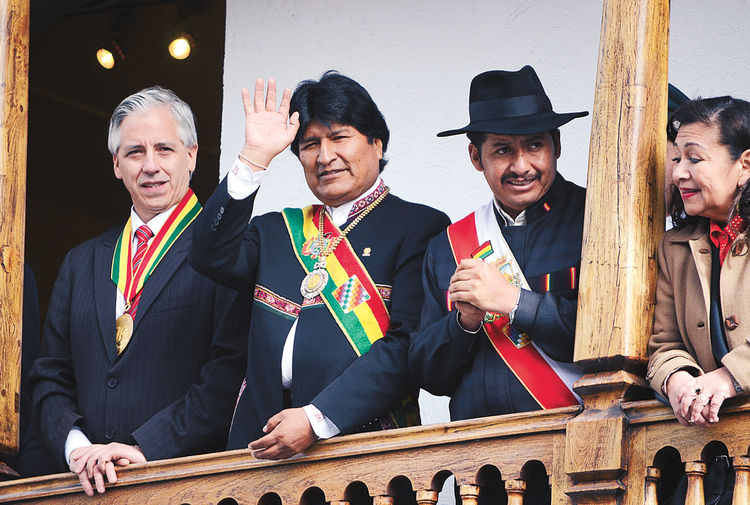 The corner of Aniceto Arce and Hernando Siles, where I am staying, is the appointed gathering place for marching bands, neighborhood associations, and worker syndicates who will parade by the Casa de Libertad, and so I had to muscle my way through the heaving crowds of campesinos and trabajadores to arrive at the plaza. Vale la pena, I say, because after scooting up Calle España, I found myself standing in the second row of a mass of excited Bolivians smack in front of the Casa de Libertad; upon the newly-restored balcony above stood President Evo Morales in his tri-color sash and el Vice Álvaro García Linera festooned in the gold medallion of Simón Bolivar.

Evo waved at comrades he picked out in the crowd below. The men and women of the armed forces made their dramatic display for the Mandatario next. The army! The air force! And yes… the navy. The navy is a special story as Bolivia lost claim to its Pacific Ocean ports between 1879 and 1883 when neighbor Chile pilfered them, as the story is told, at the moment that every Bolivian soldier was plastered on the homemade corn liquor known as chicha in celebration of Carnaval. 135 years later, the outrage remains El Numero Uno unresolved issue that every president — dictator, liberal, or socialist — reinserts into national consciousness to win friends, influence people, and bolster emotions for the nation-state.

Still, after all these years since that first grito, a country that is actually made up of 30-something historically separate Native groups, only truly launched its expedition toward the political identity of a nation-state during the 1932-35 Guerra del Chaco against Paraguay.

The dynamic between decentralization and centralization is as present now as it was when the Inca roved across the altiplano with big-time plans for amalgamation on the tips of their tongues and spears; it manifests itself as debates about the meaning of the 2009 renaming of the country as Estado Plurinacional de Bolivia, about the weight of power among the Palace in La Paz, the nine departments, and the village-communities; about the nature of responsible development in a world going to ecological hell in a hand basket. 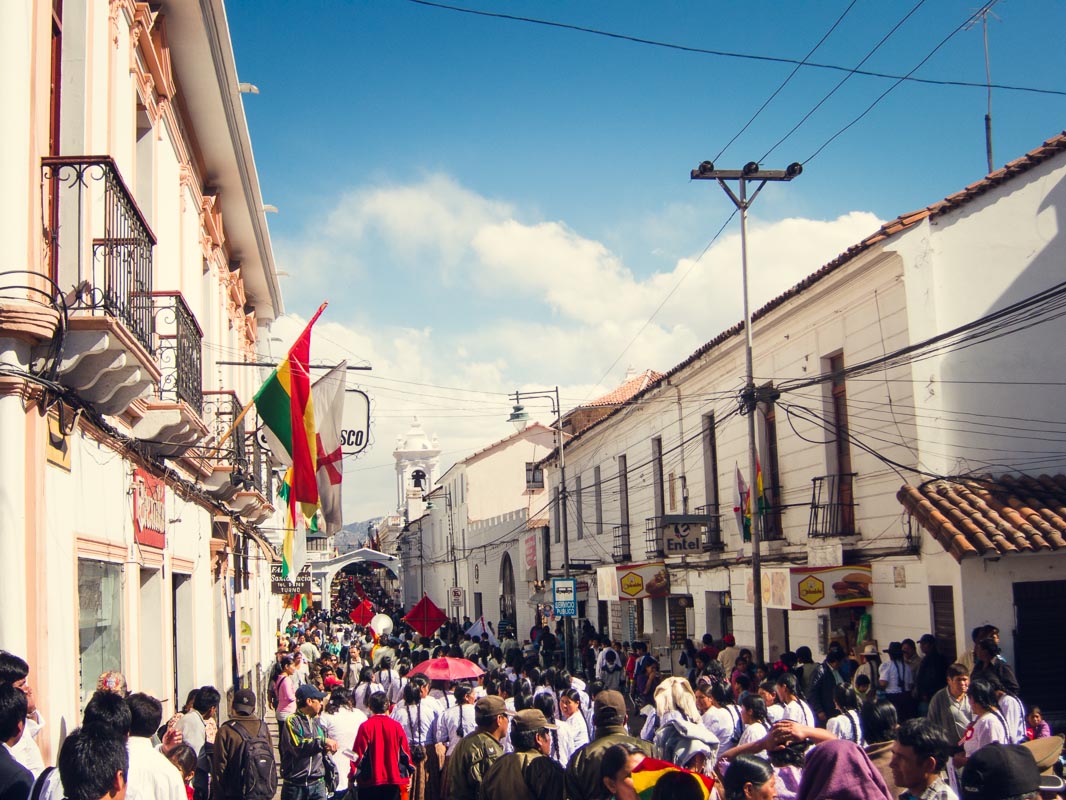 The government of Evo Morales is all about building nationhood. One can sympathize even while raising an eyebrow. To protect one’s country in a world of unprincipled power plays via infiltration, electronic surveillance, dirty wars, assassinations, and weapons of mass destruction, to become a serious player in the global economy — these seem to require militaristic/economic potency.

Ergo: the rush to industrialization via humongous dams and mines, international airports, super-highways, satellite communications, nuclear power plants, etc. Ergo: the Inca-based state rituals in dramatic locales like the ruins at Tiwanaku. These government-sponsored health, food, and services fairs in the plazas of the country´s cities in which the governmental dream of nationhood is disseminated and bused-in campesinos stand in neat lines to get their first taste of yogurt (Bolivians do not stand in neat-or-otherwise lines). Ergo: the state-run media venues. The cult of Evo. The winning-over of the military and police via channeling monies for modern equipment and better salaries. And these marching-band parades…

The history of Prussian-German goose-stepping in Bolivia goes back to the hiring of the German General Hans Kundt in 1911.

The history of Prussian-German goose-stepping in Bolivia goes back to the hiring of the German General Hans Kundt in 1911. Previously the French had been installed to teach the armed forces how to organize and arm itself, fight a decent war, and quell the inevitable citizen or military uprisings. Their looser approach was so popular that when Kundt arrived, some soldiers refused to change from their French uniforms to the German. The Germans goose-stepped. And here we are in 2014 — and the army, air force, and navy are flinging their pointed toes above their moustaches as they pass beneath the sash and medallion of their Mandatario and his Second-in-Command.

The coming election, slated for 12 October this year, will be telling. Evo is running despite legal criticism that a third bid is unconstitutional, and just about everyone agrees he will win due to falta de a better candidate. In the last nine years of his rule there have been serious jolts like creeping-toward-top-level corruption within both administrative and judicial systems; Gasolinazo when García Linera threatened an immediate 80% rise in gasoline prices; unresolved legal cases like the 2009 Hotel Las Américas execution-style murders of a cadre of secessionists; the constant eating away at freedom of expression/press via state buying-up of media venues and laws making it easier to close independent media down; plus Chaparina when the police gassed, beat, and attempted (unsuccessfully) to disappear an encampment of peaceful indígenas marching to save their eco-reserve and land-based cultures from highway development. 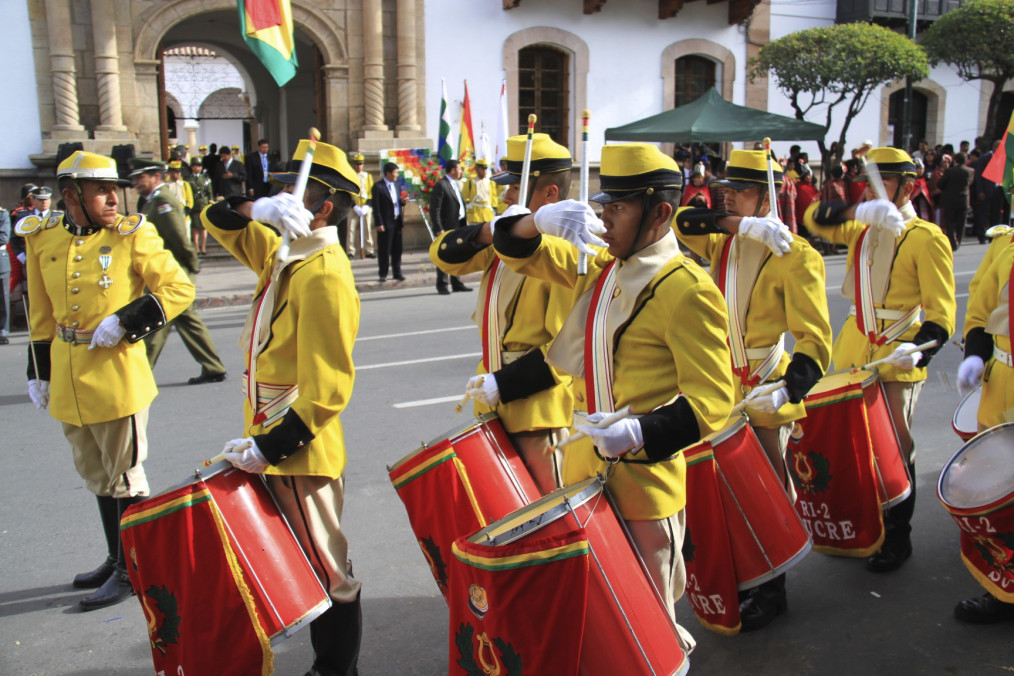 And then… the marching bands. Image from notesfromcamelidcountry.

Too, some Bolivians blame the Palace for skyrocketing cocaine production and galloping inflation, which in reality are global trends. But just about everyone agrees that un proceso de cambio from decades of “Goni” Sánchez de Lozada, García Meza, et al. is necessary.

25 de mayo 2014. After four years living in Bolivia, I have discovered that my name is Chellis and I´m a marching-band addict: once they start, like a never-satisfied cocaine addict, I can go on for six hours. It´s Independence Day and the bands play on.

This article was also published at CounterPunch and was cross-posted to The Rag Blog by the author.

[Chellis Glendinning lives in Sucre, Bolivia. She is the author of Off the Map: An Expedition Deep into Empire and the Global Economy, When Technology Wounds, and other books. Her latest is HYPER: An Electromagnetic Chapbook. She can be reached via  her website, www.chellisglendinning.org. Read more of Chellis Glendinning’s writing on The Rag Blog.]