This fight didn’t start in a courtroom and it will not end there. 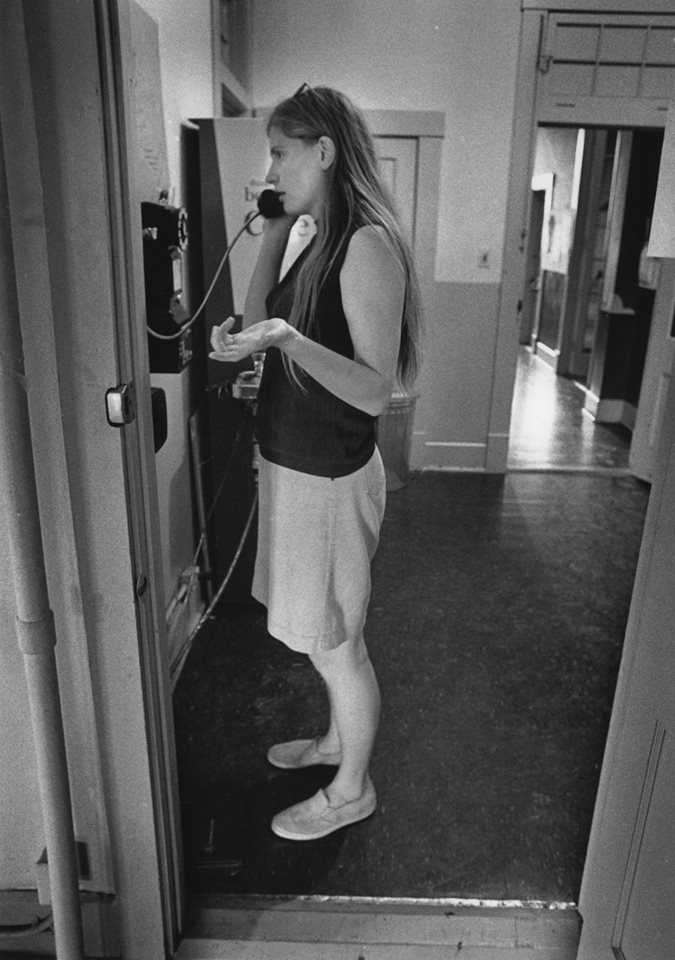 Judy Smith gives abortion advice on a pay phone outside the Rag office. Photo by Alan Pogue / The Rag.

AUSTIN — The Supreme Court decision was telegraphed on May 1st and moved across the weeks like a slow motion train wreck to the announcement on June 24 that Roe v. Wade has been overturned. The leak, seeping like an oil spill, is a stain on rights secured by courageous Texans nearly 50 years ago.

My daughter told me the news. I looked at my granddaughter, just shy of nine-months-old, and thought about her future as a post-Roe baby. I felt the dull edge of sorrow.

I have talked with many of the women who were on the front lines of this fight decades ago. Bobby Nelson, a feminist friend, helped with the legal research for Roe v. Wade as Sarah Weddington prepared the case. She also helped with a 1971 hearing at the Texas Legislature on abortion. Sarah Weddington gave Bobby bound editions of the Supreme Court testimony. In May, Bobby told me, “I’m glad Sarah died before this happened.” Every time I remember her words, tears well up.

What everyone needs to know is that this fight didn’t start in a courtroom and it will not end there.

The deep well of emotion I feel is laced with anger.

The deep well of emotion I feel is laced with anger. That alchemy of anger is familiar magic. I felt it when I decided to write for an underground newspaper rather than just type copy.

Last night, I watched The Janes on HBO. It is a remarkable account of the young women who organized an underground network in Chicago to meet the needs of women desperate for safe and affordable abortions. The courage of the Janes was mesmerizing. Several were arrested in 1972. Their charges were dismissed when the Supreme Court decision came down on January 22, 1973, making abortion legal.

I’ve been thinking what to say to younger women and allies engaged in this struggle now. They are equally courageous. They are fierce advocates for abortion as healthcare. Their network is nationwide. In Texas, they have funded trips out of state. They have given out emergency contraception. They connect people with information about safe, self-managed abortion via Plan C abortion pills. I want those younger women to know the backstory to Roe v. Wade. Magic began there.

It is a Texas story documented in a book I co-edited, Celebrating The Rag: Austin’s Iconic Underground Newspaper. When we had a final draft of the book in 2016, I contacted Sarah Weddington to request a book blurb. I delivered a copy of the draft in a three ring binder to her house.

The book blurb she wrote tells this uniquely Texan story.

Those of us who treasure reproductive rights owe a great debt to Ragstaffers. At a time when the U.T. Health Center would not provide contraception or information about avoiding pregnancy, Judy Smith, Bea Durden, and Victoria Foe started the work of collecting information about contraception and disseminating that information in The Rag and women’s consciousness-raising meetings. As questions about abortion came up, they were the key people (with help from other Ragstaffers), investigating the subject of abortion and finding good places to refer people for medical services and the bad places people should stay away from. They were the people most likely to be on the telephone answering calls for information, sometimes arranging transportation for people to get to providers, and, when needed, helping to organize necessary funds.

After Judy’s “special guy” Jim Wheelis started at the U.T. School of Law where I had graduated and was then working, we were joined one morning in the snack bar there by Ron Weddington, another law student. Judy talked me into volunteering to file a lawsuit against the Texas anti-abortion law; Jim and Ron enthusiastically agreed to help with research and encouragement. Barbara Hines, a U.T. law student, was most helpful in preparing the documents in the case. That coffee meeting was the beginning of Roe v. Wade, the case decided by the U.S. Supreme Court on January 22, l973, which overturned the anti-abortion statute in Texas and, by extension, throughout the U.S.

YEAH for those Ragstaffers and the others who made major contributions!

Sarah Weddington, Attorney who argued and won Roe v. Wade and author of A Question of Choice

I was not at the center of this story, but I have written about it frequently. When I returned from New York to Austin in late 1969, I found the movement community and The Rag newspaper transformed by some very bold feminists. These feminists had begun to re-shape leadership, consciousness, and content at The Rag newspaper. I believe the paper’s embrace of feminism accounts for The Rag’s remarkable longevity (1966-1977).

They published a phone number for their center in the paper. It was the number of the pay phone in the hallway.

Judy Smith, Barbara Hines, Bea Durdin, and others had started a Birth Control Information Center in the Rag office, literally claiming space for a small room. They published a phone number for their center in the paper. It was the number of the pay phone in the hallway. In a film version captured by Peoples History in Texas, Judy talks about answering that hallway phone and hearing the “click…click” that indicated a tapped line.

Birth control information was not easily available, so these women began by addressing that need: what worked, what didn’t, how to get prescriptions for pills. Soon they were receiving desperate calls about unplanned pregnancies. They turned their attention to the issue of abortion and began to research where you could obtain a safe abortion at a reasonable cost. They found such a place across the border in Mexico.

They were assisting with information and sometimes travel, but they knew they might face legal repercussions in Texas for doing this work. At that time, Judy Smith was a University of Texas graduate student in the sciences and her partner was studying law at UT. As Sarah wrote, they approached her in the law school cafeteria. Judy, who could be very persuasive, talked Sarah into filing a lawsuit.

The story that we all need to remember is that the work the women took on in Chicago and in Austin didn’t begin in a courtroom. Women and their allies educated themselves about options. While the Texas women did not perform abortions as the Janes did, they answered desperate phone calls, and they provided much-needed information on safe birth control and safe abortions. Sometimes they provided material support and travel assistance. They organized to meet needs. Those needs do not go away when four men and one woman on the Supreme Court overturned fifty years of legal access to abortion.

Demonstrate, organize, and vote. For Judy Smith and the Janes, consider making a contribution to the National Network of Abortion Funds.  These funds are on the front lines of this fight and they are answering the calls.

The fight didn’t start in a courtroom. It doesn’t end there.

[Alice Embree is an Austin writer and activist who serves on the board of directors of the New Journalism Project, is associate editor of The Rag Blog, and was a founder of The Rag, Austin’s legendary underground paper, in 1966. Alice’s memoir, Voice Lessons, was published by the Dolph Briscoe Center for American History and distributed by the University of Texas Press.]