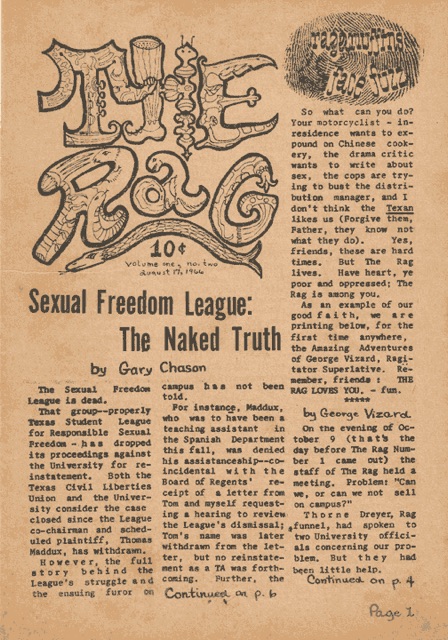 In 2016, former staffers held a reunion to commemorate the 50th anniversary of Austin’s pioneering underground newspaper, The Rag. We published Celebrating The Rag: Austin’s Iconic Underground Newspaper at that time. The book has been used in several University of Texas history classes and prompted a number of student inquiries.

A recent question from a UT journalism student sent me on a quest for more information about The Rag’s journey to the US Supreme Court.

George Vizard and others sold the first issue of the paper on the campus, facing down UT administrative demands that they cease and desist. In the second issue of the paper (October 17, 1966), Vizard recounts his escapades with campus cops and administrative officials. The outcome was that he sold out all the newspapers he had from that first run. 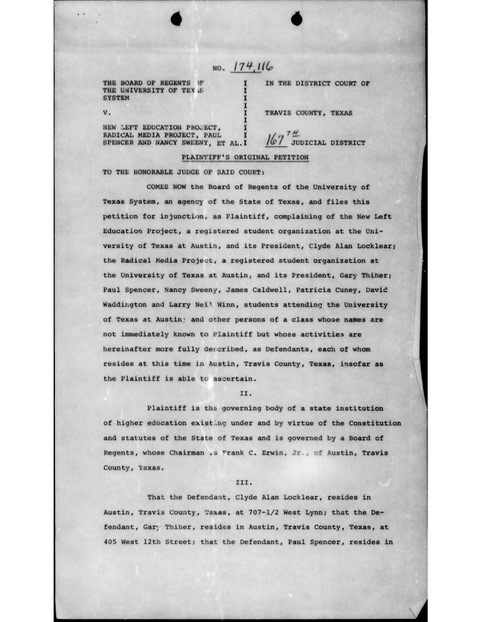 On July 8, 1969, the UT Board of Regents sought and got an injunction in state court to prevent sales of The Rag on campus. The Rag famously defied structure, so the Regents named the New Left Education Project, the Radical Media Project, and eight individuals as the plaintiffs in their suit in state court. Determined to discover who had been named as individuals, I kept expanding an e-mail conversation with likely suspects.

Some could not remember whether they had been named. Some recounted stories of the New Left Education Project. An attorney shared a memory of court testimony; another attorney provided a blow-by-blow account of the legal proceedings as they shifted from state to federal jurisdictions.

I re-read The Rag’s account of the case (with an error regarding the number of individuals) and David Richards’ chapter on his legal defense in his book, Once Upon a time in Texas: A Liberal in the Lone Star State. I finally got a scanned copy of the pleadings for injunctive relief from the Travis County Archives Repository. For the record, the eight individuals named were: Clyde Alan Locklear, Gary Thiher, Paul Spencer, Nancy Sweeny (as named in the lawsuit), James Caldwell, Patricia Cuney, David Waddington, and Larry Neil Winn.

With considerable assistance from former Ragstaffer Doyle Niemann who had become an attorney and state legislator, here is a blow-by-blow account of the legal journey prompted by the UT Regents.

After the Regents obtained an injunction from a state court, David Richards filed a counter suit in a federal court that decided that the case should be heard by a panel of three judges. The three-judge panel then decided the case against the Regents, finding that their rules were overly broad and infringed on protected rights. The Regents appealed to the US Supreme Court, which decided that the three-judge District Court panel was not appropriate and referred the case back to the federal District Court for action. A single judge in the federal District Court again sided with Richards and reissued the ban on the Regents rules. The Regents appealed that decision to the federal Circuit Court, arguing that they had revoked the offensive rules in the meantime, but they lost once again, leaving in place Richard’s victory. 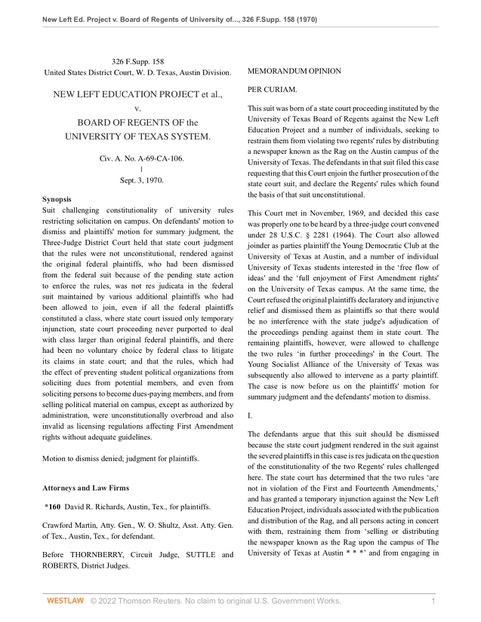 I particularly loved a description of a state attorney’s attempt to besmirch the New Left Education Project. Jim Wheelis, a retired judge, remembered the initial arguments in federal court in response to Richards’ countersuit.

A Texas assistant attorney general argued that the New Left Education Project was a sham, that it was just individuals pretending to be a separate organization. Had this argument succeeded, it would have meant that the matter had to proceed in state courts.

Homer Thornberry, the court of appeals judge on the panel, brushed that off, and later when the state attorney objected to the admissibility of a number of documents, Wheelis remembers Thornberry’s response delivered in a wonderful rolling voice. Thornberry just said, “All exhibits are admitted for all purposes.”

Naturally, The Rag bragged about its Supreme Court victory, even though the Court had not really addressed the Regents’ rules themselves. Justice William O. Douglas had rightly dissented from the Supreme Court’s overly technical opinion, noting the free speech issues involved. And we all know that The Rag continued throughout its many years (1966-1977) to sell the paper on campus and across the street from the campus, undeterred by the UT Board of Regents and the UT Administration.

A version of this article appeared in collectiveimpressions.

[Alice Embree is an Austin writer and activist who serves on the board of directors of the New Journalism Project, is associate editor of The Rag Blog, and was a founder of The Rag, Austin’s legendary underground paper, in 1966. Alice’s new memoir, Voice Lessons, was published by the Dolph Briscoe Center for American History and distributed by the University of Texas Press.]

This entry was posted in RagBlog and tagged Alice Embree, George Vizard, Texas Board of Regents, The Rag, U.S. Supreme Court, Underground Press. Bookmark the permalink.