Students and the public are making their voices heard at forums on the UT campus. 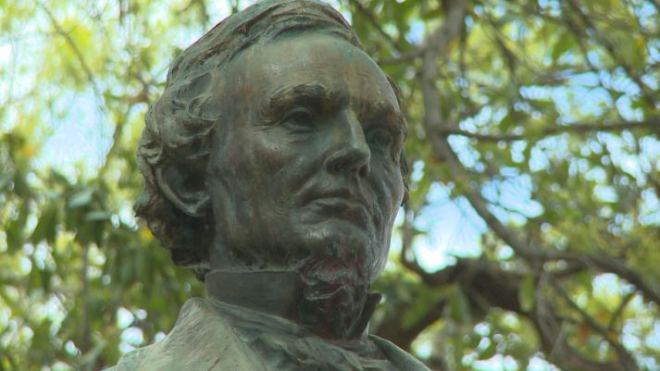 Jefferson Davis looks over the UT-Austin campus. Image from KXAN-TV.

AUSTIN – – Under pressure to remove Confederate statues from the University of Texas at Austin Main Mall, UT-Austin President Gregory L. Fenves has appointed a panel to gather input and deliver recommendations by August 1, 2015.

Public input can be given in person at the next public forum on Wednesday, July 15. Speakers must sign up between 2-3 p.m. before the hearing. Comments can be provided online here, or by calling 512-471-3183. The last day for public testimony is July 15.

The first of two public forums was held on Tuesday, July 7. The following is taken from remarks I made at that event.

I have a lifelong association with the University of Texas at Austin. My father joined the faculty of the College of Education in 1948 when I was two years old. I was raised in Austin’s segregated schools until Brown v. Education resulted in token integration of University Junior High and Austin High School. I was a freshman at the University in 1963. Southwest Conference Sports and dormitories were still segregated.

The civil rights movement had begun to change my generation’s idea of the possible with lunch counter sit-ins in Greensboro, North Carolina. My father campaigned with an interfaith group to integrate Austin restaurants. There was a swim-in at Barton Springs, stand-ins at university area movie theaters.

My first semester at UT, I joined a civil rights group and picketed in front of Kinsolving Dorm in December. It was after the assassination of Kennedy. Our signs read: “Justice Delayed is Justice Denied,” and “The President’s Daughter Lives in Segregated Housing.”

I finished the B.A. I had started in the ’60s and got a Master’s Degree from UT-Austin in 1987. But, much of my real education came through peace and social justice movements I feel fortunate to have been part of.

We live in a region with a deeply embedded culture of racism. Its vestiges may be so commonplace that as white people, they must be pointed out to us. The slaughter of nine members of Charleston, South Carolina’s Emanuel Church opened our eyes. The alleged shooter had wrapped himself in symbols of the South’s racist past and present. It has taken tragedy to make us pay attention to these racist symbols.

As an alumni and community member, I urge the University to heed the words of Martin Luther King, Jr. “The arc of the moral universe is long, but it bends towards justice.” It is time to bend toward justice and take down the Confederate statues.

The Jefferson Davis statue is the most prominent Confederate statue on the UT-Austin campus, but there are others. A “six-pack” of statues between the UT Tower and Littlefield Fountain also includes Confederate figures Robert E. Lee, John H. Reagan, and Albert Sydney Johnston.

The majority of public testimony was in favor of taking the statues down – African American students and faculty. Please make your voices heard in the public forum, online, or by phone. There is also a petition being circulated here.