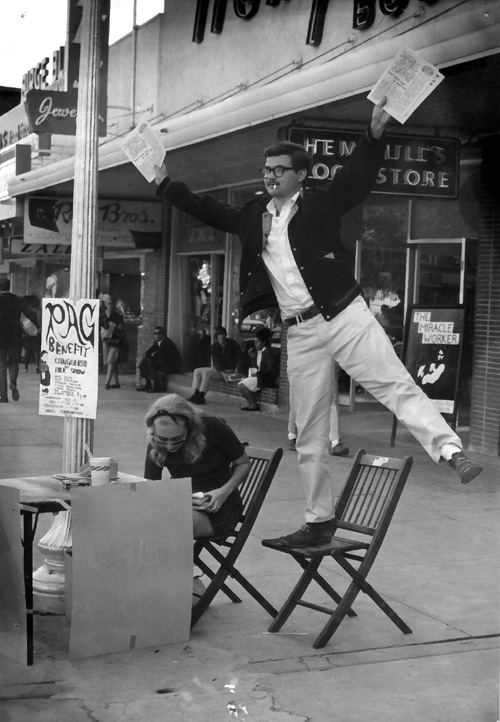 Rag Blog associate editor Alice Embree wrote the following article — about the life and murder of original Ragstaffer George Vizard — for a book that will be released this October in conjunction with a 50th Anniversary “Rag Reunion and Public Celebration” of Austin’s historic underground newspaper, The Rag, that published from 1966-1977. The Rag has been reborn into the digital age as The Rag Blog, with many original Ragstaffers involved in the paper’s online resurrection, including George’s widow, Mariann (pictured above), who later changed her last name to “Wizard.”

The Rag Reunion (“50 Years and Still Raising Hell”) takes place October 13-16, 2016, in Austin, and will include exhibits, presentations and discussions, parties, a Gentle Thursday reunion, a concert at the iconic Threadgill’s restaurant and music venue, and much more. Learn more about it on our Rag Reunion page. The yet untitled book will include more than 100 articles from the original Rag, accompanied by lots of iconic art and photography, including work by artists Jim Franklin and Gilbert Shelton and photographer Alan Pogue, as well as several contemporary essays reflecting on the history and impact of the paper.

This is the first of several articles, to be published in the Rag book, that The Rag Blog will post over the coming weeks leading up to the October happenings.

When George Vizard was murdered on July 23, 1967, I lost a friend and comrade. George was part of The Rag from the beginning. These words of tribute and remembrance have been written with the help of Mariann Wizard, George’s widow. I hope this corrects a deficit in The Rag’s coverage. The Rag never acknowledged George’s contributions to the Austin left and to the newspaper, and never reported on his death.

George, born in 1943, was raised in San Antonio along with his brother, Austin musician Ed Vizard. He attended San Antonio College before transferring as a junior to UT-Austin in the fall of 1964. In the three and a half years he lived in Austin, he played a major role in the battles for racial justice and free speech, and an end to the war in Vietnam.

Although my parents lived in Austin, I was living on campus in the fall of 1964. I would occasionally join my parents at All Saints Episcopal Church, returning home with them for Sunday dinner. I was surprised to see George there at a church service. He was serving as an acolyte — technically a crucifer — carrying the cross. Much later, I learned he had considered becoming a priest.

Since I knew him from civil rights meetings and demonstrations, my parents invited him to dinner. George was the kind of person your parents wanted you to bring home. He didn’t sit behind a newspaper speaking only when spoken to. He engaged easily with my family. Mariann said he won her mother over when, at the sound of her car in the driveway, he jumped up to help bring in the groceries.

George was serious about politics, but he wasn’t a dour, droning politico.

George was serious about politics — so serious he later joined the Communist Party — but he wasn’t a dour, droning politico. He had a playful side. He sometimes read to audiences from Winnie the Pooh at Ichthus Coffeehouse. When Mary Poppins opened at the Varsity Theatre in the fall of 1964, George and I stole away from the Student Union Chuck Wagon — where members of Students for a Democratic Society (SDS) spent countless hours — to see the Disney film. We loved the silliness — the tea party rising up into the air. We came back to the Chuck Wagon serenading our fellow comrades with “A spoonful of sugar makes the medicine go down.” Mariann memorialized our duet in a poem that she wrote after George’s death.

George had an easy presence — a comfort in his own skin. It was a good fit for a job running the customer counter at Home Steam Laundry where he worked off and on. The owner liked him so much that he loaned him a suit when George married Mariann in December of 1965. Rev. Bob Breihan married the two of them in the chapel of the Methodist Student Center.

In an iconic photo taken in the fall of 1966, George Vizard is pictured in front of the University Co-op, standing on one leg on a folding chair. His arms extended, he is hawking The Rag, holding copies of the latest issue in both hands. He’s wearing his “whites,” so the photo was taken either before or after his shift at the Austin State Hospital. His wife, Mariann, is seated beside him.

George was listed as “Under Shitworker” — a level beneath Shitworker — in The Rag’s first staff box. In the next issue his name appeared as “Supersalesman.” The second issue carried his account of confrontations with the UT police over whether The Rag could be sold on campus. This argument was carried all the way to the U.S. Supreme Court, and settled in The Rag’s favor years after George’s death.

George’s political beliefs made him
bolder than most.

George’s political beliefs made him bolder than most. In 1965, he initiated a picket line at Roy’s Lounge (later the punk bar Raul’s) when the bar wouldn’t let George and a black friend in to use the phone. We kept that picket line going for weeks, gathering at the University YMCA/YWCA (the “Y”) at 22nd Street, and walking down Guadalupe to picket at the bar at 27th Street. The demonstration often drew a crowd from nearby fraternities that would jeer and taunt us with racist slurs, aiming ugly sexist insults at the women. George was arrested at one of those Roy’s Lounge demonstrations. 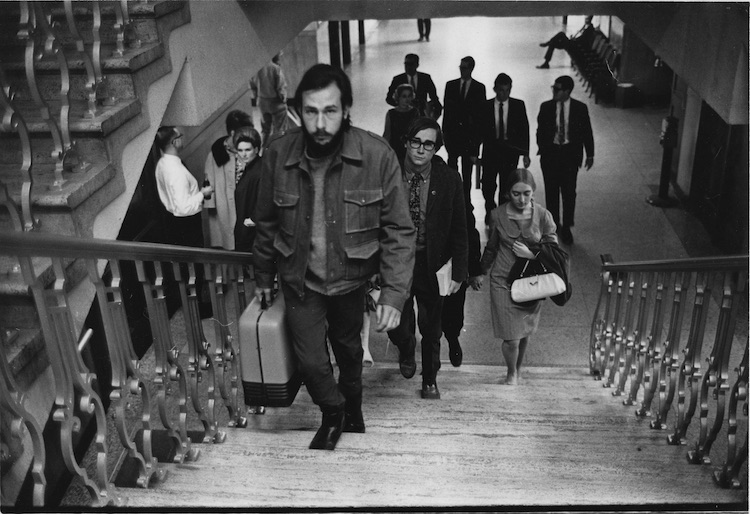 In January of 1967, George was arrested again at an antiwar protest of Secretary of State Dean Rusk. I remember standing at the Capitol doors, my knees shaking, while George — with a firm, fearless voice — told a Department of Public Safety (DPS) trooper we had a constitutional right to hand out the antiwar leaflets in our hands. Mariann and another woman, Mary Mantle, were inside being jostled by the troopers. Mariann recalls George coming to her rescue as a trooper held a baton against her throat. That got George arrested.

A few months later in April, SDS held an antiwar demonstration at the Capitol protesting Vice President Hubert Humphrey. George saw a counterprotester strike Sandra Wilson in the face with a picket sign. He yelled at the police; that led to an arrest several days later. In fact, the Board of Regents as plaintiff obtained an injunction to prohibit the presence of three non-students on campus, declaring that “openly opposing the actions of the United States of America in its foreign policy” is “against the best interests of the University of Texas.”

George was eating breakfast at the Chuck Wagon when police presented him with a warrant for his arrest. Going limp, as was nonviolent practice, he was dragged across the cement and pavement, his back bloodied so badly that he had to be taken to Brackenridge Hospital before being booked.

Lt. Gerding’s response was: ‘Well, Alice, I always told you this sort of thing could be dangerous.’

On July 23, 1967, George Vizard was shot to death in the cold locker of the convenience store where he worked. It was a Sunday. We knew Austin Police Lt. Burt Gerding from his nonstop surveillance, and would sometimes alert him to demonstrations. I called Gerding to tell him George had been murdered. His response was: “Well, Alice, I always told you this sort of thing could be dangerous.” Whether this was the provocative bravado typical of Gerding, or had a darker meaning, I will never know.

On the Sunday we learned of George’s death, there was a community gathering at the “Y.” Mariann did not think a demonstration at the Austin Police Department (APD) was appropriate. As news spread to other cities through the Vietnam Summer network, letters demanding action poured into APD and to local officials. There was no action. Instead, Mariann was subjected to a polygraph, and friends of George were questioned. Law enforcement officers filled the back seats of the funeral service at Weed Corley.

Rev. Bob Breihan, who had married George and Mariann, presided over the funeral at Weed Corley. My mother came with me out of respect for the young man whom she had met. Rev. Breihan, as he had done at the wedding, read from Ecclesiastes 3:

To every thing there is a season,
and a time to every purpose under the heaven:
A time to be born, and a time to die…

As was discovered much later, the lead homicide investigator concealed evidence that would have led immediately to Robert Zani, a former UT student with right-wing leanings, and a recently fired employee of the convenience store. Zani’s fingerprints were on a loaf of bread and wrappers on the counter, witnesses saw him there that Sunday, and a tip had come in identifying him as a possible suspect who had asked for help robbing the store.

It would be 14 years before Zani was arrested.

It would be 14 years before Zani was arrested after he and his wife Irma had committed several other murders, including, it is believed, of Zani’s mother in Tulsa, Oklahoma, and, in 1979, of a San Antonio realtor whose credit cards Zani was holding when he was taken into custody. When police interviewed Irma Zani in Mexico, she told them that Robert had “killed a guy in Austin… some place around the university.” Sentenced to 99 years in 1981 for George’s death, Zani died in the prison infirmary in 2011.

While Zani was imprisoned, papers belonging to former UT Police Chief Hamilton came to the attention of former Rag staffers. They had been kept at Hamilton’s house and sent to Half Price Books after his death. They revealed that Zani had volunteered to be a “narc” as early as 1964, and that Hamilton had introduced him to contacts at the Texas DPS for assessment. Because DPS records from the era have been destroyed, the question of whether Zani was a police “asset” at the time he murdered George Vizard remains unanswered.

I got on a plane to Santiago, Chile, on August 9th, just two and a half weeks after George’s death. I didn’t return to Austin until December 1969, and was of no great help to Mariann. George’s brother, Ed, accompanied her to the police station to see the evidence box and crime scene photos. But I know this: Mariann and I will be forever connected by the shared bond of knowing and loving George.

[Rag Blog associate editor Alice Embree was part of the original Ragstaff, as was George Vizard. She typed and wrote for The Rag, Austin’s legendary 60s-70s underground newspaper and was a contributor to Sisterhood is Powerful, a 1970 anthology of writings about women’s liberation. She was a founder of Red River Women’s Press. After receiving her master’s degree from UT-Austin in 1987, she served as a strategic planner for the Texas child support program. She has written for the Texas Observer, is a director of the New Journalism Project, and has been a union member and peace and justice activist in Austin for many decades.]