David McReynolds :
Donald Trump, the unexpected guest
with my curry

When I found my young friend, the attorney, was considering voting for Trump, it suggested to me that Trump might win. 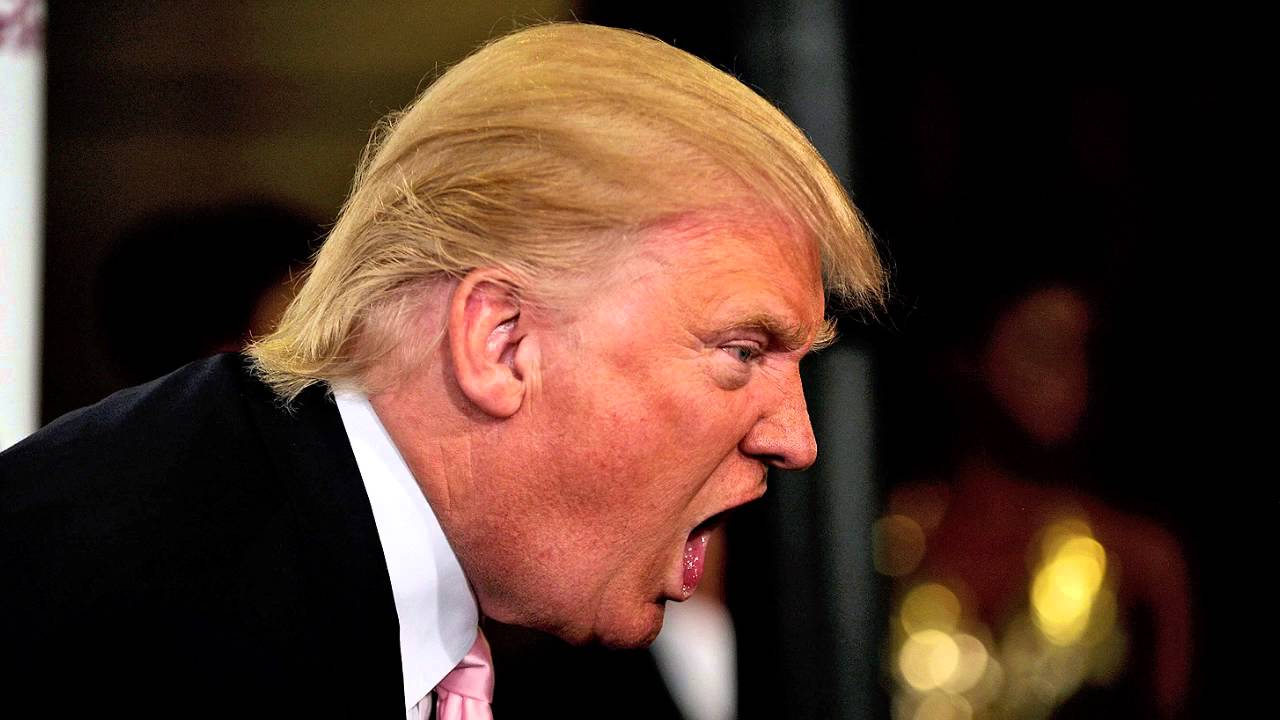 Feed me! Grab from No Holds Barred / YouTube / Creative Commons.

NEW YORK — A few weeks ago a couple of friends invited me to dinner at a nice little place, Heart of India, on Second Avenue and Fifth Street. One friend is a multi-talented master of film, and the other is a lawyer. I got to the restaurant early, and the first one to arrive was the young lawyer.

We were making idle conversation, waiting for the final friend. I was rambling on about how I had never seen any candidate so totally shredded as Donald Trump. The late night show, The Daily Show, every comic strip, The New York Times, the Washington Post, the Daily News.

Poor Trump was the butt of endless jokes, savage, without mercy. (Trevor Noah on The Daily Show does a particularly effective job.) I said the only comic the conservatives had on Trump’s side was Dennis Miller, of Fox, a stand-up comic whose sense of humor had stood up and left him years ago.

I said that it must be very hard for anyone to admit they actually like Trump, given this barrage of hostile humor, mocking everything from his tiny hands to his strange hair. And it was at that point that my attorney friend said he rather liked Trump and thought he might vote for him.

I was stunned, not sure if my friend was joking, but it seems he was serious.

It is worth looking at the reasons why anyone would consider backing Trump.

It is worth looking at the reasons why anyone would consider backing Trump. Leaving aside Trump’s racism, there are some points which Trump supporters believe justifies their support.

Some of the attacks on Trump reflect points where he has deviated from the “accepted norm” but where he might be right. My lawyer friend said he was tired of the attacks on Trump based on the mutual praise between Trump and Putin, saying he saw no reason why a productive working relationship couldn’t be established with Russia. I’d say score one for my friend — the attacks on Trump on this issue reflect Cold War positions held by almost all of his opponents in the GOP primary.

When Trump aroused a storm for suggesting he would meet with the North Koreans, why was this so swiftly dismissed? Hadn’t Obama said in 2008 that he would meet with the Iranians? Given the dangerous tensions with North Korea, who could oppose any move to explore a detente? Why mock Trump for his partial support for the nuclear deal with Iran — isn’t that a step in the right direction? And while one may find Assad a bloody dictator, why was it so wrong for Trump to suggest a settlement in Syria might involve leaving Assad in place? After all, the U.S. seems quite happy to leave the Saudis untouched.

Given the dangerous tensions with North Korea, who could oppose any move to explore a detente?

So too with Trump’s original statement that he would take an impartial view of the Israeli/Palestinian conflict. If anyone is serious about resolving that conflict, isn’t that the way to open negotiations? Granted, I think Trump’s original views on this topic have changed — Sheldon Adelson, the billionaire whose billions dramatically outrank those of Trump, is said to have pledged $100 million to the Trump campaign, enough, I suspect, to insure that Trump finds his way back to total support for the Israeli position.

So, too, with Trump’s pledge to aid our veterans. If, like me, you are a skeptic, knowing that Trump seems to think his time in a military school qualifies him as a veteran, and if you are aware he carefully avoided serving in Vietnam (so few billionaires did!), look, for a moment, at the massive frustration the general public has with Washington, the deadlock of our politics, the failure of the Veterans Administration to provide urgently needed care to veterans.

Or consider the impossible lines at our airports as the TSA, skilled at getting us to dump our water bottles or shampoo, but unable to find weapons (which we later learned made it through when the system was tested), lines which make us miss our flights, and you can begin to understand why the deepening silent fury of the public can turn to Trump. Perhaps, the thinking goes, a businessman can get the job done.

I remain baffled at my young friend’s
view of Trump.

I remain baffled at my young friend’s view of Trump, but surely it is important for us to try to understand one another. If we cannot dialogue, we are lost. My own view of Trump was beautifully summed up by Michael K. Vlock, a Republican investor who has given millions to the GOP in recent years and who said of Trump, to whom he will not be giving funds:

I’d go a bit further and say I find Trump (whom I suspect is a mental case) so gross, boorish, and egocentric that I am baffled that he has any followers, let alone the support of my bright, decent young attorney.

But let’s look at some of the things that should worry those who are convinced he is doomed to lose by a landslide.

Let us realize that Hillary does serve as the best argument for Trump.

First, his opponent is Hilary Clinton, who, on foreign policy, is a hawk and who, as the State Department report on her email shows, is a liar. One can half-way understand the generally decent Republicans who fought Trump all the way (even backing Ted Cruz, who, if it is possible, is worse than Trump), finally deciding that if the choice is between Trump and Hillary they will choose Trump. (This is still an impossibly wrong choice, in my view, but let us realize that Hillary does serve as the best argument for Trump).

Second, the reason Bernie Sanders has done surprisingly well is because, for working people, for the middle class, the past 10 years has seen their real wages drop, and has seen money concentrated in the 1%. (The Clinton’s themselves, with a net worth of over $100 million, are part of that 1% of the 1%.)

While much of the problem of the past eight years has been the congressional deadlock, for which the GOP must take full credit, it remains a deadlock — the government is not working. Trump seems like a strong man, one who can build walls, save jobs, make the wheels turn.

While trade deals, such as NAFTA, bring us lower-priced shirts, the cheap labor of Mexico, Vietnam, and China invites investors to shift their factories out of the country. Those trade deals put money in the hands of the very rich, leaving the towns and cities of middle America empty of factories and jobs.

Finally there is the elephant in the political room — the issue of racism.

Finally there is the elephant in the political room — the issue of racism, of the fear of the shifting color of America. White America will, in a short time, be a minority, and those of color — Hispanics, African Americans, Asians — will make up the majority. This accounts for the huge (white) crowds Trump draws, and the edge of violence in his speeches.

We cannot afford to ignore the danger that Trump will win white voters away from the Democrats. Nor can we trust the polls — as I suggested at the start of this, people have become embarrassed to admit they will vote for Trump, but this doesn’t mean that, in the privacy of the polling booth, they won’t vote for him.

These are not normal times — the rise of Trump is a mirror image of the astounding rise of Sanders, both are reactions to a very deeply troubled period when America seems to have lost its way, when wages have not risen, when government seems stuck. I do not mean that the two forces are the same. Sanders, whatever you think of his proposals (and I support them) has waged a decent campaign, appealing to our better angels.

Trump will use dog whistles.

Trump is a deeply racist candidate. No, he will not call Obama a “nigger” — times have changed too much for so crude a term. Trump will use dog whistles. But I ask those Republicans who may realize some elections are better lost than won, to look at Trump’s past.

A man who was brought into court over his issue of racial discrimination in his housing. A man who took a full page ad in The New York Times to call for the death penalty for the “Central Park Five” (the five black youths originally found guilty of the rape and beating of a white woman — and who eventually won their release when proven innocent). No, he didn’t call Obama a “nigger” — but he put money and time into the campaign to discredit the first African-American president by suggesting he was not an American citizen, by joining his voice with others who suggested Obama was a Muslim.

At a time when the police shootings of black youth have shocked most of us, Trump has gone out of his way to give unconditional support to the police. Polls taken of those serving in the military suggest that Trump has wide support there.

Trump may have legions of supporters who do not regularly make it to the polls.

When I found my young friend, the attorney, was considering voting for Trump, it suggested to me that Trump might win. That despite all — the Hispanic vote, the women’s vote, the labor vote, the African-American vote — despite all this, Trump may have legions of supporters who do not regularly make it to the polls. It is ominous that in the primary voting the GOP turnout has exceeded all records, while on the Democratic side, it has not matched previous records.

I still do not think Trump will win, that there is a strong chance he had never hoped to win the nomination, only to do well, and that he would be horrified if he had to live in the White House. His campaign has been so unusual, consisting of insulting all the Republicans whose support he needs, failing to build a campaign organization, to raise funds (and no, there is absolutely no chance Trump will fund his own campaign — he has never in his life risked a dime if he didn’t think it could turn a profit), and his illusion that a general election will be similar to a Republican primary.

We will see. But I ponder the thought of my young friend giving serious consideration to voting for Trump.

8 Responses to David McReynolds :
Donald Trump, the unexpected guest
with my curry